Filo Mining Corp. (TSX-V: FIL) (Nasdaq First North Growth Market: FIL) (OTCQX: FLMMF) is pleased to announce assay results from the initial three holes completed in the current drill program at Filo del Sol.  Drilling is progressing well, and encouraged by results to date, the Company is planning an extension of the program through May 2021.  Highlights are listed below, along with accompanying figures:

Commenting on these initial results, President and CEO Jamie Beck said “Our initial results at Filo del Sol continue to expand this remarkable deposit and we have yet to drill out of mineralization.  The primary goals this season were to expand the deposit to the north, and to start infilling the large gaps between our long, high-grade intersections from last season.  Holes 43 and 44 have been extremely successful in accomplishing the first goal, hole 40 is a great start at the second, and we expect future results to build on this success.”

With the intersection in FSDH043, the deposit extends over a total north-south distance of almost four kilometres.  Hole FSDH044 increases the east-west dimension of the deposit to at least 600m, and the extent, style and tenor of the mineralization in this hole do not suggest we are near to the eastern limit yet.   There are now five holes drilled to over a kilometre deep on the deposit, all of which ended in mineralization.  Copper-gold-silver deposits with these dimensions are not common globally.

Hole FSDH040 was planned to be a deep test of the breccia target in the 500m gap between FSDH032 and FSDH034.  This area is characterized by difficult drilling conditions because of intense hydrothermal alteration.  Although this makes for challenging drilling over approximately 200m at the top of the holes, it also provides compelling evidence that this area is underlain by the most intense part of the system and remains a top-priority drill target.  This hole was lost at a depth of 211.5m after intersecting the uppermost part of the mineralization.  Three holes are currently being drilled in this area.  So far, these have seen considerably better progress due to improvements in drilling fluids and techniques by the drilling contractor, leading us to expect better success in this highly prospective area.

Hole FSDH043 was collared 1,200m north of FSDH032 and drilled towards the southwest to test a geophysical anomaly with similar characteristics to the geophysical response seen between holes FSDH032 and FSDH034.  The hole was drilled to a depth of 1,068m, with mineralization starting at a depth of 300m, increasing with depth, and strongest at the bottom.  The centre of mineralization in this hole is located 1,000m north of the centre of FSDH032, with two holes currently underway (FSDH037 and FSDH041) in between.  This hole was drilled at an angle of -70 degrees, and the high-grade zone at the bottom may represent the deeper portion of a steeply dipping zone which could extend towards surface to the west of this intersection.

Hole FSDH044 was collared between and east of holes FSDH032 and FSDH034, intersecting the deposit 360m northeast of FSDH034 and 330m southeast of FSDH032.  It was drilled to a depth of 1,000m, ending in mineralization.  This entire hole was drilled outside of the resource envelope and extends the known mineralization over 200m to the east.  The strongest mineralization in this hole was hosted by an intense stockwork of quartz-sulphide “A” veins in rhyolite country rock showing moderate to strong potassic alteration.  This type of alteration and stockwork is characteristic of the centre of a porphyry system and its presence in this hole suggests that there is good potential to continue to expand the deposit towards the east. 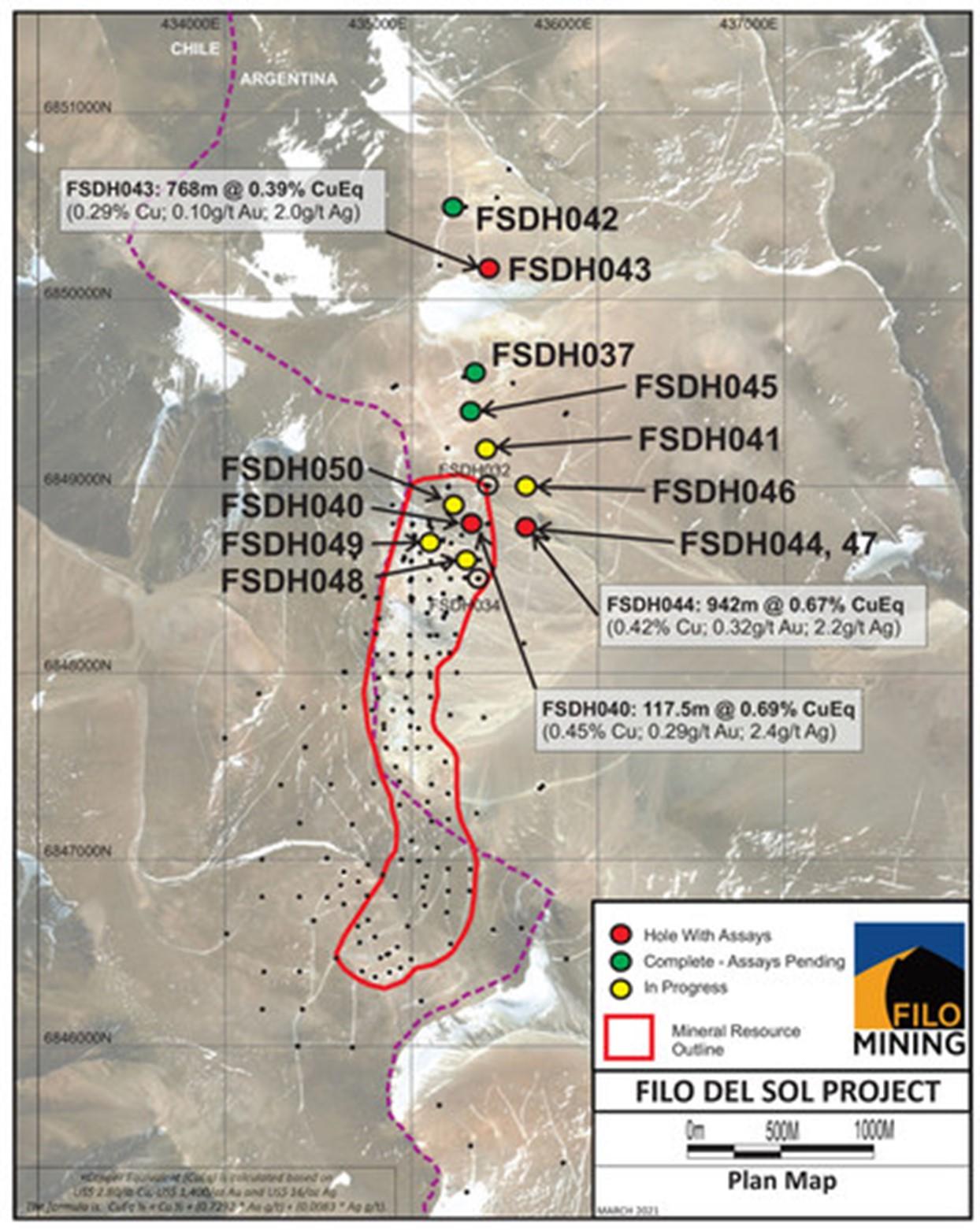 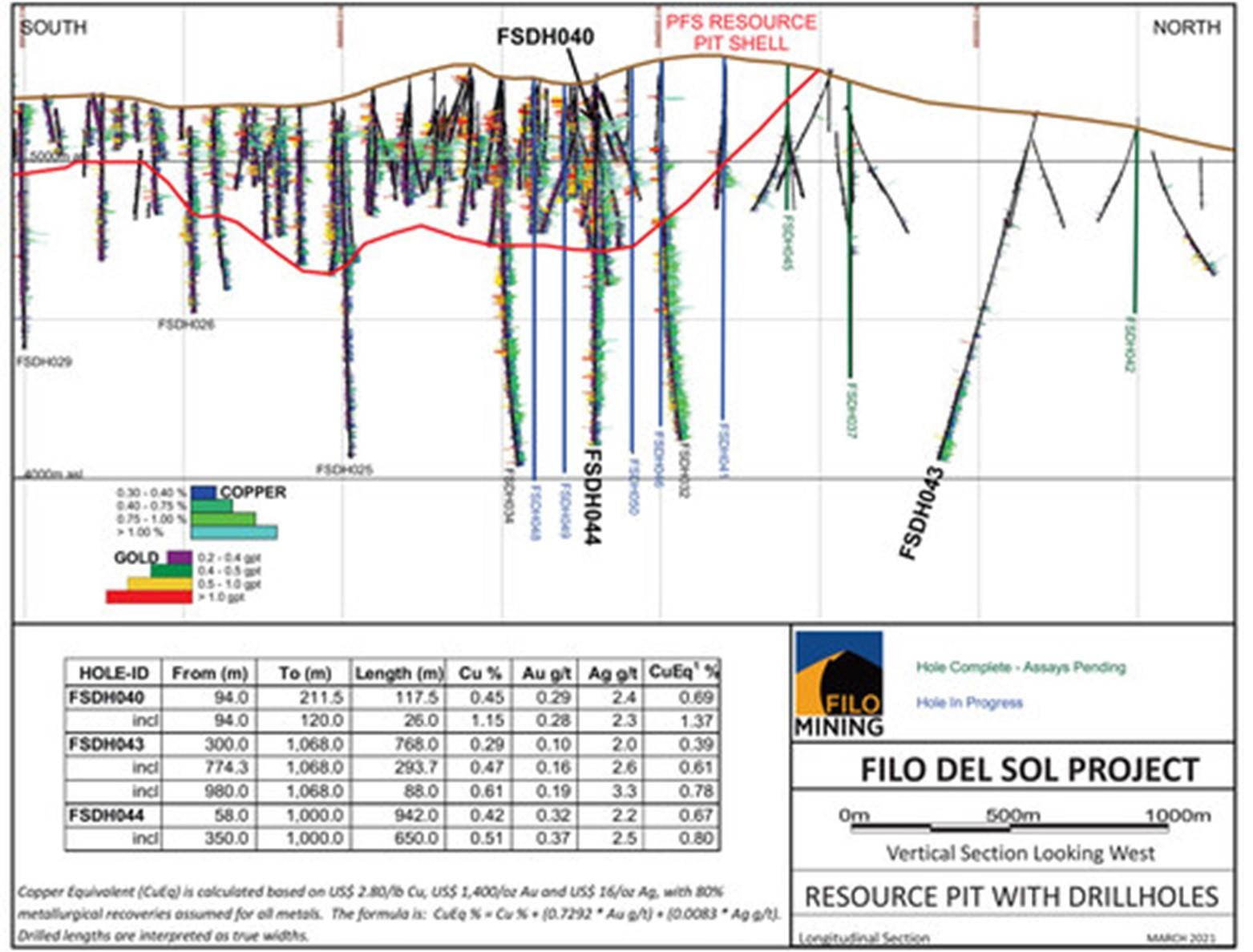 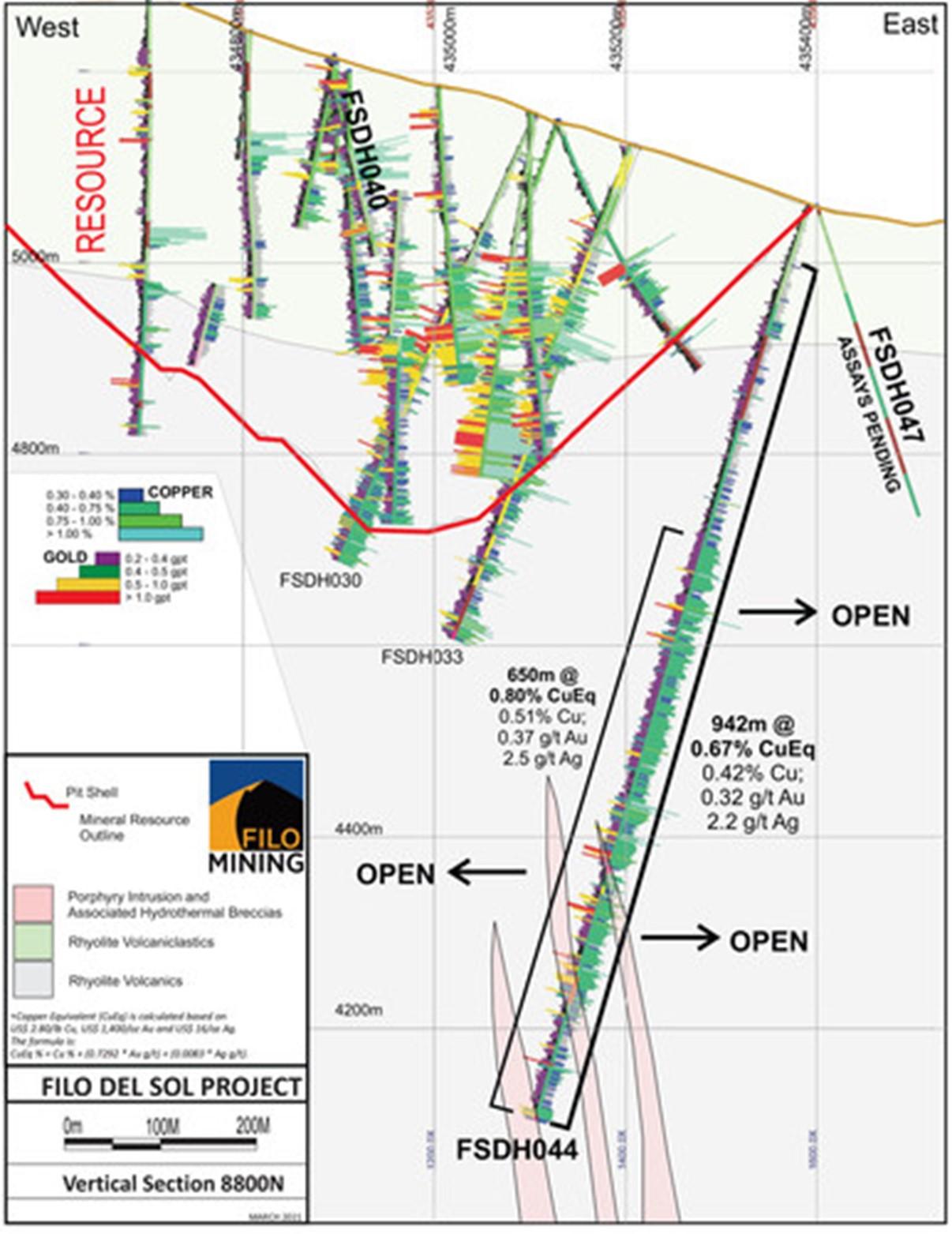 The scientific and technical disclosure for the Filo del Sol Project included in this news release have been reviewed and approved by Bob Carmichael, B.A.Sc., P.Eng. who is the Qualified Person as defined by NI 43-101.  Mr. Carmichael is Vice President, Exploration for the Company. Samples were cut at Filo Mining’s operations base near the town of Guañizuil, Argentina by Company personnel.  Diamond drill core was sampled in 2 metre intervals (except where shortened by geological contacts) using a rock saw for sulphide mineralization.  Oxide mineralization was cut with a core splitter in order to prevent dissolution of water-soluble copper minerals during the wet sawing process.  Core diameter is a mix of PQ, HQ and NQ depending on the depth of the drill hole.  Samples were bagged and tagged and packaged for shipment by truck to the ALS preparation laboratory in Mendoza, Argentina where they were crushed and a 500g split was pulverized to 85% passing 200 mesh.  The prepared samples were sent to the ALS assay laboratory in Lima, Peru for copper, gold and silver assays, and multi-element ICP and sequential copper analyses.  ALS is an accredited laboratory which is independent of the Company.  Gold assays were by fire assay fusion with AAS finish on a 30g sample.  Copper and silver were assayed by atomic absorption following a 4 acid digestion.  Samples were also analyzed for a suite of 36 elements with ICP-ES and a sequential copper leach analysis was completed on each sample with copper greater than 500ppm (0.05%).  Copper and gold standards as well as blanks and duplicates (field, preparation and analysis) were randomly inserted into the sampling sequence for Quality Control.  On average, 9% of the submitted samples are Quality Control samples.  No data quality problems were indicated by the QA/QC program.

Filo Mining is a Canadian exploration and development company focused on advancing its 100% owned Filo del Sol copper-gold-silver deposit located in Chile’s Region III and adjacent San Juan Province, Argentina.  The Company’s shares are listed on the TSXV and Nasdaq First North Growth Market under the trading symbol “FIL”, and on the OTCQX under the symbol “FLMMF”. Filo Mining is a member of the Lundin Group of Companies.