Drillhole FSDH046 has returned the longest mineralized intersection on the project to date, was collared 200m to the east of FSDH032, and demonstrates strong mineralization to over 1,400m below surface.

Commenting on the results, President and CEO Jamie Beck said, “Another outstanding result from our drilling this season at Filo del Sol.  Hole 46 is the deepest hole we have ever completed at Filo, returned well over a kilometre of mineralization, and extends the deposit at least 250 vertical metres below any of our previous holes.  Drilled 200m to the east of hole 32, it also increases the east-west dimension of the deposit, leaving it completely open to expansion in that direction.  Assay results from our remaining holes this season are expected shortly and plans for our next field campaign are well underway.”

A total of 11,280m was completed in fifteen holes during the 2020/2021 field season.  Drilling has now stopped for a short break while the Company prepares the drills and camp facilities for continuous, year-round field operations.

Hole FSDH046 was collared on Section 9000N, 200m to the east of FSDH032 and drilled parallel to that hole, at an angle of -71 degrees towards the west.  This hole is entirely outside of the currently defined resource and is the deepest hole drilled to date at 1570.7m.  The hole was collared in strongly weathered and leached microdiorite and transitioned to rhyolite volcaniclastics at a depth of 78m which also corresponds to the transition from the leached to the mineralized zone.  High-grade copper and gold mineralization starts at 380m along with quartz-alunite alteration and the hole continues in rhyolite, with primary textures obscured by intense alteration and strong stockwork veining, to a depth of 1,037m where there is a sharp transition to a porphyry intrusive.  This porphyry section is fairly homogeneous, cut by several types of porphyry veins, and continues to 1,198m where it transitions to a brecciated, heterogeneous interval of mixed rhyolite, porphyry, granite and andesite.

This mixed interval continues to 1,392m where there is a sharp contact with a second porphyry intrusive that continues to the end of the hole.  This porphyry is cut by typical A, B and D veins, and shows remnant potassic alteration with copper and gold grades decreasing from the contact towards the bottom of the hole.  Additional drilling is required to understand the size and geometry of this unit, which is currently interpreted as a typical late-mineral porphyry dyke.  Intrusive dykes like this are common in this type of system, and the deposit remains open for expansion at depth.

Hole FSDH050 was collared on section 8900N, 320m southwest of FSDH032, and drilled at an angle of -80 degrees towards the east to a final depth of 476.8m where it was ended due to drilling difficulties.  This hole drilled through a mix of intensely altered rocks comprising volcaniclastics, breccias and mafic dykes up to 450m. Lithologies in this interval are difficult to identify due to the intense high-sulphidation alteration, which consists of steam-heated alteration up to 90m (indicating the uppermost level of the HS system) and intense quartz-alunite down to the bottom of the hole. From 450m to the end of the hole it intersects a strong quartz-alunite altered rhyolite, with quartz and quartz-sulphide veins and disseminated pyrite-covellite-chalcocite mineralization. Included in this interval is the Silver Zone, from 424 to 450m, which is manifested here by very fine grained sulphides in veinlets cutting strongly alunite-altered rhyolite averaging 97.7 g/t silver over the interval and including a 2.7m interval of 709 g/t silver.  The hole ended in mineralization.

Assay results for eleven of the fifteen holes drilled this season have now been released, with the remaining four to be provided as results are received.  FSDH049 was drilled to a final depth of 515.3m, ending in mineralization, and was stopped as a result of drilling difficulties.  Holes FSDH051 (765.1m), FSDH052 (152.0m) and FSDH053 (150.0m) were still underway at the end of May when camp operations were suspended for winterization and maintenance. These holes were left prepared for future re-entry, however, timeline for deepening these will be dependent on the Company’s future drilling priorities.  Drilling is expected to resume in August and is planned to continue without interruption as we transition to year-round operations.  The Company plans to complete a resource update prior to the end of the year, which will incorporate data from the deep holes drilled since 2019, as well as several more to be completed in the late summer and fall. 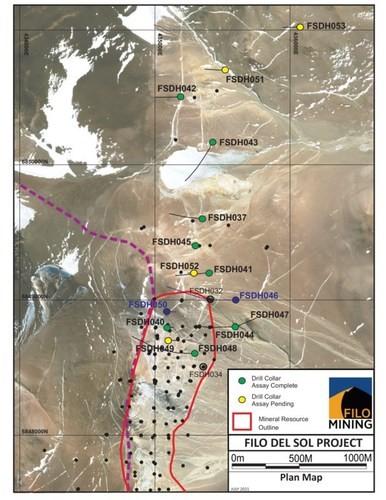 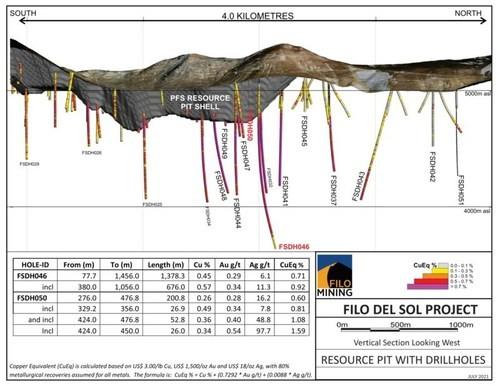 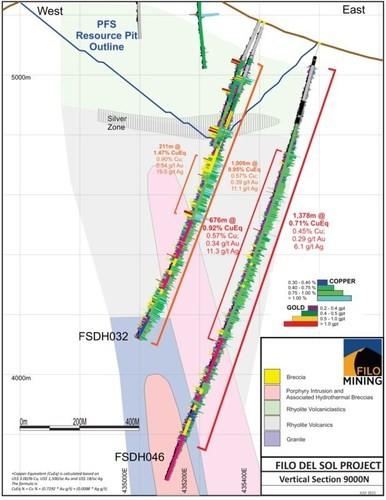 The scientific and technical disclosure for the Filo del Sol Project included in this news release have been reviewed and approved by Bob Carmichael, B.A.Sc., P.Eng. who is the Qualified Person as defined by NI 43-101.  Mr. Carmichael is Vice President, Exploration for the Company. Samples were cut at Filo Mining’s operations base near the town of Guañizuil, Argentina by Company personnel.  Diamond drill core was sampled in 2 metre intervals (except where shortened by geological contacts) using a rock saw for sulphide mineralization.  Oxide mineralization was cut with a core splitter in order to prevent dissolution of water-soluble copper minerals during the wet sawing process.  Core diameter is a mix of PQ, HQ and NQ depending on the depth of the drill hole.  Samples were bagged and tagged and packaged for shipment by truck to the ALS preparation laboratory in Mendoza, Argentina where they were crushed and a 500g split was pulverized to 85% passing 200 mesh.  The prepared samples were sent to the ALS assay laboratories in either Lima, Peru or Santiago, Chile for copper, gold and silver assays, and multi-element ICP and sequential copper analyses.  ALS is an accredited laboratory which is independent of the Company.  Gold assays were by fire assay fusion with AAS finish on a 30g sample.  Copper and silver were assayed by atomic absorption following a 4 acid digestion.  Samples were also analyzed for a suite of 36 elements with ICP-ES and a sequential copper leach analysis was completed on each sample with copper greater than 500ppm (0.05%).  Copper and gold standards as well as blanks and duplicates (field, preparation and analysis) were randomly inserted into the sampling sequence for Quality Control.  On average, 9% of the submitted samples are Quality Control samples.  No data quality problems were indicated by the QA/QC program.

Mineralized zones within the Filo del Sol deposit are typically flat-lying, or bulk porphyry-style zones and drilled widths in holes FSDH046 and FSDH050 are interpreted to be approximately true widths.

Filo Mining is a Canadian exploration and development company focused on advancing its 100% owned Filo del Sol copper-gold-silver deposit located in Chile’s Region III and adjacent San Juan Province, Argentina.  The Company’s shares are listed on the TSXV and Nasdaq First North Growth Market under the trading symbol “FIL”, and on the OTCQX under the symbol “FLMMF”. Filo Mining is a member of the Lundin Group of Companies.