Drillhole FSDH048 has returned the third best intersection on the project to date (measured by CuEq grade-thickness interval), is located 600m to the south of FSDH041, and demonstrates strong mineralization to over 1,100m below surface.

Commenting on the results, President and CEO Jamie Beck said, “Hole 48 is one of the first deep infill holes into the deposit, and we are confident that there will be many more like this to come.  Earlier this season, hole 41, drilled 600m north of 48, confirmed the presence of very high-grade zones within the deposit, and with holes 47 and 48, the size of the deposit continues to grow.  These two holes suggest an east-west dimension of at least 1,000m.  Combined with a north-south dimension of 2,000m between holes 25 and 43 and with over 1,000m in vertical extent, we see strong support for our expectation that Filo will grow into one of the largest copper-gold discoveries in a long time.”

A total of 11,280m was completed in 15 holes during the 2020/2021 field season.  Drilling has now stopped for a short break while the Company prepares the drills and camp facilities for continuous, year-round field operations.

Hole FSDH047 was drilled from the same platform as FSDH044 but angled towards the northeast at a dip of -70 degrees.  The hole was collared in strongly altered and leached sulphate-rich rock typical of the upper part of the Filo del Sol system, with a transition to less weathered rock between 80 and 100m.  The hole then continued in alternating rhyolite and microdiorite cut by a stockwork of weak to moderate A, B and D veinlets and affected by argillic and advanced argillic alteration to its end at 493.5m.

FSDH048 intersects various hydrothermal breccias between 155 and 300m, followed by a strongly altered rhyolite, which is cut by several porphyry intervals starting at 516m, and ends in granite. Strong mineralization occurs throughout the hole, with advanced argillic alteration accompanied by disseminated copper sulphides such as covellite-chalcocite-enargite (sometimes as rims) and abundant porphyry veins (types A, M, B and D). Towards the end of the hole, the remanent potassic alteration is visible and mineralization includes chalcopyrite and bornite as well.

A 325m interval of porphyry in this hole is one of the thickest porphyry intersections drilled to date, and together with several adjacent holes, defines a substantial mineralized porphyry intrusive.  Initial interpretation of this body suggests it is aligned in a NNE direction, parallel to the main structure which appears to control the distribution of alteration on surface.

Assay results for nine of the 15 holes drilled this season have been released, with the remaining six to come as results are received.   Hole FSDH046 was completed to a final depth of 1,570.7m, while the final five holes of the program (FSDH049 (515.3m), FSDH050 (476.8m), FSDH051 (765.1m), FSDH052 (152.0m) and FSDH053 (150.0m)) were suspended prior to reaching target depth.  Assay results for hole FSDH046 and the completed portions of the remaining holes are pending.  Drilling will be resumed in August and is expected to continue without interruption as we transition to year-round operations.  The Company plans to complete a resource update prior to the end of the year, which will incorporate data from the deep holes drilled since 2019, as well as several more to be completed in the late summer and fall. 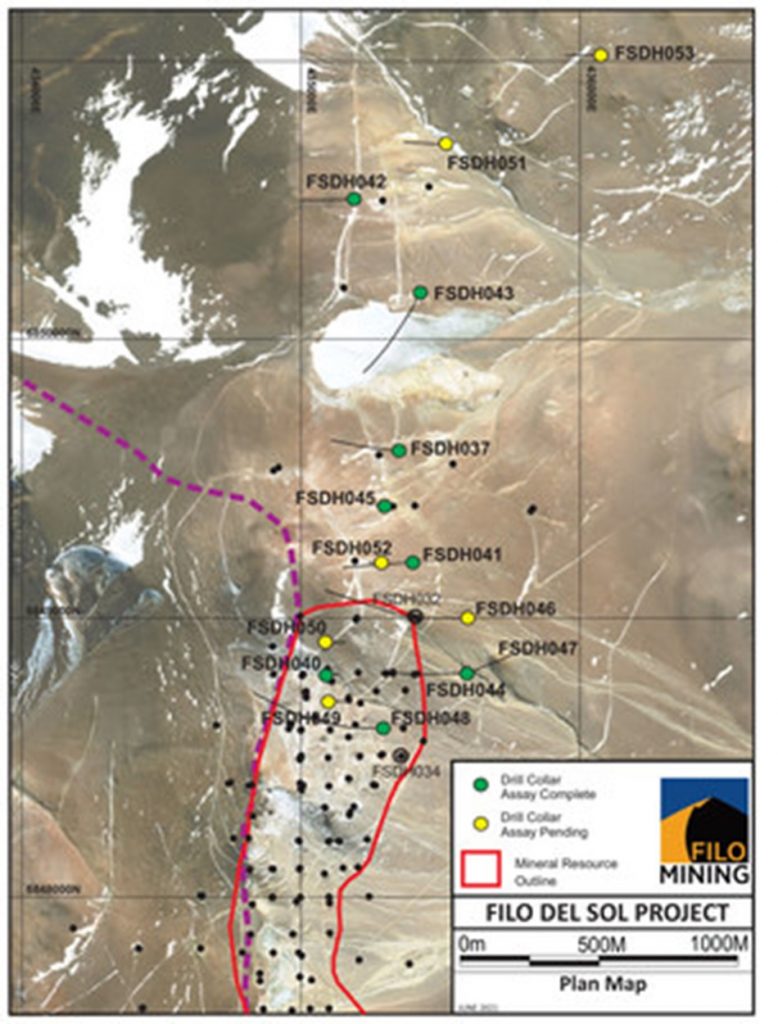 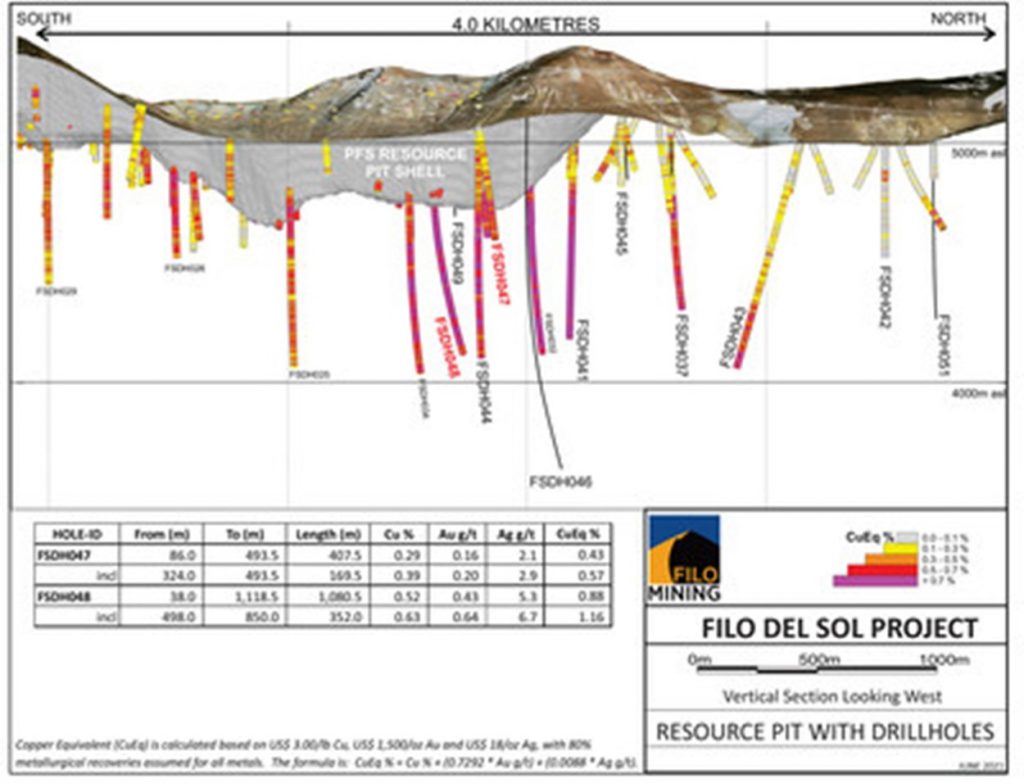 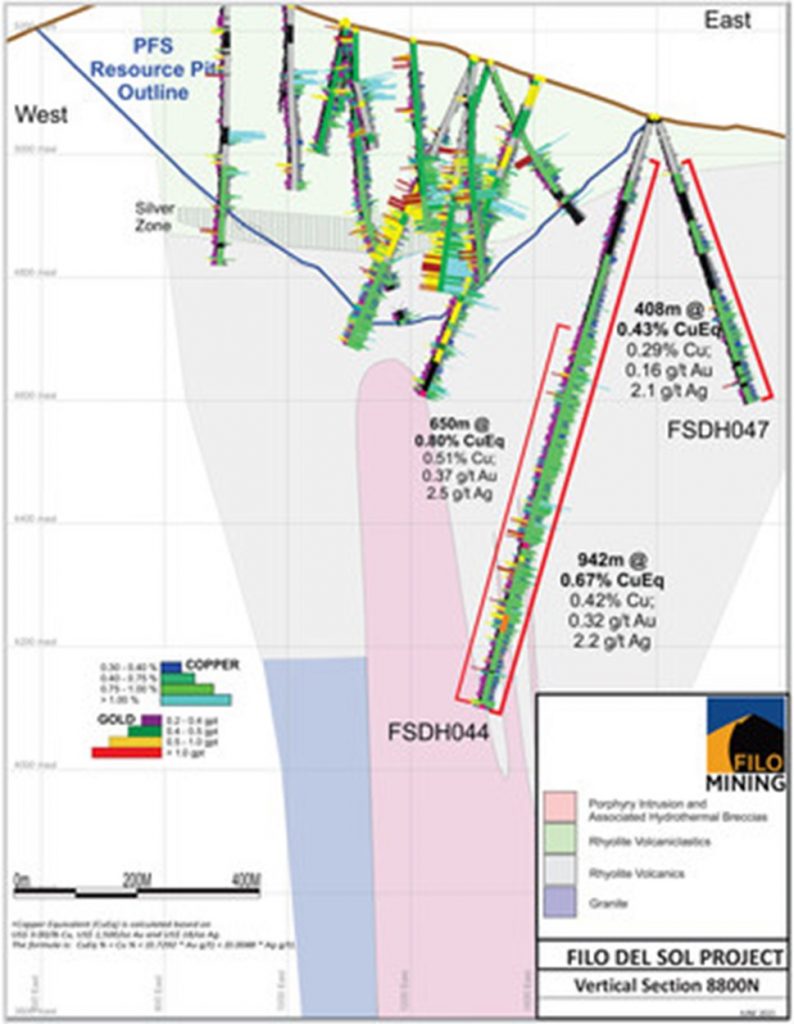 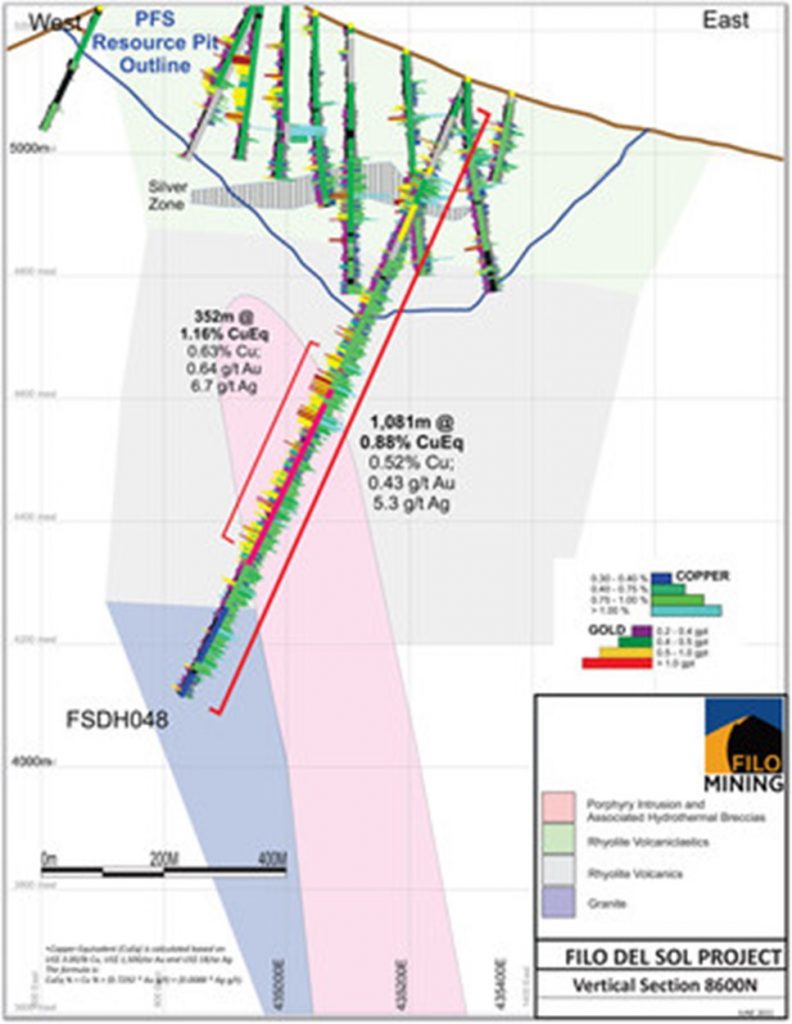 The scientific and technical disclosure for the Filo del Sol Project included in this news release have been reviewed and approved by Bob Carmichael, B.A.Sc., P.Eng. who is the Qualified Person as defined by NI 43-101.  Mr. Carmichael is Vice President, Exploration for the Company. Samples were cut at Filo Mining’s operations base near the town of Guañizuil, Argentina by Company personnel.  Diamond drill core was sampled in 2 metre intervals (except where shortened by geological contacts) using a rock saw for sulphide mineralization.  Oxide mineralization was cut with a core splitter in order to prevent dissolution of water-soluble copper minerals during the wet sawing process.  Core diameter is a mix of PQ, HQ and NQ depending on the depth of the drill hole.  Samples were bagged and tagged and packaged for shipment by truck to the ALS preparation laboratory in Mendoza, Argentina where they were crushed and a 500g split was pulverized to 85% passing 200 mesh.  The prepared samples were sent to the ALS assay laboratories in either Lima, Peru or Santiago, Chile for copper, gold and silver assays, and multi-element ICP and sequential copper analyses.  ALS is an accredited laboratory which is independent of the Company.  Gold assays were by fire assay fusion with AAS finish on a 30g sample.  Copper and silver were assayed by atomic absorption following a 4-acid digestion.  Samples were also analyzed for a suite of 36 elements with ICP-ES and a sequential copper leach analysis was completed on each sample with copper greater than 500ppm (0.05%).  Copper and gold standards as well as blanks and duplicates (field, preparation and analysis) were randomly inserted into the sampling sequence for Quality Control.  On average, 9% of the submitted samples are Quality Control samples.  No data quality problems were indicated by the QA/QC program.

Mineralized zones within the Filo del Sol deposit are typically flat-lying, or bulk porphyry-style zones and drilled widths in holes FSDH047 and FSDH048 are interpreted to be very close to true widths.