Filo Mining Corp. (TSX-V: FIL) (Nasdaq First North Growth Market: FIL) (OTCQX: FLMMF)  is pleased to announce additional assay results from the current drill program at Filo del Sol, including the discovery of a new zone of oxide gold mineralization 1.5 km north of the Filo del Sol deposit and the extension of the Filo high-grade silver zone by 600m to the north. Highlights are listed below, along with accompanying figures:

The new oxide gold discovery was intersected in hole FSDH042 which drilled 48m at 1.01 g/t gold. This hole is 260m away from the nearest drill hole, 1,500m north of the Filo del Sol deposit, and lies west of the main copper trend;

Commenting on the results, President and CEO Jamie Beck said “While the copper story at Filo del Sol builds, these results highlight the unique precious metals rich nature of the system. A new gold zone discovered in hole FSDH042, which intersected the edge of a modelled conductivity anomaly, confirms our expectation that the Filo del Sol system extends well beyond the known deposit. Additionally, partial results from holes FSDH037 and FSDH041 have led to a significant northern expansion of the known high-grade silver zone.  We are confident that as we continue to expand our drill footprint, we will continue to make new discoveries. The program is now in full swing, with five rigs turning, and we expect a steady stream of assay results over the next few months.”

Eight holes have been completed during the current season, with five holes in progress.  Full assay results have been received for four holes – three of which were reported in the March 31st news release, and FSDH042 is reported here.

Hole FSDH042 was drilled to a total depth of 648m, with the gold zone assaying 1.01 g/t gold over 48m between 262 and 310m.  The zone is characterized by oxidized intense silica alteration and hydrothermal brecciation which extends from surface to a depth of 400m in the host rhyolite.  Brecciation is particularly well-developed within the mineralized zone.

Hydrothermal breccia with intense silica alteration is mapped at surface in the area of FSDH042, and this target is further supported by surface geochemical samples with anomalous gold, silver and pathfinder elements.

Hole FSDH037 was started last season and drilled to a depth of 205m before the program was curtailed.  The hole was re-entered this season, and completed to a final depth of 882m, with full assay results pending.  Silver mineralization is hosted by quartz-alunite altered rhyolite with disseminations and veinlets of pyrite and associated chalcocite and covellite.

Hole FSDH041 was completed to a final depth of 1,046m with full assay results pending.  The silver zone in this hole has a more brecciated aspect and is characterized by abundant fine-grained pyrite with accessory chalcocite and covellite.

The silver zone represents a roughly tabular body which dips shallowly to the north, and now extends over a north-south distance of 2,050m and an east-west distance of about 500m.   Prior to this 600m extension, the approximate 1,450m x 500m x 25m interpretation of this zone represented a resource of 114 Mozs indicated (40.5Mt at 87.6 g/t silver) plus 22M ozs inferred (8.8Mt at 79.3 g/t silver).  The zone is roughly parallel to stratigraphy within volcaniclastic units in the host rock, and mineralization appears to be controlled by porosity and permeability within these units.  The intersections in holes FSDH037 and FSDH041 lie along the northern projection of this zone.  Our current interpretation is that the mineralization is a result of lateral fluid flow along favourable stratigraphic units, fed by a vertical feeder zone.  The interpreted feeder zone remains a compelling exploration target.

Full assays for holes FSDH037 and FSDH041, along with the remainder of the holes will be released in batches as they are received.  Drilling is planned to continue to the end of May, dependent on weather at site as winter approaches the Southern hemisphere, and the continued success of our COVID management plan. 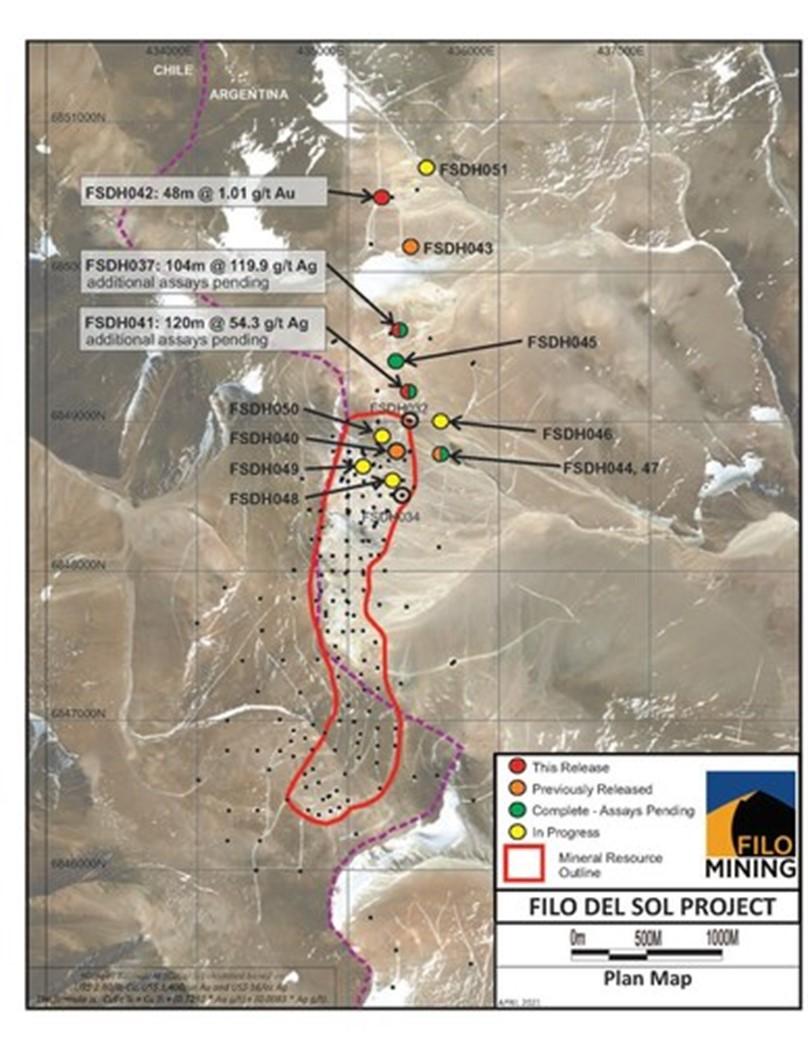 The scientific and technical disclosure for the Filo del Sol Project included in this news release have been reviewed and approved by Bob Carmichael, B.A.Sc., P.Eng. who is the Qualified Person as defined by NI 43-101.  Mr. Carmichael is Vice President, Exploration for the Company. Samples were cut at Filo Mining’s operations base near the town of Guañizuil, Argentina by Company personnel.  Diamond drill core was sampled in 2 metre intervals (except where shortened by geological contacts) using a rock saw for sulphide mineralization.  Oxide mineralization was cut with a core splitter in order to prevent dissolution of water-soluble copper minerals during the wet sawing process.  Core diameter is a mix of PQ, HQ and NQ depending on the depth of the drill hole.  Samples were bagged and tagged and packaged for shipment by truck to the ALS preparation laboratory in Mendoza, Argentina where they were crushed and a 500g split was pulverized to 85% passing 200 mesh.  The prepared samples were sent to the ALS assay laboratory in Lima, Peru for copper, gold and silver assays, and multi-element ICP and sequential copper analyses.  ALS is an accredited laboratory which is independent of the Company.  Gold assays were by fire assay fusion with AAS finish on a 30g sample.  Copper and silver were assayed by atomic absorption following a 4 acid digestion.  Samples were also analyzed for a suite of 36 elements with ICP-ES and a sequential copper leach analysis was completed on each sample with copper greater than 500ppm (0.05%).  Copper and gold standards as well as blanks and duplicates (field, preparation and analysis) were randomly inserted into the sampling sequence for Quality Control.  On average, 9% of the submitted samples are Quality Control samples.  No data quality problems were indicated by the QA/QC program.

Details of the methodology and assumptions used to estimate the resource estimate can be found in the Technical Report titled “NI 43-101 Technical Report, Pre-feasibility Study for the Filo del Sol Project” dated February 22, 2019 with an effective date of January 13, 2019.

The silver zone within the Filo del Sol deposit is typically gently dipping (~10 degrees) and drilled widths in holes FSDH037 and FSDH041 are interpreted to be very close to true widths.  Additional drilling is required to understand the geometry of the intersection is FSDH042, and its true width is currently uncertain.

Filo Mining is a Canadian exploration and development company focused on advancing its 100% owned Filo del Sol copper-gold-silver deposit located in Chile’s Region III and adjacent San Juan Province, Argentina.  The Company’s shares are listed on the TSXV and Nasdaq First North Growth Market, and on the OTCQX. Filo Mining is a member of the Lundin Group of Companies.