Explor Starts an Exploration Program on the Launay Nickel Property

Explor Starts an Exploration Program on the Launay Nickel Property 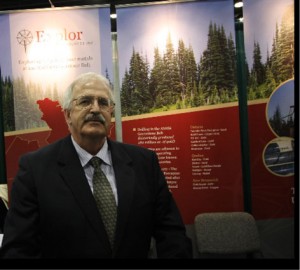 Explor Resources Inc. (TSX-V:EXS) (OTCQX:EXSFD) (FRANKFURT:E1H1) (BERLIN:E1H1) is pleased to announce the start of Phase I of its exploration program on the Launay Nickel Project. The Launay Nickel Project is comprised of 2249.4 hectares and is located 20 kilometers west of Amos, Quebec and 45 kilometers northwest of Val d’Or, Quebec. Phase I which consisted of 60 kilometers of line cutting and geophysics to determine targets has been completed. Phase ll which will consist of a 1000 meter diamond drill program will commence by mid June 2014.

The Launay Nickel Project is contiguous with and to the northwest of the 4,080 hectare Royal Nickel Property as shown in the attached plan. The Royal Nickel Property covers the entire Dumont nickel deposit which is cited to contain a measured resource of 372 million tonnes at 0.28% nickel and an indicated resource of 1.29 billion tonnes at 0.26% nickel as stated on the Royal Nickel website. Once in operation, the mine will produce nickel for over 30 years. Construction and operation of the mine and processing facilities will be made easier by the existence of excellent infrastructure, including roads, rail and access to low-cost power.

The structure that contains the Dumont nickel deposit is defined by a magnetic high geophysical signature that is bounded by two faults that cross the Royal Nickel property in a northwest to southeast direction. The same two parallel faults and magnetic high continues through Explor’s ground to the northwest. Excellent access is provided by a logging road that connects the Launay-Guyenne road to the property, approximately 4.5 km from the Town of Launay.

The most obvious topographical feature in the area is Lake Doyon, approximately 1.3 km to the west of the property as well as gently rolling hills consisting of outcrops and eskers. Royal Nickel Corporation a private company, has completed 174,000 meters of diamond drilling on the property to date. Anomalous platinum and palladium grades have been intersected on the property. Recent drilling by RNC has outlined PGM enrichment (greater than 0.5 g/t) over 5 m within the Central Zone.

The mineralized zones are contained in mafic volcanic rocks. In general, the geological structure is a nickel- bearing dunite unit that is bounded on the north by a gabbro unit and on the south by a peridotite unit. The mineralization includes magnetite bearing dunite, containing olivine with pentlandite, azurite, and millerite as nickel-bearing minerals.

Explor Resources Inc. is a publicly listed company trading on the TSX Venture (EXS), on the OTCQX (EXSFD) and on the Frankfurt and Berlin Stock Exchanges (E1H1).

Explor Resources Inc. is a Canadian-based natural resources company with mineral holdings in Ontario, Quebec, Saskatchewan and New Brunswick. Explor is currently focused on exploration in the Abitibi Greenstone Belt. The belt is found in both provinces of Ontario and Quebec with approximately 33% in Ontario and 67% in Quebec. The Belt has produced in excess of 180,000,000 ounces of gold and 450,000,000 tonnes of cu-zn ore over the last 100 years. The Corporation was continued under the laws of Alberta in 1986 and has had its main office in Quebec since 2006.

Explor Resources Flagship project is the Timmins Porcupine West Project located in the Porcupine mining camp, in the Province of Ontario. The TPW mineral resource includes the following: