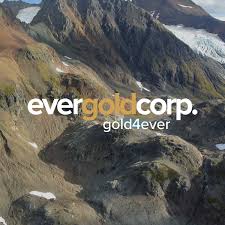 Evergold Corp. (TSX-V: EVER) is pleased to announce that it has closed a non-brokered private placement financing for aggregate gross proceeds of $1,177,450 to certain funds managed by Sprott Asset Management LP, Middlefield Capital Corp., and Backer Wealth Management Inc. Under the Financing, the Company issued 1,757,388 flow-through common shares at a price of $0.67 per FT Share, a premium to both the 15 and 30-day VWAPs, and a price per share more than three times that of the Company’s 20-cent initial public offering last fall. Inclusive of the estimated $1,129,000 net proceeds of the Financing, plus $547,923 received to date from the exercise of 2,312,550 in-the-money warrants, less prepaid exploration expenses approximating $300,000, the Company presently has estimated working capital of $3,581,400.

“Selectively placing a small offering now, with several of the most prominent funds and top fund managers in the business, is the prudent thing to do, and helpful to our longer-term prospects,” said Kevin Keough, President and CEO. “In the event that we have discovery success with our Phase I drill programs this summer, the scale of our programs will expand and our needs for capital increase also. Given the ongoing economic disruption and market volatility, we can’t be entirely sure markets will be open to us at that time. We’re therefore happy to have the support of Sprott, Middlefield and Backer Wealth, the more so for the added attention to our plans that their involvement in Evergold will bring.”

The proceeds raised from the Financing will be used to incur “Canadian exploration expenses” that are “flow-through mining expenditures” (as such terms are defined in the Income Tax Act (Canada)). The Company is fully funded to complete this season’s first-ever drilling of high priority targets on the Company’s flagship Snoball and Golden Lion properties in northern British Columbia, Canada. At Snoball, where key drill pads are already in place, drilling is expected to get underway following camp setup shortly after June 15. At Golden Lion, where field work commenced Wednesday this week with a survey of target areas and proposed drill sites, camp mobe-in will start approximately June 10 and, shortly thereafter, geophysical, geochemical and geological programs to refine drill targets. Drilling will get underway at Golden Lion after July 20.

In connection with the Offering the Company has paid a finder’s fee of $40,000 cash and 35,147 finder’s warrants. Each Finder’s Warrant is exercisable into one common share of the Company at a price of $0.67 per common share until May 21, 2022. All securities issuable pursuant to the Financing, including the FT Shares and Finder’s Warrants, are subject to a four-month hold period, expiring September 22, 2020.

Shareholders are reminded that the 18 cent warrants issued further to the Company’s July 2017 seed round private placement financing, and the 25 cent warrants issued further to the October 2019 initial public offering, are now well in the money. To date, 2,312,550 warrants have been exercised, resulting in a cash inflow to treasury of $547,923 and a current shares outstanding figure of 31,691,405. 10,666,525 in-the-money warrants remain to be exercised, and shareholders are encouraged to do so.

The Company has commenced trading on three German stock exchanges: Frankfurt (March 31), Munich (April 25) and Tradegate (April 29). The ticker symbol is 5EG. The Company has received a ready audience in the German market and trading in the Company’s shares since listing has been strong, with an aggregate volume of 7.4 million shares on the three exchanges since the initial listing on Frankfurt on March 31st.

Evergold Corp. has been assembled by a team with a record of recent success in British Columbia, combining four 100%-owned properties in prime geological real estate from one of BC’s best-known geologists, C.J. (Charlie) Greig, with seasoned management and a qualified board. The Company’s flagship assets consist of the 3,545 hectare Snoball property, located in the heart of BC’s famed Golden Triangle only 12 kilometres off highway 37, where the Company believes it has located the source of a large, strong gold-silver anomaly up-slope of previous work, and the 5,099 hectare Golden Lion property, located well to the east of Snoball in similar Stikine terrane rocks, at the north end of the Toodoggone region, where multiple strong gold-silver-copper targets have been outlined. The Company intends to carry out the first-ever drilling of selected targets on both properties in the now unfolding 2020 field season.