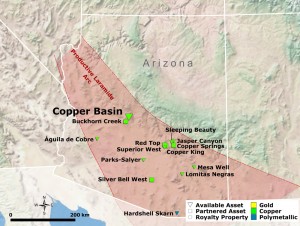 Eurasian Minerals Inc.  (TSX-V:EMX) (NYSE MKT:EMXX) is pleased to announce the signing of an Exploration and Option to Purchase Agreement through its wholly owned subsidiary Bronco Creek Exploration, for the Superior West porphyry copper project with Kennecott Exploration Company part of the Rio Tinto Group. The project is located adjacent to the Resolution porphyry copper project within the Superior Mining District, approximately 100 kilometers east of Phoenix, Arizona.

Commercial Terms Overview. Pursuant to the Agreement, Kennecott can earn a 100% interest in the project by making a cash payment upon execution of the Agreement of US$149,187, and thereafter completing US$5,500,000 in exploration expenditures and paying annual option payments totaling US$1,000,000 before the fifth anniversary of the Agreement.

Upon exercise of the option EMX will retain a 2% NSR royalty on the properties. Kennecott has the right to buy down 1% of the NSR royalty covering 14 claims which are optioned (the “Optioned Claims”) from underlying claim holders by payment of US$4,000,000 to EMX. Except with respect to the Optioned Claims, the EMX royalty is not capped and not subject to buy-down.

After exercise of the option, annual advanced minimum royalty payments are due starting at US$125,000 and commencing on the first anniversary of the exercise of the option. The AMR payments will increase to US$200,000 upon completion of an Order of Magnitude Study or Preliminary Economic Assessment. Kennecott may make a one-time payment of US$4,000,000 to extinguish the obligation to make AMR payments. In addition, if not previously extinguished, total AMR payments after the OMS or PEA milestone payment are capped at US$4,000,000, and all AMR payments cease upon production from the properties.

In addition, Kennecott will make milestone payments consisting of:

Property Overview. The Superior West project comprises more than 680 federal lode mining claims covering more than 5,100 hectares in the vicinity of Superior, Arizona. The boundary of the property lies less than two kilometers from the Resolution copper deposit. The project covers a broad area of post-mineral cover rocks ringed by outcrops exhibiting alteration and mineralization characteristic of the margins of porphyry copper deposits. The alteration patterns within these outcrops vector towards the covered areas and form at least two distinct porphyry copper target areas.

In the northern target area, the altered outcrops, as well as ten historic, widely-spaced drill holes that intersected altered and mineralized rocks across more than 20 square kilometers, suggest multiple concealed porphyry centers. This target area also includes the western projection of the fault truncated portion of the historic Magma Vein that vectors mineralogically and geochemically onto EMX’s property. EMX believes that the Magma Vein mineralization is related to and sourced from a separate, not yet discovered porphyry copper system. EMX’s targeting principally stems from structural re-constructions and re-interpretation of the district geology, surrounding porphyry and porphyry-related deposits in the district, and information from the ten historic drill holes (approx. 10,180 m) completed by Superior Oil, Kennecott, and others in the late 1960s, 1970s and 1990s.

In the southern target area, vein-hosted base and precious metals bearing replacement bodies and vein stockwork and disseminated (oxidized) sulfide mineralization occur in outcrops adjacent to post-mineral cover rocks and vector towards areas of cover, indicating the presence of another concealed porphyry center within the EMX land position.

EMX and Kennecott are designing work programs to follow-up on the results of previous exploration. Kennecott will be the operator with EMX conducting work through the program’s first year.

Note: The nearby mines and deposits in the district provide context for EMX’s Superior West Project, which occurs in a similar geologic setting, but this is not necessarily indicative that the project hosts similar mineralization.