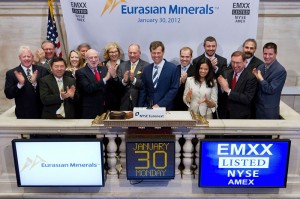 Eurasian Minerals Inc. (TSX Venture: EMX; NYSE MKT: EMXX) announce the Company’s participation in ongoing discoveries at the Malmyzh porphyry copper-gold district in Far East Russia.  Eurasian Capital, an EMX business unit led by Paul Zink, identified InterGeo Resources LLC (“IGR”), a privately-held exploration company, as an early-stage  investment opportunity in 2011.   EMX has invested US $3.04 million through four separate private financings,  and is IGR’s largest shareholder with a 36% equity position on a fully-diluted basis.   The Malmyzh  exploration and mining licenses are held by a joint venture between IGR and Freeport McMoran Exploration  Corporation (“Freeport” or “FMEC”), with IGR operating and managing the project.  EMX believes Malmyzh is an exciting grassroots discovery that is rapidly developing into a belt-scale exploration play.

IGR  has  advised  that  diamond  drilling  confirmed  porphyry  copper-gold  mineralization  at  fourteen separate  target areas within a district-scale, 16 by 5 kilometer intrusive corridor concealed beneath a shallow cover of soil and vegetation.  IGR reported drill intercepts from two of the fourteen prospects as highlighted below:

The joint venture is currently advancing the project towards initial resource definition, and designing an exploration program to: a) follow up on multiple zones of higher-grade copper-gold mineralization, b) expand  the  drill defined extent of the fourteen known centers of copper-gold mineralization, and c) conduct initial drill tests of additional target areas identified from geophysical and surface geochemical anomalies along the belt.

Malmyzh Project Background.  Malmyzh is located in Far East Russia, approximately 220 kilometers northeast of the city of Khabarovsk and the nearby border with China.  The project has excellent logistics and infrastructure, including high voltage power lines, a paved national highway, and a rail line that are all nearby to the property.   As well, the Amur River lies within two kilometers of the project boundary and is directly linked to major shipping ports.  The property is covered by two mining and exploration licenses that total 153 square kilometers.

Freeport (previously Phelps Dodge) identified Malmyzh as a prospective target for porphyry copper mineralization  in  2006,  and  over  a  three-year  period  conducted  surface  geochemical  sampling, geophysical  surveys,  and  reconnaissance  drilling  totaling  eight  core  holes  (1,126  meters).  This reconnaissance drilling intersected copper-gold mineralization in five of the early-stage target areas. Subsequently, IGR earned a 51% ownership interest in Freeport’s Russian subsidiary that controlled the property and other assets in 2011 by completing 12,000 meters of drilling.  Freeport does not retain any “clawback” or NSR provisions under the terms of the agreement with IGR.  Should either party reduce its interest to under 10% of the joint venture, their interest reverts to a ½ cent (US) per pound payment of recoverable copper equivalent in the  proven and probable categories of mineral reserves derived from each feasibility study through the life of the project.

The IGR team is led by President and CEO Tom Bowens, and includes key personnel with in-country expertise  and a track record of exploration discovery and project development.   EMX is contributing executive management guidance to IGR with the appointment of David M. Cole as the Chairman of the Board of Managers and M. Stephen Enders as a board member.

Malmyzh Geologic and Exploration Overview.  Malmyzh’s porphyry centers occur as Cretaceous-aged dioritic to granodioritic stocks that intruded and altered siltstone and sandstone sedimentary sequences. The project’s terrain consists of low relief hills within the Amur River valley, with bedrock covered by a relatively  shallow  veneer  of  colluvium  and  alluvium. Drill  targeting  has  focused  principally  on geophysical and soil geochemical anomalies, with an excellent track record of success to date.

Copper-gold porphyry mineralization consists of near-surface (i.e., within 2-50 meters of the surface) zones  of   chalcocite  enrichment  grading  into  chalcopyrite-rich  and  chalcopyrite-bornite-magnetite mineralization.   Copper-gold mineralization occurs in the porphyry intrusives, as well as in the altered and stockworked sedimentary wall rocks.  To date, 90 drill holes (29,300 meters) have been completed with 59 holes intersecting significant (>0.3% copper equivalent) copper-gold mineralization.  The Central Zone is the most advanced  prospect,  having been drill defined at a 200 meter spacing.   Drill results reported by IGR are summarized in the table below.

Comments on Drilling, Sampling, Assaying, and QA/QC.   The Malmyzh exploration samples were collected in accordance with accepted industry standards and procedures.  The samples were submitted to Ingiredmet  Laboratories  (ISO  9001:2008  accredited)  in  Irkutsk,  Russia  for  assay  and  geochemical analysis.  Gold was analyzed by fire assay with an AAS finish, and copper analyses were determined with aqua regia digestion and ICP AES techniques.  IGR conducts routine QA/QC analysis on all assay results, including the systematic utilization of certified reference materials, blanks and field duplicates.  EMX has reviewed the drill core and QA/QC results, and conducted independent field reviews and due diligence check sampling that confirmed the IGR results.

About EMX. Eurasian Minerals is a global gold and copper exploration company utilizing a partnership business model to explore the world’s most promising and underexplored mineral belts. EMX currently has  projects  in  eleven  countries  on  five  continents,  and  generates  wealth  via  grassroots  prospect generation, strategic acquisition, and royalty growth.

Mr.  Michael  P.  Sheehan,  CPG,  a  Qualified  Person  as  defined  by  National  Instrument  43-101  and employee  the Company, has reviewed and verified the technical information contained in this news release.

The NYSE MKT, TSX Venture Exchange and the Investment Industry Regulatory Organization of Canada do not accept responsibility for the adequacy or accuracy of this release.

This news release may contain “forward looking statements” that reflect the Company’s current expectations and projections about its future results. When used in this news release, words such as “estima te,” “intend,” “expect,” “anticipate,” “will” and similar expressions are intended to identify forward-looking statements, which, by their very nature, are not guarantees of the Company’s future operational or financial performance, and are subject to risk s and uncertainties and other factors that could cause Eurasian’s actual results, performance, prospects or opportunities to differ materially from those expressed in, or implied by, these forward -looking statements. These risks, uncertainties and factors may include, but are not limited to: unavailability of financing, failure to identify commercially viable mineral reserves, fluctuations in the market valuation for commodities, difficulties in obtaining required approvals for the development of a mineral project, expectations of project funding by joint venture partners and other factors.

Readers are cautioned not to place undue reliance on these forward-looking statements, which speak only as of the date of this news release or as of the date otherwise specifically indicated herein. Due to risks and uncertainties, including the risks and uncertainties identified in this news release, and other risk factors and forward -looking statements listed in the Company’s MD&A for the six-month period ended June 30, 2012 (the “MD&A”) and most recently filed Annual Information Form for the nine-month period ended December 31, 2011 (the “AIF”), actual events  may  differ  materially  from  current  expectations.  More  information  about  the  Company,  including  the MD&A, the AIF and financial statements of the Company, is available on SEDAR at www.sedar.com and on the SEC’s EDGAR website at  www.sec.gov.