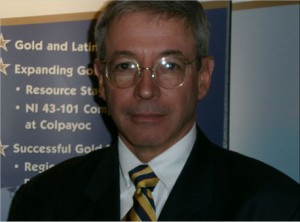 Estrella Gold Corporation (TSX VENTURE:EST) is pleased to announce that its joint venture partner Mines Management, Inc. (NYSE MKT:MGN)(TSX:MGT)  has elected to extend the exploration program at La Estrella gold-silver project in central Peru under the terms of its agreement with Estrella, to earn a 75% interest in the property. Mines Management has notified Estrella of their intent to continue with the project, and they have made their annual earn-in lease payment to the Company. Mines Management has submitted proposed modifications to their previously approved exploration drilling permit to the appropriate Peruvian regulatory agencies, and currently, they are awaiting governmental approval of these modifications.

Because a strong positive correlation between higher grade gold mineralization and moderate to high values of chargeability had previously been demonstrated on La Estrella Project, a 3-D Induced-Polarization/Resistivity survey by Val D’Or Geophysics Peru was contracted in December 2012 to February 2013 to provide indications of mineralized trends and directions useful for exploration. The survey identified a large, previously unknown area of anomalous chargeability extending north and northwest from the 2012 area of interest for a distance of approximately 1,400 meters. This new area, when combined with previously known areas of anomalous chargeability, forms a prospective zone over 2,000 meters in N-S extent and up to 1,100 meters in E-W extent. Mines Management expects that targets for the next phase of drilling will include sites across these newly-recognized chargeability trends. Other targets will include follow-up of structurally-controlled high grade silver intercepts as in E-29 with 26.1 m @ 0.04 gpt Au and 157 gpt Ag. All drillhole data is posted and available for review on Mines Management’s website at www.minesmanagement.com.

Activities thus far in 2013 include the modification of exploration permits to encompass the expanded areas prospective for drilling, and metallurgical studies with completion expected in May, 2013. Activities planned for the remainder of the year will be conducted in accordance with Mines Management’s current cash conservation activities.

La Estrella property contains approximately 2,500 hectares of land within the Central Peru Polymetallic Belt, and is located 130 km south of Huancayo in the Department of Huancavelica, a region with a history of silver mining dating to the 1500’s. The Project is in an area of established infrastructure, with roads and electricity, and lies within 30 km of Minera Buenaventura’s historic Julcani Silver Mine which began operation in 1955. Mines Management conducts work on the project subject to its agreement to earn 75% of the project through US$5 million in exploration activities and a preliminary economic assessment (see News Release April 10, 2012).

La Estrella concessions cover a large area of gold-silver mineralization hosted by a thick west-dipping dacite sill beneath a sequence of andesitic volcanic rocks. Gold mineralization occurs as pyrite-associated disseminations in silicified and phylically-altered dacite; also as quartz-sulfide stockworks in brecciated or structurally-disrupted andesitic rocks. Higher-grade silver intervals (greater than 100 gpt) occur with galena and a variety of sulfosalts in mineralized structures cutting the dacite sill and volcanic package, reflecting an event later than the more widespread gold-silver dacite-hosted mineralization. To date, historic and current sampling and drilling activities have identified a roughly tabular zone of mineralization generally conformable to the dacite sill over 1,500 meters in strike length, 300-500 meters in width, and 50-150 meters thick. As previously mentioned, geophysical indications of mineralization include this known area and extend across a strike length of 2000 m and up to 1100 meters width in the central portion of the deposit. The system remains open to the north, south, west, and at depth in the central, widest portion of the anomalous zone.

Mineral exploration is inherently risky and Estrella increases the chances of success as a “Prospect Generator” focused on gold exploration in Latin America. Estrella identifies and acquires new mineral properties, conducts initial, low-cost exploration to define a potential new deposit and then forms joint ventures with other companies that will provide funding for more advanced exploration. Estrella has twenty-two active exploration properties in Peru, with five (5) held in venture agreements. The Company has 31.6 million shares issued and outstanding, and is listed on the TSX Venture Exchange