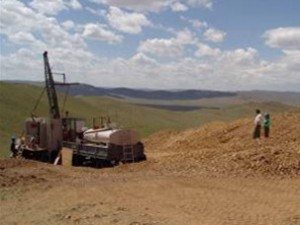 Erdene Resource Development Corp. (TSX:ERD) is pleased to announce it completed the $1 million initial tranche of the non-brokered private placement financing with Teck Resources Limited that was announced on April 11, 2013, at a price of $0.20 per share. The Company also announced that its board of directors has approved the adoption of an amendment to By-Law No. 1 of the Company, which requires advance notice to the Company in certain circumstances where nominations of persons for election as a director of the Company are made by shareholders.

Under the terms of the agreement announced in April, Teck agreed to subscribe for up to $3 million of Erdene shares by way of a non-brokered private placement. The initial tranche resulted in the issuance of five million shares priced at $0.20 per share for aggregate proceeds of $1 million. All shares issued are subject to a hold period of four months and one day from the date of issuance. There were no fees or commissions paid in connection with this financing.

Erdene will commit 85% of the proceeds from the private placement to exploration work, primarily on the Company’s Khuvyn Khar copper porphyry project and regional exploration in the Trans Altay Region of southwestern Mongolia.

Teck has the option to acquire additional shares of Erdene, priced at the then current market plus 10%, until it has invested $3 million or acquired through subscriptions 19.9% of the outstanding shares of Erdene, whichever occurs first. The balance of the private placement option is due within 30 days of Teck and Erdene being satisfied that clarification of recent proposed changes to the mining law and foreign investment laws of Mongolia have occurred and is subject to receipt of Toronto Stock Exchange approval. Specifically, the parties require assurance that Mongolian laws have been clarified to permit transfers of mineral licenses and confirmation that a majority interest in licenses can be transferred to a foreign controlled entity. Until that time, beginning six months after the closing of the Initial Tranche, Teck may subscribe to the balance of the private placement with a minimum of $500,000 on each anniversary date of the closing of the initial tranche.

The Company’s board of directors has approved the adoption of an amendment to By-Law No. 1 of the Corporation, which requires advance notice to the Company in circumstances where nominations of persons for election as a director of the Company are made by shareholders other than pursuant to: (i) a requisition of a meeting made pursuant to the provisions of the Canada Business Corporations Act (the “Act”); or (ii) a shareholder proposal made pursuant to the provisions of the Act (the “By-law Amendment”).

Among other things, the By-law Amendment fixes a deadline by which shareholders must submit a notice of director nominations to the Company prior to any annual or special meeting of shareholders where directors are to be elected and sets forth the information that a shareholder must include in the notice for it to be valid.

In the case of a special meeting of shareholders (which is not also an annual meeting), notice to the Company must be made not later than the close of business on the 15th day following the day on which the first public announcement of the date of the special meeting was made.

The Company believes that adopting the By-law Amendment is considered to be good corporate governance. The By-law Amendment facilitates an orderly and efficient annual or special meeting process and ensures that all shareholders receive adequate notice of director nominations with sufficient information with respect to all nominees. This allows the Company and its shareholders to evaluate the proposed nominees’ qualifications and suitability as directors, which further allows shareholders to cast an informed vote for the election of directors.

Erdene Resource Development Corp. is focussed on exploration and development in Asia, primarily Mongolia. Erdene has a very experienced technical and management team and has assembled a strong portfolio of gold, copper-gold, molybdenum-copper, and coal projects in Mongolia. These projects, and its in-country experience, provide the Company with a unique opportunity to participate in this period of unprecedented economic growth in Mongolia. This growth is fuelled by proximity to China and the discovery and development of a number of world-class mineral projects that are transforming the country into one of Asia’s natural resource capitals.