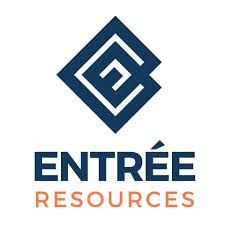 Entrée Resources Ltd. (TSX: ETG) (OTCQB: ERLFF) is pleased to announce that it has closed the non-brokered private placement announced on August 20, 2020.

Net proceeds from the Financing are expected to be used to update the National Instrument 43-101 Technical Report on the Company’s interest in the Entrée/Oyu Tolgoi joint venture property in Mongolia, and for general corporate purposes.

Stephen Scott, President and CEO commented, “We are very pleased that we had such high demand for the Entrée financing at this time of great uncertainty particularly as the overwhelming majority of subscribers were existing shareholders.  Capital is not always available to the junior mining sector and seizing the opportunity now has put Entrée in a very strong financial position as development of the Oyu Tolgoi underground project moves towards sustained production.”

Stephen Scott added, “We greatly appreciate the ongoing support of all of our shareholders and are particularly pleased that our three largest strategic shareholders participated in the financing at approximately existing proportional levels.”

The insiders’ participation is exempt from the formal valuation and shareholder approval requirements provided under Multilateral Instrument 61-101 – Protection of Minority Holders in Special Transactions. The exemption is based on the fact that the market value of the insiders’ participation or the consideration paid by such insiders does not exceed 25% of the market value of the Company.

The Company will be filing a material change report in connection with the transaction less than 21 days before the expected date of the closing of the transaction, and considers the shorter period to be reasonable given the nature of the transaction and the fact that all necessary approvals have been obtained.

Entrée Resources Ltd. is a Canadian mining company with a unique carried joint venture interest on a significant portion of one of the world’s largest copper-gold projects – the Oyu Tolgoi project in Mongolia.  Entrée has a 20% or 30% carried participating interest in the Entrée/Oyu Tolgoi JV Property, depending on the depth of mineralization. Sandstorm Gold, Rio Tinto and Turquoise Hill are major shareholders of Entrée, holding approximately 21%, 9% and 8% of the shares of the Company, respectively.