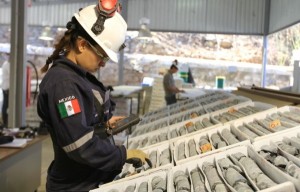 Late last year, Endeavour received the Mexican government approval for its Environmental Impact Assessment (MIA) for a 500 tonne per day project and initiated a Pre-Feasibility Study (PFS) to assess the potential to amend the MIA and build a 1,000 tonne per day (tpd), high grade, underground silver-gold mine at Terronera.

Endeavour commissioned Smith Foster & Associates Inc. to prepare a PEA in compliance with Canadian Securities Administrators NI 43-101 requirements in the course of completing a PFS due later this year. Smith Foster & Associates worked previously with Endeavour on the successful design and expansion of both the Bolanitos and El Cubo plants on time and budget. Their study is based on an NI 43-101 compliant resource estimate dated October 16th, 2014, however a higher cut-off grade was used. All dollar amounts are expressed in U.S. dollars unless otherwise specified.

The positive results of the PEA are as follows:

Bradford Cooke, CEO, stated: “We are pleased with the results of this preliminary economic assessment of the Terronera project. The study supports our expectations that Terronera can be a profitable silver-gold mine with ample potential for growth of the resources, expansion of the operations and improvement of the economics. Our Pre-Feasibility Study is advancing as planned, infill drilling of the Inferred resource is now underway and step-out drilling is scheduled in the second half of this year.”

The October 16, 2014 resource estimate, audited by P&E mining Consultants Inc. as a basis for the PEA, includes the following:

(1) CIM Definition Standards were followed for Mineral Resources
(2) Mineral Resources are estimated by conventional 3D block modelling based on wire-framing at a 100 g/t AgEq cut-off grade and inverse distance cubed grade interpolation.
(3) AgEq is calculated using the formula: AgEq= Ag g/t + (60*Au g/t).
(4) For the purpose of resource estimation, assays were capped at 1,750 g/t for Ag and 7.84 g/t for Au.
(5) Metal prices for the estimate are: US$18.00/oz Ag and US$1,260/ oz Au.
(6) A bulk density of 2.5 tonnes/m3 has been applied for volume to tonnes conversion.
(7) Mineral Resources are estimated from 1,648 m RL to 1,040 m RL, or from surface to approximately 614 m depth.
(8) Mineral Resources are classified as Indicated and Inferred based on drill hole location, interpreted geologic continuity and quality of data.
(9) A small amount of the resource has been mined at the northwest end of the TRV vein and this material has been removed from resources.
(10) Mineral resources which are not mineral reserves do not have demonstrated economic viability. The estimate of mineral resources may be materially affected by environmental, permitting, legal, title, taxation, socio-political, marketing, or other relevant issues.

The resources were estimated using a 100 gpt Ag Eq. cut-off grade assuming a process plant rate of 1,000 tpd with recoveries of 90% silver and 84% gold into a bulk sulfide flotation concentrate. Based on Endeavour’s all-in costs of acquisition and exploration to date of around $13 million, the discovery cost per oz has averaged less than $0.30 per oz silver equivalent to date.

P&E Mining Consultants Inc. have applied dilution and mine losses to the mineral resources captured within the PEA mine plan using a cutoff grade of 192 g/t silver equivalent and employing cut and fill mining methodology. The resource utilized in the PEA mine schedule and economic model totaled 3.46 million tonnes grading 213 g/t silver and 1.52 g/t gold at a silver equivalent grade of 304 g/t. The mining extraction was estimated at 95% and dilution was calculated using a 0.3m envelope on the margins of the designed stopes. Dilution percentage varies with the width of the zone and averages 12.7% at an average grade of 69 g/t silver-equivalent.

Endeavour has initiated a $3.4 million Pre-Feasibility program of infill drilling to upgrade and expand the resource, improve the economics of the project, and complete metallurgical testing, condemnation drilling, hydrological studies and geotechnical drilling. A PFS will subsequently be prepared for release later this year.

Endeavour successfully fast tracked the redevelopment of its three existing mines on a small scale for early cash-flow and through continued exploration, was able to make new discoveries, develop new mines and expand the operations to fuel 10 consecutive years of annual organic growth of silver production.

Endeavour management views Terronera as having similar potential for early cash-flow and future expansion. Exploration drilling will continue in 2015 and 2016 as the initial resource is open to the South-East. The Terronera vein has now been traced for over 5 kilometers, and it is just one of many prospective veins yet to be drilled on the Terronera property.

The initial plant design by Smith Foster & Associates is for 1,000 tpd, however, the crushing circuit and plant building have been over-sized so that the plant can be easily and economically expanded to 2,000 tpd once justified by increased resources.

Endeavour Silver is a mid-tier silver mining company focused on growing production, reserves and resources in Mexico. Since start-up in 2004, Endeavour has posted 10 consecutive years of accretive growth of its silver mining operations. Endeavour’s three silver-gold mines in Mexico combined with its strategic acquisition and exploration programs should facilitate Endeavour’s goal to become a premier senior silver producer.