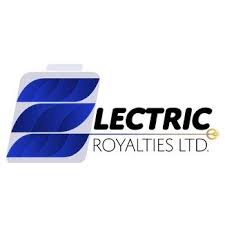 Electric Royalties Ltd. (TSX-V: ELEC) (OTCQB: ELECF) is pleased to announce the closing of its previously announced marketed public offering pursuant to which the Company issued 11,500,000 units of the Company  at a price of $0.30 per Unit for aggregate gross proceeds of $3,450,000, including 1,500,000 Units issued at the Offering Price for gross proceeds of $450,000 in connection with the full exercise of the over-allotment option granted to the Agents (as defined below) under the Offering. Each Unit is comprised of one common share in the capital of the Company and one Common Share purchase warrant. Each Warrant can be exercised for one Common Share at an exercise price of $0.45 per Warrant Share for a period of 36 months following the closing of the Offering, subject to adjustments in certain circumstances.

Canaccord Genuity Corp. acted as the lead agent and sole bookrunner of the Offering, with PI Financial Corp. and Research Capital Corporation also acting as agents.

The Offering was conducted pursuant to a prospectus supplement dated May 5, 2022 to the Company’s short form base shelf prospectus dated February 28, 2022 filed with the securities commissions and other similar regulatory authorities in each of the provinces of Canada, except Quebec. The Offering remains subject to final acceptance by the TSX Venture Exchange.

The Company intends to use the net proceeds from the Offering for funding potential future acquisitions of royalties and other interests, targeting commodities that enable the clean energy transition, such as lithium, vanadium, manganese, tin, graphite, cobalt, nickel, zinc and copper, as well as for working capital and general corporate purposes, as further described in the Prospectus Supplement.

In connection with the Offering, the Agents received an aggregate cash commission equal to 7% of the gross proceeds of the Offering. The Agents also received, as additional compensation, non-transferable compensation warrants exercisable to purchase up to 805,000 Common Shares each at the Offering Price, subject to adjustments in certain circumstances, for a period of 24 months following the closing of the Offering.

This press release does not constitute an offer to sell or the solicitation of an offer to buy Units, nor will there be any sale of the Units in any jurisdiction in which such offer, solicitation or sale would be unlawful prior to the registration or qualification under securities laws of any such jurisdiction.

Electric Royalties is a royalty company established to take advantage of the demand for a wide range of commodities (lithium, vanadium, manganese, tin, graphite, cobalt, nickel, zinc and copper) that will benefit from the drive toward electrification of a variety of consumer products: cars, rechargeable batteries, large scale energy storage, renewable energy generation and other applications.

Electric vehicle sales, battery production capacity and renewable energy generation are slated to increase significantly over the next several years and with it, the demand for these targeted commodities. This creates a unique opportunity to invest in and acquire royalties over the mines and projects that will supply the materials needed to fuel the electric revolution.

Electric Royalties has a growing portfolio of 18 royalties, including one royalty that currently generates revenue. The Company is focused predominantly on acquiring royalties on advanced stage and operating projects to build a diversified portfolio located in jurisdictions with low geopolitical risk, which offers investors exposure to the clean energy transition via the underlying commodities required to rebuild the global infrastructure over the next several decades towards a decarbonized global economy.