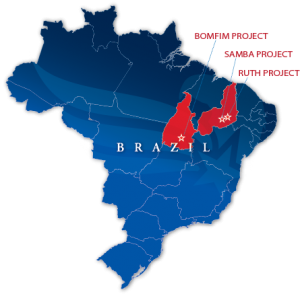 Eagle Star Minerals Corp., (TSX VENTURE:EGE) (PINKSHEETS:ELGSF) (FRANKFURT:E6R) is very pleased to announce it has received $1,680,000 from the exercise of 8,400,000 share purchase warrants exercisable at 20 cents per share. The warrants were part of an oversubscribed non-brokered private placement in the amount of $925,000 at a price of 10 cents per unit completed August 31, 2012. The Company would like to thank its shareholders for their continued support.

DRILLING: Eagle Star plans to continue moving forward with its drill program aimed towards quantifying high-grade outcropping phosphorite found on now nine separate targets distributed along the phosphate belt within the Bomfim claims. Drill data received from this ongoing program will be interpreted by Coffey Mining Limited as it becomes available for the purpose of incorporating it into updates of the NI 43-101 report now under preparation. Once this work is done, the Company intends to start drilling lower grade zones within the same nine targets to start quantifying the extent of this other type of mineralization.

FLOTATION TESTING: The Company intends to continue flotation tests on representative ore types of different grades from both The Bomfim and Ruth projects. Successful flotation results will allow the Company to produce fertilizers not only from the high-grade phosphate mineralization it is currently in the process of proving, but also from lower grade phosphate mineralization it believes to have in large quantities on both the Bomfim and Ruth projects.

THERMAL PHOSPHATE TESTING: Internal research conducted by the Company has shown the benefits of producing Thermal Phosphate as a final product to sell to NPK manufactures in Brazil. Due to its very low solubility in water, Thermal Phosphate is an ideal fertilizer for crops grown in tropical climates that are prone to heavy rainfall, ranking it in the top of its class in terms of agronomic efficiency. It is for this reason that Thermal Phosphate sells at a price premium to other phosphate based fertilizers within Brazil. Eagle Star intends to continue performing extensive thermal tests on high-grade phosphorite and commence similar tests on lower grade phosphate that has been upgraded through the flotation process in order to prove the feasibility of full cycle production from lower grade phosphate to high-grade Thermal Phosphate.

PRODUCTION: Proceeds of this latest raise are also planned to fund the down payment required to secure acquisition of certain equipment essential for construction of a processing facility as part of the Company’s plan to move into production of direct application natural fertilizer by early 2014.

Eagle Star Minerals Corp is a publicly listed company focused on the acquisition, exploration and development of agro-mineral properties in Brazil. Over the past two years, Eagle Star Minerals has strategically grown its presence in Brazil and continues to focus on maximizing shareholder value by acquiring assets located in geological areas known for proven phosphate mineralization, coupled with good logistics in close proximity to agriculture.