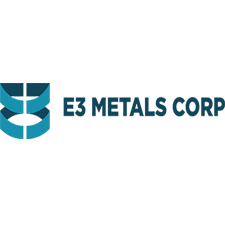 E3 METALS CORP. (TSX-V: ETMC) (FSE: OU7A) (OTC: EEMMF) is pleased to announce the successful closing of the second tranche of its non-brokered private placement financing announced on November 20, 2019.  Under the Offering, the Company has now issued a total of 5,272,400 units of the Company including 2,267,900 units issued on the first tranche which closed December 18 2019, at a price of $0.40 per Unit for a total gross proceeds of $2,108,960. Each Unit is comprised of one common share and one-half of one common share purchase warrant. Each Warrant entitles the holder to acquire one additional common share at an exercise price of $0.60 for a period of 30 months following the date of issuance. E3 Metals now has 30,477,400 common shares issued and outstanding. Securities under this Tranche 2 are subject to a four month hold period from their date of issue. Commissions comprised of $18,000 cash and 45,000 broker warrants were issued in connection with the Tranche 2 closing. Broker warrants issued carry the same terms as the Warrants.

Further to the Company’s press release of November 20, 2019, E3 Metals wishes to advise that it will not invoke the acceleration provisions of the Warrants under either the Tranche 1 or Tranche 2 closing of the Offering.

The Company plans to deploy the funds raised to continue the development of the reservoir and advance the brine production plan. The Company is actively de-risking its project by making large strides in commercial development in Alberta. This work, combined with the Company’s proprietary Direct Lithium Extraction Technology in collaboration with Livent under the Joint Development Agreement, will fast track the Company’s development. The Company will keep the market informed as the project development work progresses, and the economic viability of the overall project is established.

“Direct lithium extraction technologies are attracting increased investor attention as a sustainable, scalable and economic process to contribute to the anticipated massive increase in lithium is being forecasted by 2030. Since signing our Joint Development Agreement with Livent Corp. (the lithium industry’s 5th largest producer and technological leader), last September, E3 Metals has been progressing rapidly toward proving out its proprietary technology and moving forward with constructing a pilot plant targeted to commence operating in 2021,” commented Chris Doornbos, E3 Metals’ CEO.

E3 Metals is a lithium development company with 6.7 million tonnes lithium carbonate equivalent inferred mineral resources1 in Alberta.  E3 Metals is currently advancing its proprietary Ion Exchange Direct Lithium Extraction process in partnership with Livent Corporation under a Joint Development Agreement.  Livent is the world’s largest pure-play lithium producer, well-known for being one of the lowest cost producers of lithium carbonate.  With facilities across the globe, Livent holds technical expertise in the extraction and production of various lithium products. E3 Metals also continues to work with partners at the University of Alberta and at GreenCentre Canada.

Through the successful scale up of its DLE process towards commercialization, E3 Metals plans to quickly move towards the production of high purity, battery grade, lithium products.  With a significant lithium resource and innovative technology solutions, E3 Metals has the potential to deliver lithium to market from one of the best jurisdictions in the world.  The development of this lithium resource through brine production is a well-understood venture in Alberta, where this brine is currently being produced to surface through an extensive existing oil and gas infrastructure and development.