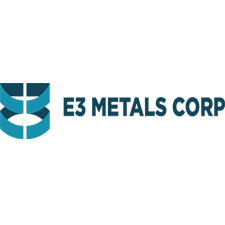 E3 METALS CORP. (TSX-V: ETMC) (FSE: OU7A) (OTC: EEMMF) is pleased to announce the successful closing of its non-brokered private placement financing announced on June 12, 2018.  Under the Offering, the Company has issued 3,232,500 units of the Company (the “Units“) at a price of $0.40 per Unit for gross proceeds of $1,293,000.  Each Unit comprises one common share and one common share purchase warrant.  Each Warrant entitles the holder to acquire one Share with an exercise price of $0.40 for a period of 4 months following the date of issuance, and an exercise price of $0.60 thereafter. All Warrants expire on August 20, 2019.

In accordance with applicable securities laws and the policies of the TSX Venture Exchange the Company paid an aggregate $20,325 in cash commission, and issued an aggregate 67,750 broker warrants on the same terms as the Warrants to certain brokers in connection with the Offering.

All securities issued are subject to a hold period under applicable securities laws in Canada expiring on December 21, 2018.

E3 Metals plans on deploying the raised capital towards progression of its proprietary lithium extraction technology and corporate overhead.

The financing included a purchase of 1,000,000 Units for the sum of $400,000 by Comstock Metals Ltd. Through the exercise of warrants, the investment includes the opportunity for Comstock to purchase an additional 1,000,000 Shares over the next 12 months. As announced on August 8th 2018, E3 Metals entered in a joint venture agreement with Comstock to acquire and develop prospective new mineral assets in the battery metal space. The agreement is expected to create additional opportunities for the Company to deploy its lithium extraction technology. As part of the agreement, Comstock’s President and CEO Steven H. Goldman will join E3 Metals as an advisor.

In addition, the Company will grant stock options on August 21, 2018, to an officer of the Company for the purchase of up to 20,000 Shares of the Company at an exercise price of $0.40 per Share for a period of 3 years. The options will vest in 25% tranches quarterly, beginning 3 months from grant, in accordance with the policies of the TSXV. The stock option issuance remains subject to TSXV approval.

The Company also announces that it intends to reprice certain stock options, which at the time of grant authorized the purchase of:

In addition to his role as the CEO, President and member of the board of directors of Comstock, Steven H. Goldman is a member of the board of directors and audit committee of Select Sands Corp. (TSX.V: SNS.V) which owns and operates silica sand operations in Arkansas, U.S.A.  Select Sands is currently the largest shareholder in Comstock Metals Ltd.  Steven has had extensive experience as a board member in various public and private companies.  He graduated from Carleton University in 1976 (B.A., President’s Medal) and from Queen’s University in 1980 (J.D.). He was called to the Bar in Ontario in 1982 and is the founding partner in the Toronto law firm of Goldman Hine LLP. He has been listed in The Best Lawyers in Canada. Steven is currently listed in Lexpert® as a leading legal practitioner in Toronto in the area of franchise litigation. In 2008 and 2009, Steven acted as the President and CEO of both the Speedy Auto Service and Minute Muffler franchise systems, having successfully restructured both companies after they had been purchased from court appointed receivers in Ontario and Alberta.

Comstock Metals Ltd. is a publicly listed exploration company (TSX.V: symbol: CSL.V) with several resource projects located in North America. Presently evaluating opportunities in the battery metal space Comstock recently secured and is currently exploring the Rawhide Cobalt-Silver Project in Ontario. The Rawhide project is in addition to its 2 advanced gold projects: Preview Project in Saskatchewan and QV Project in the Yukon.

E3 Metals is a Petro-Lithium company rapidly advancing the development of direct recovery lithium brine projects in Alberta. E3 Metals holds lithium resources at 6.7 Mt LCE (inferred)1. The Company has a compelling competitive advantage by virtue of having access to extensive infrastructure built by the Oil and Gas industry in Alberta. This has provided E3 Metals with low finding costs, as the Company has been able to sample existing wells to define its resource. This infrastructure may also provide wells and pipelines for a future lithium production operation, potentially reducing the Company’s future capital requirements. The Company’s immediate goal is to scale-up its proprietary chemical concentration process, which it views as a key driver to enable commercial production of its Alberta lithium brine resources.