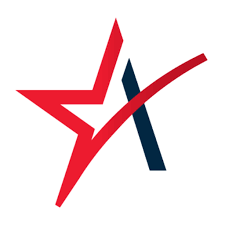 Astra Exploration Inc. (TSX-V: ASTR) is pleased to provide results from the remaining 18 of 30 completed drill holes at the Pampa Paciencia gold-silver project in northern Chile.

Astra’s CEO, Brian Miller commented: “Astra’s maiden drill program has accomplished two important goals at Pampa Paciencia. First, we have identified two high-grade shoots within the Paciencia Vein system, both of which remain open along strike and at depth. Second, we have made blind vein discoveries which demonstrates the effectiveness of the Company’s geologic model and exploration methods. Early indications suggest that we could be in the upper levels of the gold mineralization with significant room to grow beneath these shallow intercepts. Astra will next complete a Phase 2 program to expand these open interstections and explore for new vein structures.”

Pampa Paciencia is a 3,840 hectare road-access low-sulphidation epithermal gold-silver project located within an active mining district less than 15 kilometers from two major mines (Sierra Gorda and Spence) and five kilometers from the Faride LSE mine (Figure 5).

Astra has completed property wide mapping and sampling, geophysical surveys, and localized trenching and in doing so, has defined a vein boulder field over approximately 75% of the project area. The veins do not outcrop as the majority of the project area is covered by a thin layer of gravels and caliche but the vein float can be used to identify areas of high prospectivity.

Most drilling focused on the 1.4 km long Paciencia Vein system located in the North Zone, which is comprised of Paciencia Oeste, Paciencia, and Paciencia Este vein segments (Figures 3 & 4). The Company previously reported results for 11 of 29 drill holes (May 2nd news release) which were from the Paciencia Vein, and the holes reported herein are for the remaining 18 drill holes as follows:

Drill holes at Pacienca Oeste and Paceincia Este intercepted thick (10 – 20 metres true thickness) vein structures which occurred in shallow drill holes approximately 15 to 25 metres below surface, with one hole reaching 75 metres below surface in Paciencia Oeste. Detail interpretation shows one to two parallel branches in both veins, with higher grades located in the more vertical portion of the Paciencia Oeste vein, as was also detected in Paciencia vein segment (Figure 2 and 3D Movie).

The three vein segments along the Paciencia Vein System are separated by ENE-striking faults that were interpreted with geophysical magnetics and confirmed with trenching. Plan map (Figure 4) and an integrated longitudinal section (Figure 1) clearly show this continuous but segmented nature of the Paciencia Vein System, and the presence of two high grade mineralized shoots with similar behaviour (45° SE plunge) which are both open along strike and at depth.

Geochemical results (Table 1) show the variation in the  of Ag:Au ratios in the Paciencia Vein System, with an average Ag to Au ratio of 47 in the higher grade portions of the Paciencia Oeste vein, that decrease to 16 in Paciencia vein, and to 4 in Paciencia Este vein. Preliminary results for the two blind geophysical vein discoveries returned Ag:Au ratios of 61 and 2 in Geophysical targets 2 and 1, respectively (Figure 4). Company geologists believe this further demonstrates the potential for finding Au-rich veining in the eastern portion of this vein network and/or at depth.

The remaining three holes in the Central Zone confirmed thin (up to 2m thick) chalcedonic vein and veinlet structures hosted in the Paleocene andesites which overlay the Cretaceous granitoids. Drill holes did not reach sufficient depth to intersect the more competent granitoid rock where thicker veins develop as indicated by field mapping. These results indicate a shallow system elevation and deeper drilling is required to properly test the Central Zone targets.

2,981 metres of RC drilling were completed in thirty holes between February and March 2022 at Pampa Paciencia. These mostly concentrated on defining the strike and depth continuity of the Paciencia Vein System in the North Zone with three holes were drilled to test veins at depth in the Central Zone and two holes tested geophysical targets in the North Zone (Figure 1). A total of 1,233 samples, including blanks, duplicates and standards, were sampled and sent to ALS lab in Santiago, Chile.

The drill program was completed for ~C$650,000 of all-in costs highlighting the ability to complete cost-effective exploration at low elevations in Chile.

Eleven historical holes had been drilled previously on the property and Astra’s geologists continued with the numbering system, so holes PPRC-22-12 to PPRC-22-41 are the thirty holes completed by Astra Exploration.

Drill samples were sampled, bagged, and tagged by Astra´s geologists and then delivered to the ALS sample preparation laboratory in Santiago. Samples were prepared with PREP 31B code, and then analyzed with fire assay for gold (Au-AA24), acid digestion for silver (Ag-AA62), and multi elements by ICP (ME-ICP61). Gold overlimits were analysed by gravity method (Au-GRA22).

The technical data and information as disclosed in this report has been reviewed and approved by Darcy Marud.  Mr. Marud is a Practicing Member of the Association of Professional Geoscientists of Ontario and is a qualified person as defined under the terms of National Instrument 43-101 – Standards of Disclosure for Mineral Projects.

Astra Exploration Inc. is an exploration company based out of Vancouver, BC. Astra is engaged in the acquisition, exploration and development of epithermal gold-silver properties in Chile and is building a portfolio of high-quality projects. Astra’s current focus is the development of the Pampa Paciencia Project. 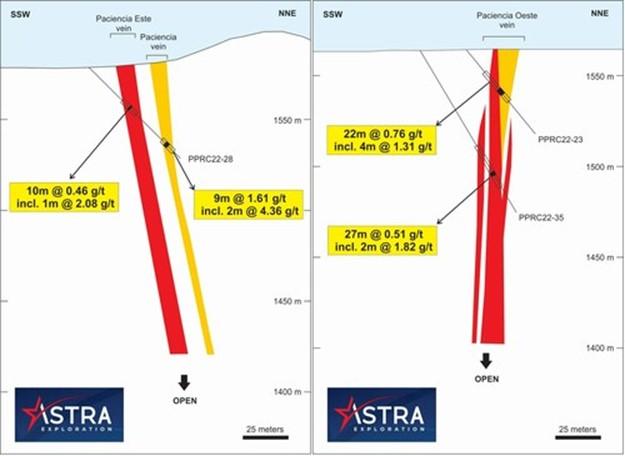 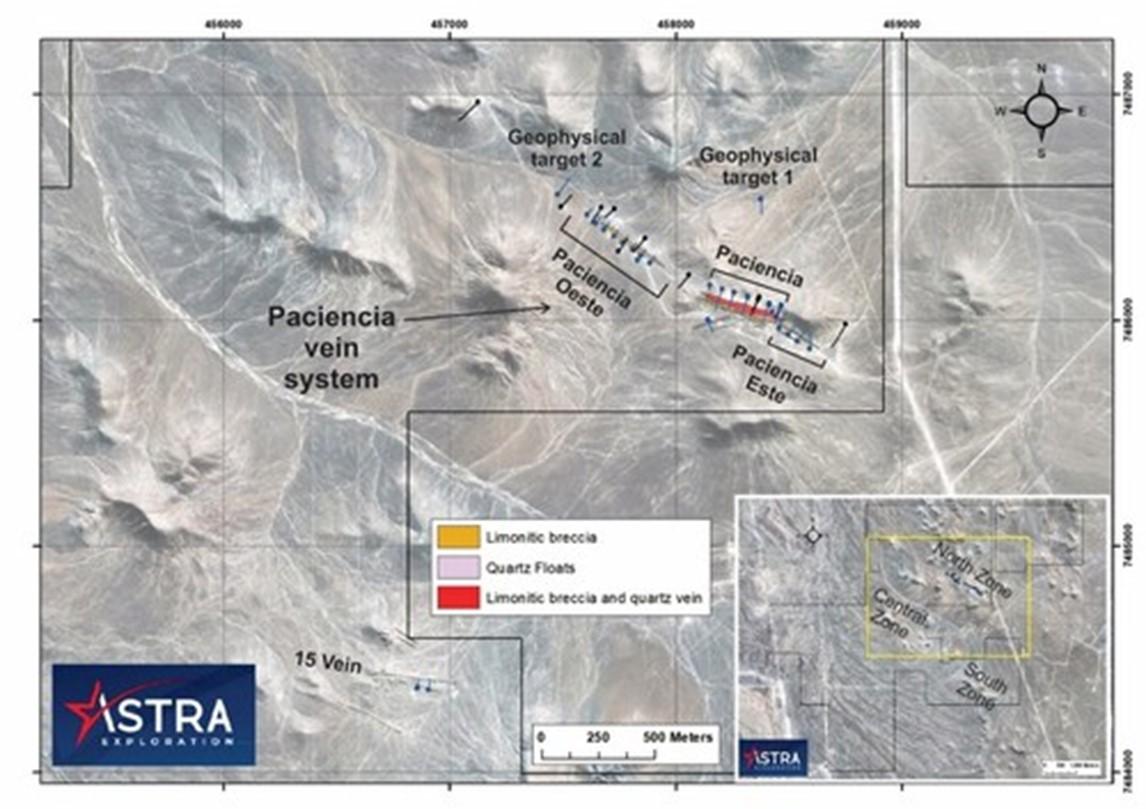 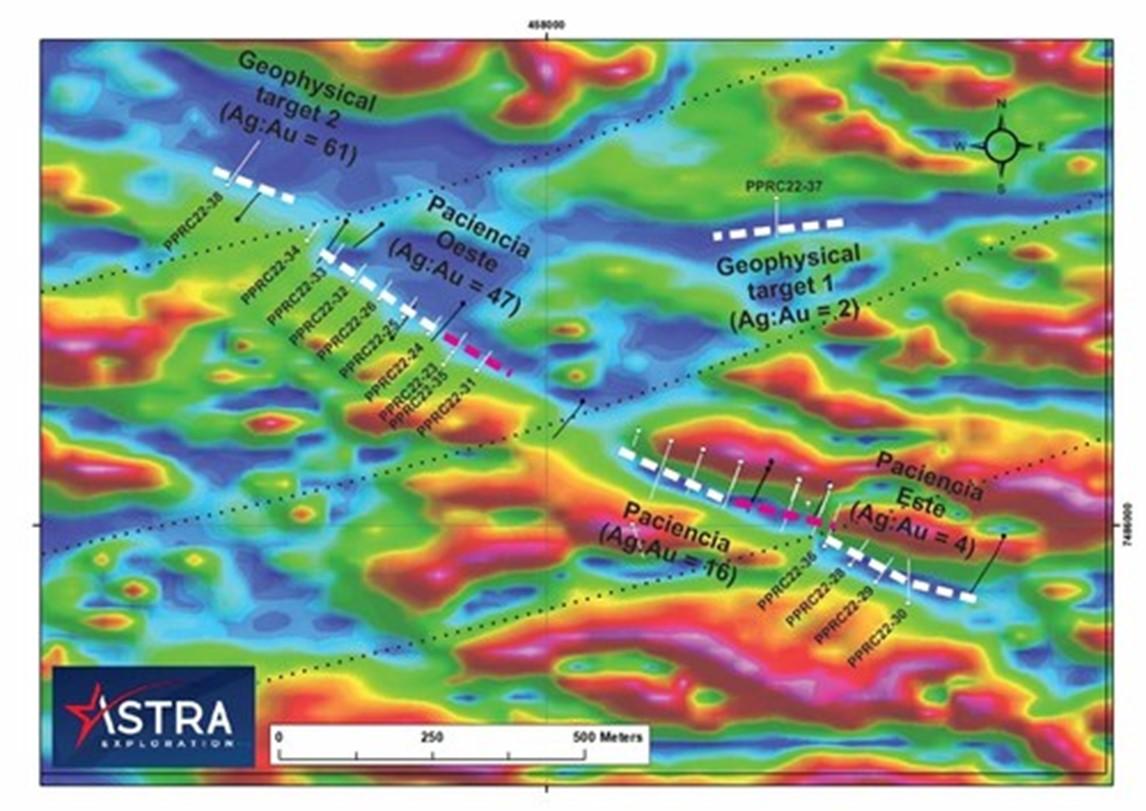 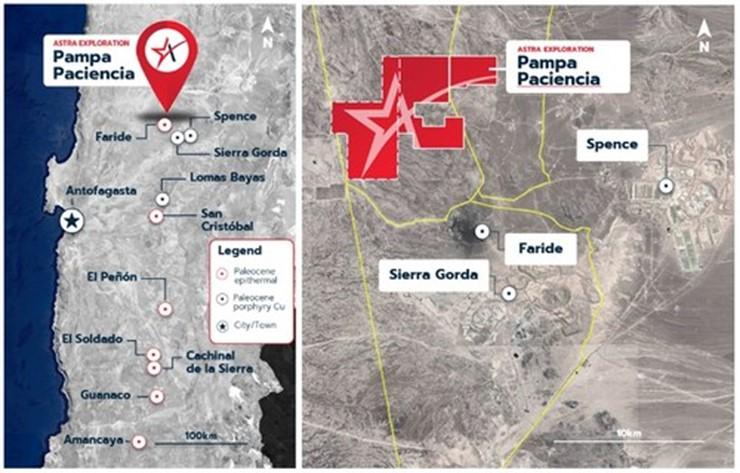