Mako Mining Corp. (TSX-V: MKO) (OTCQX: MAKOF) is pleased to report positive drill results from infill and expansion drilling at the Arras Zone within its San Albino gold mine in northern Nicaragua.

The objective of the drill program at the Arras Zone is to increase the level of confidence in the currently defined resources and to define additional shallow, high-grade resources.

The Company is following a systematic approach of drilling shallow holes by spacing them approximately every 10 meters along strike and every 10-15 m down dip.  During 2021, over 7,900 m have been drilled at the Arras Zone in 150 diamond drill holes.

The shallow portion of the Arras Zone is in the San Albino Central Pit approximately 170 m to the east of the San Albino West Pit, which is currently being mined by the Company.  Mineral resources in the Arras Zone account for only 10.9% of the Measured and Indicated and 26.5% of the Inferred mineral resources estimated by Mine Development Associates, a division of RESPEC, out of Reno, Nevada.  A technical report for the updated mineral resource estimate was filed in accordance with National Instrument 43-101, Standards of Disclosure for Mineral Projects under the Company’s SEDAR profile at www.sedar.com and available on the Company’s website at www.makominingcorp.com (see press release dated October 19, 2020).

Mining at the San Albino Central Pit is expected to begin in Q4 of 2021.

Akiba Leisman, Chief Executive Officer of Mako states that, “we are continuing to systematically drill the shallow portion of the Arras Zone in the Central Pit, which we plan to begin mining next quarter in conjunction with ongoing mining of the San Albino Zone in the West Pit.  Although the Arras Zone is more complex than the nearby San Albino Zone, we are confident that the selective open pit mining techniques that are proving successful in mining the San Albino Zone should be equally successful in mining the Arras Zone.  Furthermore, the high-grade intercepts outside the current MDA Resource, including 18.56 g/t gold over 5.1 meters estimated true width and 70.59 g/t gold over 1.1 meters estimated true width are likely to have a positive impact on the mineralized material available to mine in the Arras Zone.  Lastly, regional prospecting continues to identify targets many kilometers away from San Albino, including at Aguafria where a relatively uncommon silver rich zone was sampled with grades up to 2,989 g/t silver.  Aguafria lies approximately 3.2 kilometers along strike from another well-known silver prospect and has become a high-priority target for us to drill next year.”

The Company intends to increase both resource expansion/delineation and regional target drilling over the next twelve months and has contracted Continental Drilling S.A. for an additional three rigs and 30,000 m of drilling, bringing the total to five rigs and 60,000 m.  Drilling support facilities are under construction to support the increased activity.

Specific Comments on Significant Results Reported in this Press Release are as Follows:

Today’s infill-drilling results continue to demonstrate structural continuity and the potential for resource expansion from the MDA Resource of the shallow portion of the Arras Zone located within the Central Pit.  This shallow portion of the Arras Zone has now been measured over a strike length of approximately 540 m and approximately 200 m down dip to a vertical extent of 120 m (see attached drill hole plan map).  Continuity of individual areas along strike and down dip varies between 30-50 m.  The Arras Zone remains open down dip and has been successfully tested for underground mining potential to over 700 m.

Drill hole AR21-413 intersected 27.99 g/t Au and 36.9 g/t Ag over 1.3 m (ETW) at 72.7 m below surface.  This drill hole is collared approximately 25 m outside of the current pit limit defined by the MDA Resource.  Additional drilling is planned to determine the limits of this new zone.

The reconnaissance exploration program completed by Mako to date covers the entire landholding, which comprises numerous historical workings that exploited shallow dipping, high-grade gold veins.  The Company is conducting follow-up prospecting in multiple areas to identify potential extensions of veins defined to date.  Recently, the Company was focused on the northern part of the San Albino-Murra concession and discovered several showings (see attached map), very similar in the structural settings and style of mineralization currently being mined at San Albino.

The Aguafria prospect is located approximately 3.2 km northeast from Mina Plata on the contiguous La Segoviana Concession.  Mina Plata is a well-known historical underground working, where silver-rich veins were mined in the 1920’s.  The recent sampling of historical dumps in the vicinity of the Mina Plata prospect yielded 108 g/t Ag and 3.89 g/t Au and 95.4 g/t Ag and 4.55 g/t Au.

These high-grade silver assays at La Segoviana and the northern block of the San Albino-Murra concession provide compelling evidence that the silver mineralization at Aguafria and Mina Plata could be part of a larger regional silver-rich system or systems.  Additional exploration is required to reveal the full exploration potential of this area.

One of the first documented gold discoveries in Central America was in the Arras Zone where gold was mined by the Spanish.  According to the “Report on San Albino Gold Mines Situated in Nueva Segovia, Nicaragua” by Rodgers Peale, San Francisco, California dated January 12, 1948 “the vein was flat and dipped with the surface of the hill so that it was mined as an open pit by the Spaniards.”  It is believed that the gold from the Arras Zone was transported to Ciudad Antigua approximately 21 km to the southwest.  Ciudad Antigua was one of the few inland cities raided by pirates and in 1654 was attacked by one of the most infamous English pirates of the time, the notorious Henry Morgan.

A review of a 1948 report by Rodgers Peale indicates that the Arras Zone was one of the last areas mined at San Albino.  The area is described as last being mined in 1943 and with several shoots extending 30 m along strike and 20 m down dip.  Overall, the Arras Zone is described as having a strike extent of 200 m, a dip of 60 m and an average width of 1.6 m.  Subvertical and low angle faults are described to have offset the veins.

Drill core was continuously sampled from inception to termination of the entire drill hole.  Sample intervals were typically one meter.  Drill core diameter was HQ (6.35 centimeters).  Geologic and geotechnical data was captured into a digital database, core was photographed, then one-half split of the core was collected for analysis and one-half was retained in the core library.  Trench and surface channel samples followed a similar procedure as drill core sampling.  Continuous samples were collected using a diamond saw or rock hammer and chisel.  Care was taken to ensure a consistent channel width of 6 cm wide and 5 cm depth.  Individual channel samples range from 0.4 meters to 1.0 meters in length. Both drill core and channel samples were kept in a secured logging and storage facility until such time that they were delivered to the Managua facilities of Bureau Veritas and pulps were sent to the Bureau Veritas laboratory in Vancouver for analysis.  Gold was analyzed by standard fire assay fusion, 30-gram aliquot, AAS finish.  Samples returning over 10.0 g/t gold are analyzed utilizing standard Fire Assay-Gravimetric method.  In order to test for the potential presence of coarse gold in a certain sample, the Company has used 500-gram metallic screened gold assays for analyzing samples from mineralized veins and samples immediately above and below drilled veins.  This method, which analyzes a larger sample, can be more precise in high-grade vein systems containing coarse gold. All reported drill results in this press release using the metallic screening method are indicated.  The Company follows industry standards in its QA&QC procedures. Control samples consisting of duplicates, standards and blanks were inserted into the sample stream at a ratio of 1 control sample per every 10 samples.  Analytical results of control samples confirmed reliability of the assay data. 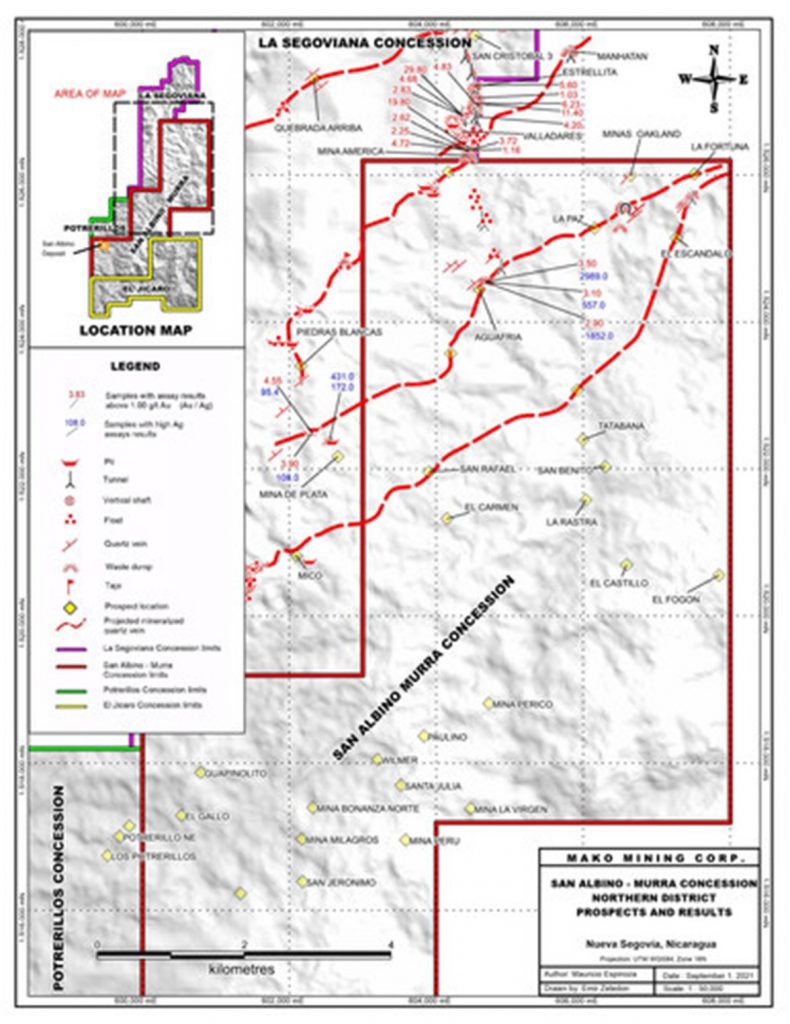 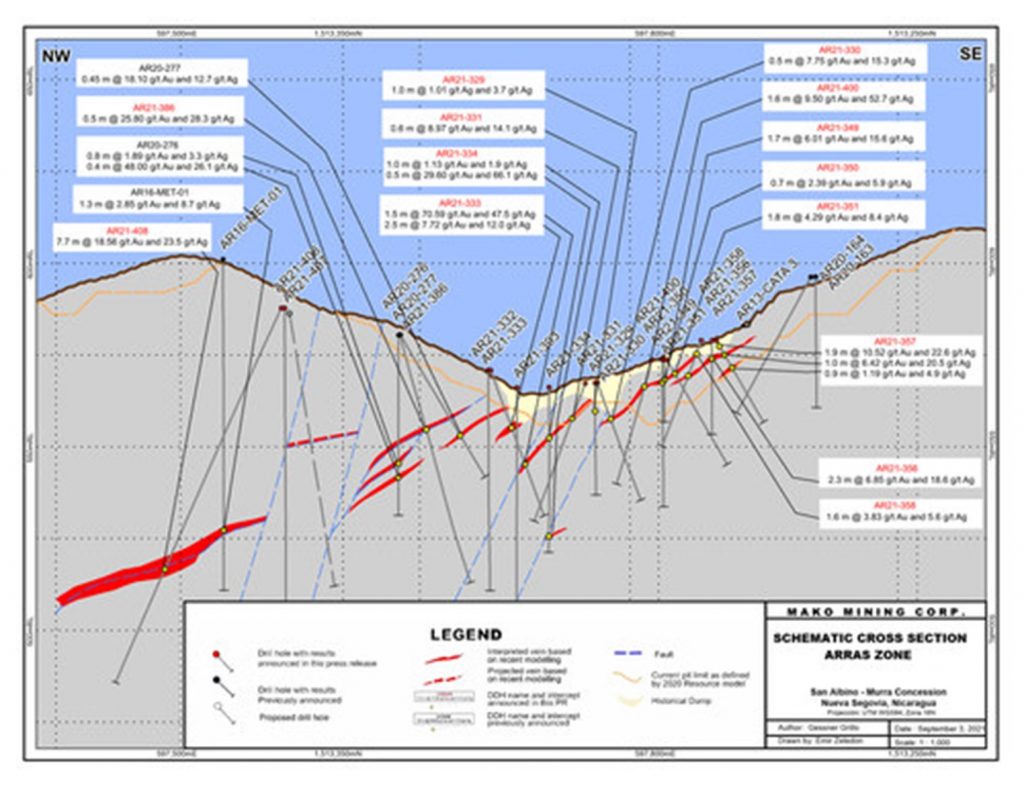