Drilling at Spargos Reward Extends High Grade Gold Plunging Shoot to Over 300 metres Down-Plunge With Intersection of 6.1 g/t Over 14 metres as Resource Definition Drilling Completed Ahead of Resource Update

Karora Resources Inc. (TSX: KRR) is pleased to announce completion of its 12,000 metre drill program at Spargos Reward Gold Project. The drilling has delineated high grade gold mineralization within approximately 100 metres of surface along an approximate 400 metre strike length which will support the commencement of mining operations at Spargos around mid-year.

Paul Andre Huet, Chairman & CEO, commented: “I am extremely pleased with the outcome of our maiden drilling program at Spargos. In mid-November, we announced some of the best drill results in Karora’s history and today we have confirmed a major extension of the high grade plunging shoot thesis we originally outlined with our first pass results. This is a new shoot, not previously recognized by previous owners and highlights both near surface high grade mineralization as well as the underground opportunity that exists at Spargos.

Now that our extended Resource Definition drilling program is complete, I am looking forward to our upcoming Mineral Resource estimate and the initiation of mining activities for Spargos in the second quarter. Spargos is expected to provide high grade gold feed for the Higginsville plant in the second half of 2021, contributing to our expectation that gold grades will increase as we progress through the year.”

The Infill RC drill program designed to upgrade the Historical Mineral Resource and support resource modelling for open pit evaluation has been completed. Drilling totalled 107 holes for 9,590 metres. In addition, two geotechnical diamond holes were completed to support open pit mine design assumptions. Drilling targeted mineralization over 400 metres of strike to a depth of approximating 100 metres below surface – in line with expectations for open-pit mine depths. All assay results from this drilling have now been received, noting that turnaround on assay results was delayed due to backlogs at laboratories in the region reflecting a rapid increase in exploration and new mining projects in the region and COVID-19 related issues. Assay highlights from this program are listed below, including some previously released drill intersections.

Highlighted gold intersections from the drilling3,4 are listed in order below:

An updated Spargos gold Mineral Resource is planned for release in the second quarter of 2021 and remains in line with the commencement of mining at Spargos.

Four diamond holes totalling 1,102 metres were drilled to test the interpretation and extent of high grade gold mineralization controlled by north plunging shoots within the Spargos Reward mineralized system. These shoots were first identified from interpreting historical drill results and underground mine data. Current interpretation is of four parallel high-grade shoots (Figure 1), with the Stage 1 diamond drilling targeted to extend and/or test the interpreted position of three shoots.

Results to date were received for SPDD003 which targeted the down-plunge extension of the very high gold grades previously intersected at the southern end of the deposit from the initial infill drill holes (Karora news release, November 18, 2020). The new results confirm the current interpretation which shows high grade gold mineralization extending over a down-plunge distance of over 300 metres. The down-plunge extension of this shoot remains open at depth and highlights the underground growth opportunity remaining to be tested. Results for the remaining three diamond holes are pending.

The Spargos Reward project tenements cover 33 square kilometres, located in the Eastern Goldfields of Western Australia, just 65 kilometres north of Karora’s Higginsville mill by road. The project contains an existing historical (JORC (2012) gold Mineral Resource Estimate6 of 112,000 oz (785,800 tonnes @ 4.4 g/t) indicated resource and 19,000 oz (151,000 tonnes @ 4.0 g/t) inferred resource, There are also a number of historic workings within the project, most notable of which is the historic Spargos Reward Gold Mine which produced 105,397 tonnes at an average grade of 8.56 g/t Au in the 1930s and 1940s, with limited gold extraction since that time. Karora acquired the Spargos Reward project in August 2020 (see Karora news release dated August 7, 2020)

The Spargos gold mineralized system is positioned on the contact between meta-greywackes to the east and strongly altered sodic felsic volcaniclastics to the west along a major north trending shear zone which dips steeply to the east. Gold mineralization is hosted in a number of positions with the bulk of the identified mineralization occurring as disseminations and stringer zones of quartz-biotite-amphibole-pyrite-arsenopyrite alteration. The deposit is characterized by the absence of quartz veining.

The gold mineralized zones can be broken down into two key zones – Main Lode and a second West Zone. A review of the historical mine mapping and data indicate high grade mineralization is associated with shallow, north plunging shoots controlled by drag folds recognized along the meta-greywackes and western meta-volcaniclastics contact. The interpreted down-plunge position of high grade mineralization is virtually untested by drilling and represents significant exploration potential to grow the existing historical mineral resource.

A revised gold Mineral Resource statement is expected in the second quarter of 2021 which remains in line with the Corporation’s targeted date for commencement of mining at Spargos. Initial open pit design, flora and fauna surveys, waste characterization and infrastructure location have all been completed and will form part of the final mine plan submitted for mining approval with the appropriate authorities.

Where problems have been identified in QA/QC checks, Karora personnel and the Bureau Veritas laboratory staff have actively pursued and corrected the issues as standard procedure.

Karora is focused on growing gold production and reducing costs at its integrated Beta Hunt Gold Mine and Higginsville Gold Operations (“HGO”) in Western Australia. The Higginsville treatment facility is a low-cost 1.4 Mtpa processing plant which is fed at capacity from Karora’s underground Beta Hunt mine and open pit Higginsville mine. At Beta Hunt, a robust gold Mineral Resource and Reserve is hosted in multiple gold shears, with gold intersections along a 4 km strike length remaining open in multiple directions. HGO has a substantial gold Mineral Resource and Reserve and prospective land package totaling approximately 1,900 square kilometers. The Company also owns the high grade Spargos Reward project which is anticipated to begin mining in 2021. Karora has a strong Board and management team focused on delivering shareholder value. Karora’s common shares trade on the TSX. Karora shares also trade on the OTCQX market. 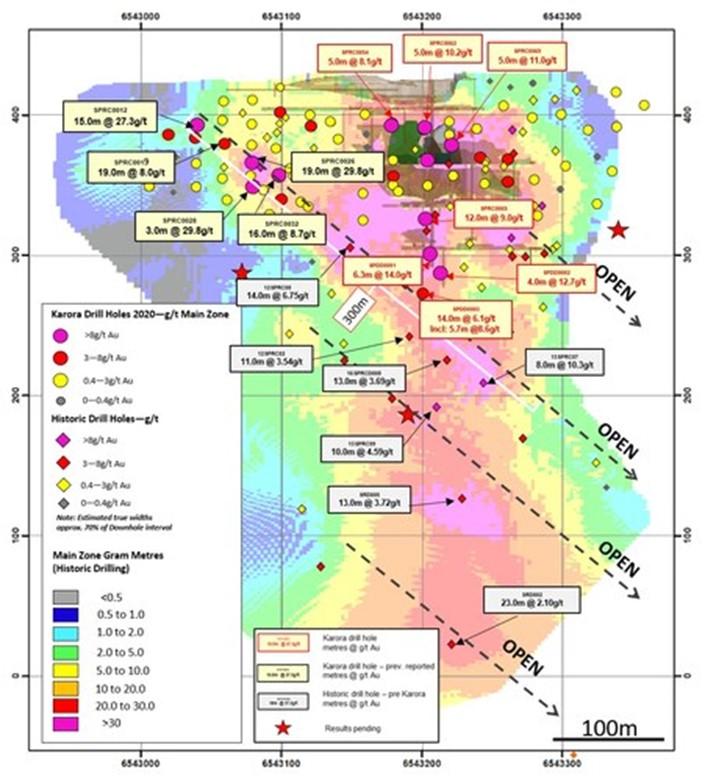