Drilling at Las Conchitas Hits Multiple Intercepts at the Bayacun Zone, Highlighted by 40.17 g/t Gold Over 1.95 Meters (True Width) at 2.5 Meters from Surface

The goal of the 2020 drill program at Las Conchitas is to focus on the most promising zones of near surface, shallow dipping, high-grade gold mineralization to delineate a maiden resource estimate.  Since 2019, the Company has completed 111 shallow diamond drill holes totaling 9,038 meters within the Bayacun Zone, which is among the most promising zones within the Las Conchitas area.  A total of 19,861 m within 248 holes have been drilled at Las Conchitas since the start of the 2019-20 drilling campaign.

This press release includes results for 29 holes (see table and attached map), which were designed to further test the strike and dip extension and to improve the understanding of structural controls at the Bayacun Zone.

Akiba Leisman, Chief Executive Officer of Mako states that, “the ongoing drilling campaign at Las Conchitas continues to yield impressive results, despite only having one drill rig turning.  To date, 220 m of strike and 230 m of dip of the Bayacun Zone have been identified, which are similar dimensions to the main open pit at San Albino.  Importantly, both remain open along strike and downdip, and the Company remains committed to accelerating drilling of the Bayacun Zone and the multiple targets within the Las Conchitas area once San Albino is commissioned.”

Specific comments on significant drill holes reported in this press release are as follows:

Multiple pending holes in this press release have visible mineralization and will be released when assays are received.

The mineralized intervals shown above utilize a 1.0 g/t gold cut-off grade with not more than 1.1 meter of internal dilution. *Widths are reported as drill core lengths.  **Indicates use of metallic screening method for assays.  ***True width is estimated from interpreted sections.  ****Historical dump is interpreted to be “waste” material from the mining operations during the period 1870-1920 and possibly during Spanish times.  The grade and distribution of historical dump material can be erratic and unpredictable.

Drill core was continuously sampled from inception to termination of the drill hole.  Sample intervals were typically one meter.  Drill core diameter was HQ (6.35 centimeters).  Geologic and geotechnical data was captured into a digital database, core was photographed, then one-half split of the core was collected for analysis and one-half was retained in the core library.  Samples were kept in a secured logging and storage facility until such time that they were delivered to the Managua facilities of Bureau Veritas and pulps were sent to the Bureau Veritas laboratory in Vancouver for analysis.  Gold was analyzed by standard fire assay fusion, 30-gram aliquot, AAS finish.  Samples returning over 10.0 g/t gold are analyzed utilizing standard Fire Assay-Gravimetric method.  Due to the presence of coarse gold, the Company has used 500-gram metallic screened gold assays for analyzing samples from mineralized veins and samples immediately above and below drilled veins.  This method, which analyzes a larger sample, can be more precise in high-grade vein systems containing coarse gold. All reported drill results in this press release using the metallic screening method are indicated.  The Company follows industry standards in its QA&QC procedures. Control samples consisting of duplicates, standards, and blanks were inserted into the sample stream at a ratio of 1 control sample per every 10 samples.  Analytical results of control samples confirmed reliability of the assay data.  No top cut has been applied to the reported assay results. 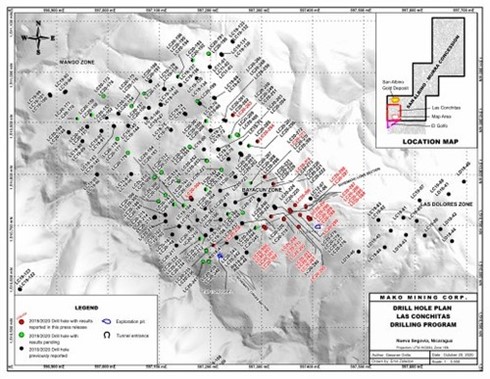 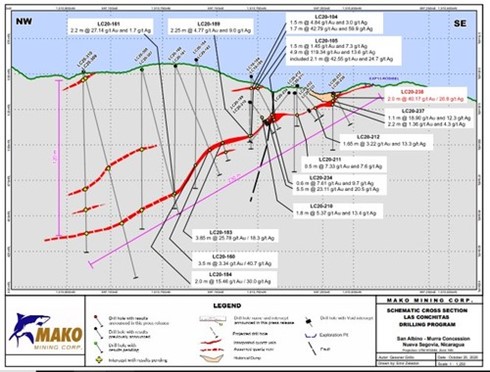 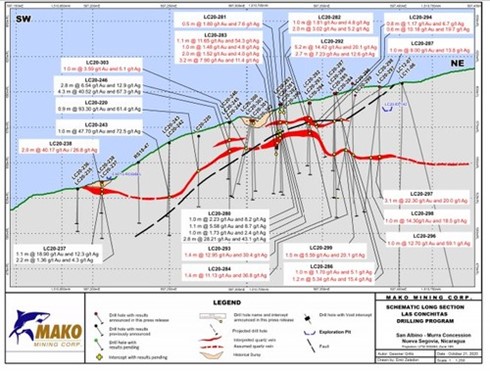