OSPREY GOLD DEVELOPMENT LTD. (TSX-V: OS) (OTCQB: OSSPF) is pleased to announce additional assay results from its 18 hole, 3,044 metre drill program at the Company’s Goldenville Property located in Guysborough County, Nova Scotia. This release includes results for holes G17-08 to GT-15 drilled on the main Goldenville trend, in the immediate vicinity of the Company’s current NI 43-101 Inferred Resource of 2,800,000 tonnes at 3.20 g/t gold for 288,000 ounces of gold (2,800,000 tonnes at 4.96 g/t gold for 447,000 ounces of gold uncapped). Holes G17-1 to G17-7 were previously reported by way of news release dated November 6, 2017. Three holes drilled at Mitchell Lake are still pending and will be reported shortly.

Notable in the 2017 holes are multiple significant intercepts reflecting the mineralized nature of the Goldenville trend where gold is hosted in an array of stacked quartz veins and host rocks within a large anticlinal fold.

More complete assay results from the program are available below in Table 1, with collar location data in Table 2. In addition, a plan map displaying drill collars from this program in relation to historic drill collars and shaft locations for past producing mines on the property can be seen below in Figure 1, and at the Company’s website (www.ospreygold.com).

Company President Cooper Quinn said, “We’re very happy with the results of this program. These results support the potential to expand our current resource at Goldenville. The drill program also tested for broader zones of mineralization outside of the vein-hosted gold; this was successful in the southern limb of the Goldenville anticline in hole G17-14 which contained multiple intercepts of lower grade mineralization within the host rock. In the northern limb, results in the Bluenose Mine shaft area are very encouraging, returning the highest grades Osprey has drilled to date as well as broad zones of mineralized host rock and quartz veining, highlighted in hole G17-15 drilled over 300 m along strike to the east from G17-14.”

Holes G17-08, 09, 10, 11, and 15 were drilled near the historic Bluenose Mine shaft area testing the north limb of the Goldenville anticline across approximately 500 m of strike length. All of the holes in this area intersected multiple zones of gold mineralization, usually associated with quartz veining in argillite horizons. Hole G17-08 contained multiple mineralized horizons, including 6.90 m of 2.74 g/t gold from 231.10 m, and 0.70 m of 98.29 g/t gold from 267.5 m. This area saw less prior exploration, and less previous production than the main Stuart Shaft area and remains open to the east of hole G17-11, the easternmost hole drilled on the north limb, which returned 28.42 g/t gold over 0.55 m from 173.65 m, and multiple shallower gold intersections. 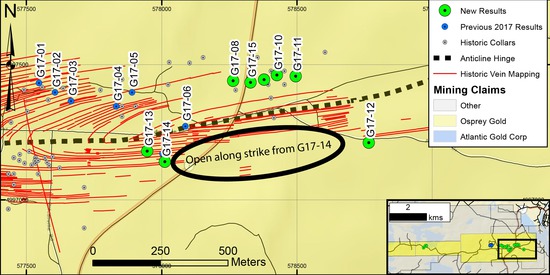 Osprey is focused on exploring five historically producing gold properties in Nova Scotia, Canada. Osprey has the option to earn 100% (subject to certain royalties) in all five properties, including the Goldenville Gold Project, Nova Scotia’s largest historic gold producer. Goldenville hosts a current NI 43-101 Inferred Resource of 2,800,000 tonnes at 3.20 g/t gold for 288,000 ounces of gold (2,800,000 tonnes at 4.96 g/t gold for 447,000 ounces of gold uncapped) near the town of Sherbrooke, NS. All five properties in Osprey’s current portfolio have a history of high-grade gold production. A copy of the Company’s technical report titled “Technical Report on the Goldenville Property, Guysborough County, Nova Scotia Canada” prepared by by David G. Thomas, M.Sc., P. Geo. and Neil Pettigrew, M.Sc., P. Geo. is available under the Company’s profile at www.SEDAR.com.

Samples from the 2017 exploration program are cut with a diamond saw, and placed in sealed bags and shipped to Bureau Veritas Commodities in Timmins, ON for sample preparation, with pulps subsequently shipped to Vancouver, BC for gold and multi-element ICP analysis. A Quality Control/Quality Assurance program, including the insertion of Duplicates, Standards, and Blanks, has been implemented. All quality control samples were acceptable. The 2017 exploration program is performed under the supervision Perry MacKinnon, P.Geo, Vice President of Exploration of Osprey and a ‘Qualified Person’ under NI 43-101. Mr. MacKinnon has reviewed and approved the technical content of this release.