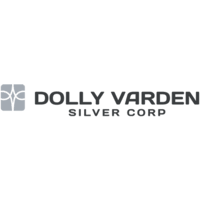 Dolly Varden Silver Corporation (TSX-V: DV) (OTC: DOLLF), is pleased to announce that it has closed its previously announced private placement of units of the Company pursuant to which the Company issued 14,084,500 Units at a price of $0.71 per Unit for aggregate gross proceeds of approximately $10,000,000. The Offering was led by Mackie Research Corporation, as sole bookrunner, and Eventus Capital Corp. as co-lead agents

Each Unit is comprised of one common share of the Company and one-half of one Common Share purchase warrant. Each Warrant is exercisable to acquire one Common Share at a price of $1.10 per Warrant Share for a period of 24 months from the closing of the Offering. Provided that if, at any time prior to the expiry date of the Warrants, the closing price of the Common Shares on the TSX Venture Exchange, or other principal exchange on which the Common Shares are listed, is greater than $1.75 for 10 consecutive trading days, the Company may, at the Company’s discretion, and at any time going forward, within 15 days of the occurrence of such event, deliver a notice to the holders of Warrants accelerating the expiry date of the Warrants to the date that is 30 days following the date of such notice

Any unexercised Warrants shall automatically expire at the end of the Accelerated Exercise Period.

Pursuant to the ancillary rights agreement between Hecla Canada Ltd. and the Company, dated September 4, 2012, Hecla exercised its anti-dilution right in respect of the Offering and acquired 1,881,896 Units at the Offering Price for proceeds of approximately $1.3 million to maintain its pro-rata equity interest in the Company. The Units issued to Hecla were in addition to those issued as part of the Offering.

The Company intends to use the net proceeds from the Offering for further exploration, mineral resource expansion and drilling at the Dolly Varden silver property in northwestern British Columbia, Canada, working capital and general corporate purposes.

Eric Sprott, through 2176423 Ontario Ltd., a corporation which is beneficially owned by him, acquired 2,500,000 Units pursuant to the Offering. After closing of the Offering, Mr. Sprott now beneficially owns or controls 22,183,982 Common Shares and 1,250,000 Common Share purchase warrants representing approximately 18.3% of the issued and outstanding Common Shares on a non-diluted basis and 19.1% on a partially diluted basis assuming exercise of all warrants held by 2176423 Ontario Ltd.

In connection with the Offering, the Agents received an aggregate cash fee equal to 6.0% of the gross proceeds from the Offering. In addition, the Company issued to the Agents 845,070 non-transferable compensation warrants. Each Compensation Warrant entitles the holder thereof to purchase one Common Share at an exercise price equal to the Offering Price for a period of 24 months following the closing of the Offering.