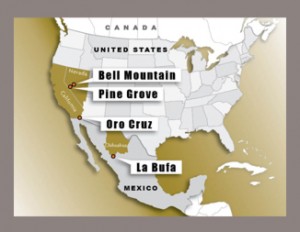 Lincoln Mining Corporation (TSX VENTURE:LMG) announces that further to its news releases dated November 22, 2012 and November 28, 2012, the US regulatory authority has completed its review of the Company’s United States mineral properties and the previously announced financing transactions involving Procon Mining and Tunnelling Ltd. and certain of its affiliates, including China National Machinery Industry Corporation. Sinomach is a state owned entity of the government of China.

As a result of the regulatory review, the Company, Sinomach, PM&T and its affiliate Procon Resources Inc. are withdrawing a Joint Voluntary Notice filed on April 1, 2013 with the Committee on Foreign Investment in the United States and have transmitted a letter of commitment to CFIUS.

Pursuant to the Letter, Lincoln and Procon have committed to CFIUS that Procon will, within 120 days after the date of the Order, divest its entire investment in Lincoln to a third party investor that is acceptable to CFIUS. If Procon, after making best efforts to divest its interest in Lincoln, is unable to divest all of its interest within 120 days, Lincoln and Procon can apply for an extension of up to 60 additional days, subject to approval by CFIUS. The Company understands that the terms of the Letter will form the basis of an order to be issued by CFIUS.

Sinomach, through its 61% ownership of China CAMCE Engineering Co., Limited indirectly owns 60% of PRI’s outstanding common shares. PRI currently holds 46,000,000 common shares of Lincoln and a convertible debenture in the principal amount of C$2,300,000 which is due and payable on November 22, 2015. The Procon Debenture is convertible at any time, in whole or in part at the election of the holder, into up to 23,000,000 common shares of the Company on the basis of one common share for each C$0.10 of principal. The Procon Debenture bears interest at the rate of 6% per annum, calculated and payable monthly, on the outstanding principal amount, and is secured by a general security agreement granted by the Company. The Procon Shares and Procon Debenture were acquired by Procon pursuant to various financings completed by the Company in September and November 2012

The Letter also provides, among other things, that:

Lincoln remains committed to advancing its exploration and development programs on the US Properties and will work with Procon to comply with the requirements of the Letter and to cooperate in facilitating PRI’s divestment of the Procon Shares and Procon Debenture to a third party, subject to the requirements of applicable securities laws and the Order. At this time, the Company is not aware of any such third party purchaser and there can be no assurances that a third party purchaser acceptable to CFIUS will be identified, and that the divestment will be completed, within the time required by the Order.

With the resignation of Robert Cruickshank as a director effective June 17, 2013, the Company is now reviewing potential director candidates. Until such time as an additional independent director is appointed to the board, the Company’s audit committee will be comprised of Andrew Milligan, James Dales and Paul Saxton.

Lincoln also announces that it has received a C$300,000, unsecured demand loan from Prairie Enterprises (Alberta) Incto fund Lincoln’s current working capital requirements. PE is owned and controlled by Edward Yurkowski, who is a director of the Company.

Lincoln Mining Corp. is a Canadian precious metals exploration and development company with several projects in various stages of exploration and development which include the Pine Grove and the Bell Mountain gold properties in Nevada, the Oro Cruz gold property in California and the La Bufa gold-silver property in Mexico. In the United States, the Company operates through its Nevada subsidiaries, Lincoln Gold US Corp. and Lincoln Resource Group Corp.