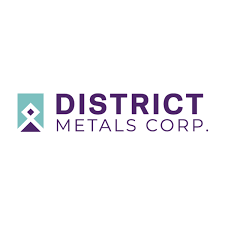 Drill holes TOM21-017 and -018 were drilled west of and below historic open pits where copper sulphides were historically extracted at the Gårdsgruvans zone in the southwest portion of the Tomtebo Mine. Hole TOM21-017 successfully intersected vein networks of copper-rich sulphides within strongly altered felsic volcanic rocks down dip of previously reported hole TOM21-016, which returned 17.2 m at 1.42% CuEq1 (191.6 to 208.8 m).

The Rödbergsgruvan zone was drilled with holes TOM21-019 to -022 where the strongest mineralization was encountered in hole TOM21-019 as disseminated, vein/stringer, and semi-massive copper sulphides.

The following drill intercepts are highlighted below:

Garrett Ainsworth, CEO of District, commented: “Drill assay results from the Gårdsgruvans and Rödbergsgruvan zones continue to expand a large and robust copper-gold feeder zone that is wide open at depth and to the southwest towards favourable geophysical anomalies. Hole TOM21-017 encountered numerous stacked lenses of polymetallic sulphide mineralization that indicates multiple mineralizing events occurred over a long period of time, which is another important feature of other large polymetallic deposits in the Bergslagen District.

We are excited to commence our fully funded 5,000 m Phase II drill program at Tomtebo in October with enhanced targeting through the compilation of our recently acquired exploration data. Step out drilling at the historic Tomtebo Mine will be guided by our drill assays, whole rock geochemical and geological interpretations. Regional drilling will focus on coincident gravity, magnetic, and conductive anomalies that are located up to 1 km northeast and 600 m southwest along trend from the Tomtebo Mine.”

Hole TOM21-017 was drilled at an angled orientation (-58° dip) to the southeast (110° azimuth) as a step out below previously reported hole TOM21-016, which returned 17.2 m at 0.94% Cu and 0.28 g/t Au (191.6 to 208.8 m). Hole TOM21-017 is dominated by altered felsic volcanic rocks with varying assemblages of phlogopite-muscovite and cordierite/andalusite blasts. Locally, well preserved volcanic textures indicate arcuate-elliptical perlitic features, supporting a glassy lava or very shallow intrusive (rhyolitic lava dome) setting as a host to a significant part of the vein-style sulphide mineralization. These glassy rhyolitic domes often mark the center of VMS systems, whereas the massive sulphide mineralization would normally occur at the margin of these rhyolitic bodies. Multiple intervals of dark grey quartz-chlorite-anthophyllite-cordierite alteration with local pyrite-chalcopyrite impregnations and stringers were observed from 92.0 to 99.0 m, 107.0 to 110.0 m, and 155.0 to 166.0 m.

A zone of strongly altered dark-grey quartz-phlogopite-chlorite-cordierite alteration with locally abundant anthophyllite and magnetite is associated with significant pyrrhotite-pyrite-chalcopyrite mineralization from 193.0 to 223.0 m, which is interpreted as ‘feeder’ sulphide veins in the core of a sub-seafloor hydrothermal system.

An additional zone of intense dark phlogopite-chlorite-cordierite altered rocks starts at 267.0 m with both copper and silver-zinc-lead vein-style mineralization. Veinlet and disseminated silver-zinc-lead mineralization was observed from 269.0 to 275.0 m, which could indicate several pulses of mineralization that cross-cut and precipitated at different temperatures. The alteration intensity decreases at a depth of 297.0 m until the end of the hole depth at 320.0 m.

Hole TOM21-018 was drilled at an angled orientation (-60° dip) to the southeast (105° azimuth) as a follow up to historic hole TOM67-001, which was drilled horizontally to the west from the exploration drift on the -200 m level, and returned 4.3 m at 1.35% Cu. Hole TOM21-018 was dominated by relatively unaltered fine grained felsic volcanic ash silt-sandstones (hanging wall type) with intercalated meter sized mafic dykes to a depth of 99.0 m. The alteration intensity increases, dominated by quartz-phlogopite-muscovite with local disseminations of pyrite and cordierite/andalusite blasts. Two zones of strongly altered felsic volcanic rocks host disseminated, stringer, and vein-style copper sulphide mineralization that is dominated by pyrite-pyrrhotite-chalcopyrite. These mineralized intervals were observed from 175.0 to 195.0 m and 218.0 to 237.0 m. Moderately quartz-phlogopite/muscovite altered felsic volcanic rocks with local trace pyrite continued until the end of hole depth at 291.0 m.

Holes TOM21-019 to -022 were drilled from the same pad in the southern part of the historic Tomtebo Mine. The planned holes were designed to test the 3D modelled mineralized domains anchored by historic drill holes TOM56-003 and -004 along with the historic Rödbergsgruvan mine pit.

Hole TOM21-019 (006° azimuth, -45° dip) followed up on historic hole TOM56-003 which returned 2.3 m at 21% Zn, 5% Pb, and 0.6% Cu (50.0 to 52.3 m) that was within 8.3 m at 0.5% Cu (49.0 to 57.3 m). Hole TOM21-019 was initially dominated by moderate to strongly altered felsic volcanic rocks that contained two zones of pyrite-chalcopyrite impregnation associated with dark, quartz-phlogopite/chlorite-anthophyllite-cordierite alteration from 30.0 to 37.0 m and 53.0 to 57.0 m. A significant mineralized zone, dominated by semi-massive pyrite-pyrrhotite-chalcopyrite and strong impregnation plus vein/stringer-style mineralization was observed from 68.0 and 86.0 m. Weak zinc-lead sulphide (sphalerite-galena) mineralization was observed from 68.0 and 72.0 m. Moderately altered quartz-phlogopite/muscovite-andalusite/cordierite with local relicts of perlitic features continue until the end of the hole depth at 150.0 m.

Hole TOM21-020 (000° azimuth, -65° dip) was designed to step out below TOM21-019. Hole TOM21-020 was dominated by moderate to strongly altered felsic volcanic rocks, similar to TOM21-019 and other drill holes within the Gårdsgruvan zone. Meter sized intervals of pyrite-pyrrhotite dominant semi-massive, vein, and stringer sulphides were observed at 105.0 m and 127.0 m. Altered felsic volcanic rocks continue with cross cutting meter sized mafic dykes until the end of hole depth at 190.0 m. 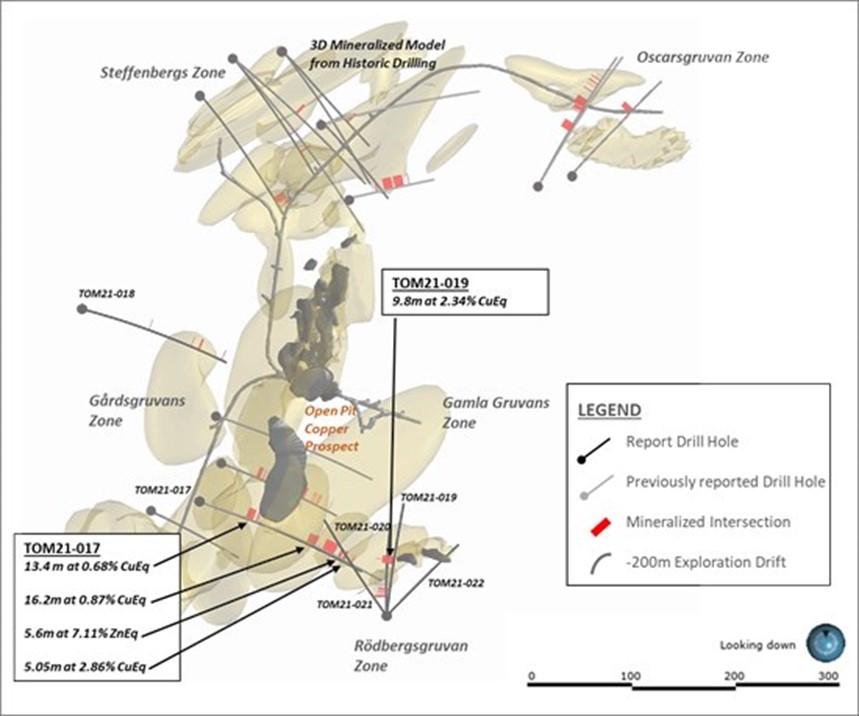 Figure 1: Plan View of Drill Holes at Tomtebo Mine 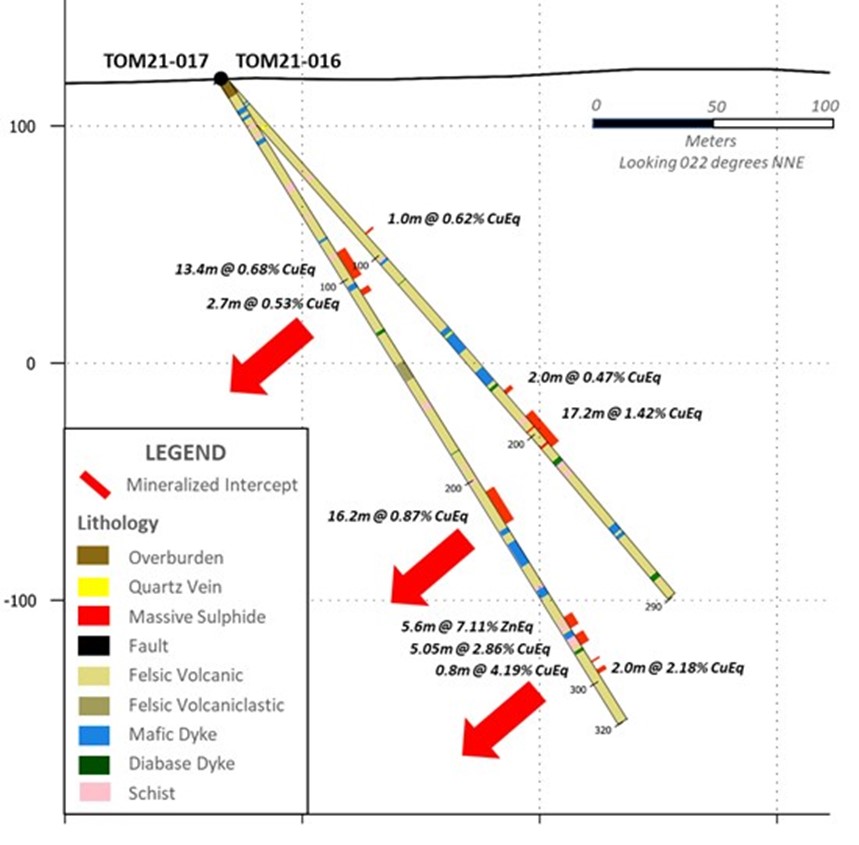 All scientific and technical information in this news release has been prepared by, or approved by Garrett Ainsworth, PGeo, President and CEO of the Company. Mr. Ainsworth is a qualified person for the purposes of National Instrument 43-101 – Standards of Disclosure for Mineral Projects.

The drill core reported in this news release was logged and prepared at the District Metals AB core facility in Säter, Sweden before submittal to ALS Geochemistry in Malå, Sweden where the drill core is cut, bagged, and prepared for analysis. Sample pulps were sent to ALS Geochemistry in Ireland (an accredited mineral analysis laboratory) for analysis. Samples were analyzed using a multi-element ultra trace method combining a four-acid digestion with ICP-MS analytical package (“ME-MS61”). Over limit sample values were re-assayed for: (1) values of copper >1%; (2) values of zinc >1%; (3) values of lead >1%; and (4) values of silver >100 g/t using the high-grade material ICP-AES analytical package (“ME-OG62”). Additional over limit sample values were re-assayed for: (1) values of zinc >30%; (2) values of lead >20% using the high precision analysis of base metal ores AAS analytical package (“Zn, Pb-AAORE”). Gold, platinum, and palladium were analyzed using the 30 g lead fire assay with ICP-AES finish analytical package (“PGM-ICP23”). Certified standards, blanks, and duplicates were inserted into the sample shipment to ensure integrity of the assay process. Selected samples were chosen for duplicate assay from the coarse reject and pulps of the original sample. No QA/QC issues were noted with the results reported.

District Metals Corp. is led by industry professionals with a track record of success in the mining industry. The Company’s mandate is to seek out, explore, and develop prospective mineral properties through a disciplined science-based approach to create shareholder value and benefit other stakeholders.

The advanced exploration stage Tomtebo Property is located in the Bergslagen Mining District of south-central Sweden is the Company’s main focus. Tomtebo comprises 5,144 ha and is situated between the historic Falun Mine and Boliden’s Garpenberg Mine that are located 25 km to the northwest and southeast, respectively. Two historic polymetallic mines and numerous polymetallic showings are located on the Tomtebo Property along an approximate 17 km trend that exhibits similar geology, structure, alteration and VMS/SedEx style mineralization as other significant mines within the district. Mineralization that is open at depth and along strike at the historic mines on the Tomtebo Property has not been followed up on, and modern systematic exploration has never been conducted on the Property.