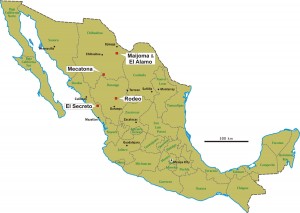 Camino Minerals Corporation (TSX VENTURE:COR) is pleased to announce that diamond drilling has commenced at the El Secreto Gold and Silver Project located in Sinaloa State, Mexico. Camino’s 3,000 metre diamond drill program will test nine different exploration targets within an extensive vein field that is over 60 square kilometres in size. Three of these targets were drilled by the Company in an earlier reverse circulation program with the remainder being new exploration targets that have never been tested before.

The three targets previously drilled by Camino, the Corn Field Vein, the El Secreto Vein and the Southwest Vein, returned anomalous gold and silver mineralization and were highly anomalous in arsenic and antimony. In a paper written by Erme Enriquez, 1995, titled Trace Element Zonation and Temperature Controls of the Tayoltita Ag-Au Hydrothermal System, San Dimas District, Durango, Mexico, high arsenic and antimony values are found above the “Favourable Zone”, which hosts all of the deposits at San Dimas. The Company believes that the mineralization encountered in earlier drilling is situated high in a mineral system and that significant gold and silver mineralization may exist at depth in stockwork zones and ore shoots.

At the El Secreto Zone, 5 kilometres east of the Corn Field Zone, drilling will test at depth the El Secreto Vein, which has been traced for over 500 metres and contains two artisanal adits: the upper adit and the lower adit. A rock sample collected from the upper adit returned 11.9 g/t Au and 50.8 g/t Ag and a 1.5 metre chip sample taken from the lower adit returned 15.25 g/t gold, 41.8 g/t silver and 0.12% lead.

Chip samples taken from the Southwest Vein have returned values up to 8.51 g/t Au and 13.25 g/t Ag over 6 metres and 3.05 g/t Au, 67.8 g/t Ag and 0.17% Cu over 1 metre. Traced for over 750 metres, the Southwest Vein has only been tested by one drill hole, Hole SE-12-003, which returned 19.5 metres of 0.34 g/t Au and 21.5 g/t Ag. Like both the Corn Field Vein and the El Secreto Vein, Camino believes that deeper drilling at the Southwest Vein may lead to the discovery of significant gold and silver mineralization.

Camino’s property wide exploration program has successfully identified a number of new promising drill targets, each of which represent a discovery opportunity. These targets include the Corn Field South Vein, the El Molino Vein, the Santos Vein, the Dalila Vein, the Cerro Verde Zone and Rio Verde Zone.

In addition to numerous epithermal and mesothermal vein systems, El Secreto also hosts porphyry targets. At the Cerro Verde Zone, sheeted veins with threads of chalcopyrite and malachite staining can be observed. Located approximately 5.5 km south, chip samples from the Rio Verde Zone have returned values up to 0.2 g/t Au, 110 g/t Ag and 2.8% Cu over 1 metre and 0.05 g/t Au, 614.0 g/t Ag, 0.2% Cu and 0.9% Pb over 4 metres. Both the Cerro Verde Zone and the Rio Verde will be tested during this round of drilling.

“With more than $2.6 million in the treasury and a number of excellent exploration targets to be drilled, each offering a discovery opportunity, we look forward to reporting positive news to our shareholders,” said Gordon Davis, Camino’s Chairman and CEO.

El Secreto is situated along the western edge of the Sierra Madre Occidental in a structural setting similar to Primero’s San Dimas Mine, located 30 kilometres to the northeast. San Dimas produced 102,000 gold equivalent ounces in 2011. Primero recently announced plans to increase mine throughput from the current 1,925 tonnes per day to 2,500 tonnes per day by the end of the first quarter of 2014. This expansion will allow for an average production target of 160,000 gold equivalent ounces per year over the next five years. Historical production from the San Dimas district is estimated at 11 million ounces of gold and 582 million ounces of silver.

Updated maps and images can be viewed by visiting Camino’s Web site at www.caminominerals.com.

About the El Secreto Gold and Silver Project

Recently consolidated by Arcelia Gold Corp. a private BC company, through staking and the acquisition of privately held claims, El Secreto consists of three mineral concessions encompassing over 12,000 hectares (49 square miles). The Project is located approximately 100 kilometres northeast of Mazatlan, Sinaloa State, and is accessible by paved and gravel roads. The geology and mineralization obtained to date suggests that El Secreto is highly prospective for the discovery of epithermal and mesothermal gold-silver vein systems. Camino has an option to earn up to an 80-per-cent interest in El Secreto from Arcelia.

Camino is a discovery-oriented mineral exploration company formed in connection with Goldcorp’s C$300-million acquisition of Canplats Resources Corp. The Company is led by Canplats’ former management and is focused on precious and base metal projects located in Mexico. For more information on Camino’s projects, please refer to Camino’s website at www.caminominerals.com.