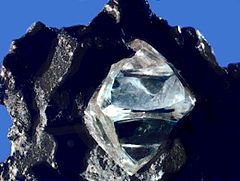 Diamcor Mining Inc. (TSX-V.DMI) (OTCQX-DMIFF), an emerging producer of rough diamonds, announces that it has closed the non-brokered private placement announced on June 4, 2013. The previously announced Offering of up to 1,500,000 units at a price of $1.25 per Unit was oversubscribed, with the Company issuing 1,587,784 units at a unit price of $1.25 per Unit for gross proceeds of $1,984,730.  Each Unit consists of one common share of the Company and one-half of one common share purchase warrant.  Each whole Warrant entitles the holder thereof to purchase one Share at an exercise price of $1.75 per share until the close of business on June 17, 2016.  Securities issued pursuant to the Offering will be subject to a hold period ending on October 18, 2013. Upon closing the Offering, the Company has 35,142,678 shares issued and outstanding.

The Proceeds from the Offering will be used for operating capital to support the continued advancement of the Company’s Krone-Endora at Venetia Project, planned ramping up of operations currently underway, the continued processing of material aimed at recovering additional rough diamonds for planned sales in the short-term, and for general and corporate purposes.

The Company will pay aggregate finder’s fees of seven per cent in respect of an aggregate of $438,320 invested under the Offering, for total finder’s fees of $30,682.40 in cash.  The Company will also issue an aggregate of 24,546 broker warrants exercisable to purchase up to 24,546 Shares of the Company at a price of $1.75 per Share until June 17, 2016.  In accordance with the policies of the TSX Venture Exchange, the broker warrants are non-transferable.  Common shares issued upon exercise of the broker warrants will also be subject to a hold period ending on October 18, 2013.

Diamcor Mining Inc. is a fully reporting publically traded junior diamond mining company which is listed on the TSX Venture Exchange under the symbol V.DMI, and on the OTC QX International under the symbol DMIFF.  The Company has a well-established operational and production history in South Africa, extensive experience supplying rough diamonds to the world market, and has established a long-term strategic alliance with world famous Tiffany & Co.  Rather than exposing itself to the high risks and costs associated with exploration, the Company’s focus is on the identification, acquisition, and operation of unique diamond projects with near-term production potential such as the Krone-Endora at Venetia Project.