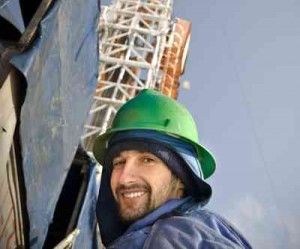 Denison Mines Corp. (TSX:DML)(NYSE MKT:DNN) has completed a second fence of drilling in the vicinity of drill hole WR-489 that has extended unconformity uranium mineralization along strike by 65 metres. The area is 2.1 kilometres northeast of the Phoenix deposits and is now being referred to as the 489 Zone.

The winter drill program is now complete at Wheeler River. A total of 14,577 metres was drilled in 27 drill holes. Sixteen of the drill holes were completed on five different exploration target areas (489 Zone, K Zone, Phoenix North, 232 area and the REA area) on the Wheeler River property. The highlight of the program was the discovery of new unconformity related uranium mineralization at the 489 Zone. Located approximately 2.1 kilometres northeast of the Phoenix deposits the 489 Zone straddles the sub-Athabasca unconformity at a vertical depth of 380 meters below surface, on top of faulted graphitic gneiss. Rock types, alteration and structure are similar to the Phoenix deposits. Mineralization has now been intersected on both drill hole fences completed to date – 65 metres apart, and the zone is open along strike in both directions. A summer drill program is planned to aggressively follow up on these results.

On the other four exploration target areas, encouraging geochemistry and alteration was observed at Phoenix North, and the K Zone. Further work is required to follow up on these results – some of which will be a part of this summer’s activities. No significant mineralization, alteration or geochemistry was observed at the 232 and REA areas.

The Wheeler River property lies between the McArthur River mine and Key Lake mill complex in the Athabasca Basin in northern Saskatchewan. Denison is the operator and holds a 60% interest in the project. Cameco Corporation holds a 30% interest and JCU (Canada) Exploration Company, Limited holds the remaining 10% interest.

As reported previously, uranium mineralization was intersected at Hatchet Lake in two drill holes on the northern portion of the Crooked-Richardson Lakes trend. Chemical assays have now been received for this drilling and the best result was in drill hole RL-13-16, which intersected 0.45% U3O8 over 2.3 metres beginning at 124.0 metres down the drill hole. Further drilling is required to follow up on these results.

The disclosure of a scientific or technical nature contained in this news release was prepared by Steve Blower, P.Geo., Denison’s Vice President, Exploration, who is a Qualified Person in accordance with the requirements of NI 43-101. For a description of the quality assurance program and quality control measures applied by Denison, please see Denison’s Annual Information Form dated March 13, 2013 filed under the Company’s profile on SEDAR at www.sedar.com.

Denison Mines Corp. is a uranium exploration and development company with interests in exploration and development projects in Canada, Zambia and Mongolia. Including the world class Phoenix deposits, located on its 60% owned Wheeler River project, Denison’s exploration project portfolio includes 32 projects and totals over 530,000 hectares in the Eastern Athabasca Basin region of Saskatchewan. Denison’s interests in Saskatchewan also include a 22.5% ownership interest in the McClean Lake Joint Venture, which includes several uranium deposits and the McClean Lake uranium mill, one of the world’s largest uranium processing facilities, and a 25.17% interest in the Midwest deposit, which is located 15 kilometres from the McClean Lake mill. Internationally, Denison owns 100% of the conventional heap leach Mutanga project, in Zambia, and an 85% interest in the in-situ recovery projects held by the Gurvan Saihan Joint Venture, in Mongolia.

Denison is engaged in mine decommissioning and environmental services through its Denison Environmental Services (DES) division and is the manager of Uranium Participation Corporation (TSX:U), a publicly traded company which invests in uranium oxide in concentrates and uranium hexafluoride.