Andy Yackulic, P. Geo., Denison’s Director, Exploration, commented, “The latest results from McClean South are quite exciting. Not only has drilling intersected very high-grade uranium, but the mineralization is open along strike to the west for at least 250 metres and approximately 70 metres to the east towards the McClean South 8E pod. The mineralized intersection in MCS-34 represents one of the better mineralized intersections reported on the McClean Lake property to date – which is impressive, as the property has been explored since the mid-1970s and has previously produced over 50 million pounds U3O8.”

David Cates, Denison’s President & CEO, added “The discovery of new high-grade uranium mineralization at McClean South reminds us of the significant potential associated with Denison’s portfolio of development and exploration interests in the Athabasca Basin.  Orano Canada is a world-class business partner and the operator of Denison’s 22.5% owned McClean Lake uranium mill.  With excess licensed capacity at the McClean Lake mill, any meaningful new uranium discovery on the McClean Lake property has the potential to translate into an important source of future mill feed and ultimately considerable value for the MLJV and its owners.”

Drill hole MCS-34 was designed to test a potentially significant gap in drilling west of the McClean South 8E pod, where historical drilling was believed to have tested too far to the north of the optimal target area. Drill hole MCS-34, which was drilled at an azimuth of 345° and a dip of -60°, targeted the extension of the McClean South conductor approximately 120 metres west of the McClean South 8E pod and successfully intersected high-grade unconformity-associated uranium mineralization at an approximate depth of 182 metres – returning a mineralized interval of 5.04% eU3O8 over 14.0 metres (including 14.86% eU3O8 over 3.9 metres).  Due to deteriorating surface conditions, owing to warming weather towards the end of the exploration program, follow-up of this result on section was not possible.

Drill hole MCS-26, was designed to test the up-dip extension of basement mineralization discovered in historical drill hole MCS-13 at the unconformity. The hole was collared approximately 12.5 metres north of MCS-13 and drilled at an azimuth of 345° and a dip of -78°. MCS-26 intersected low-grade mineralization approximately 49 metres below the unconformity, coincident with the basal contact of an anatectic granite.

Drill hole MCS-31, drilled at an azimuth of 345° and a dip of -80°, was designed to test the 120 metre gap between historical drill fences immediately east of the McClean South 8E pod on Line 835E of the 2005 McClean South EM survey grid. Low-grade mineralization was intersected in the basement, approximately 50 metres below the unconformity contact, associated with a redox front located along the basal contact of a graphitic pelite.

Following the completion of a drill hole, the hole is radiometrically logged using a downhole slimline gamma probe, which collects continuous readings of radioactivity along the length of the drill hole. Probe results are then calibrated using an algorithm calculated from the comparison of probe results against geochemical analyses in the area. The gamma-log results provide an immediate radiometric equivalent uranium value (eU%, then converted to eU3O8%) for the hole, which, except in very high grade zones, is reasonably accurate. The Company typically reports eU3O8, as a preliminary result and subsequently reports definitive assay grades following sampling and chemical analysis of the mineralized drill core.

All assayed core is split in half, with one half retained and the other sent to the SRC Geoanalytical Laboratory in Saskatoon for analysis. Control samples are routinely assayed with each batch of core samples analyzed.

The McClean South trend is located parallel to and approximately 500 metres south of the McClean North trend in the southwestern portion of the property (see Figure 1).  The McClean South target area has been the subject of historic exploration drilling, resulting in the discovery and subsequent delineation of the 8W and 8E pods, which are situated along a N70° to 80° trend in close proximity to the McClean Lake granitic dome to the south (see Figure 2). The dip of the geology appears to range from 45° to 65° S in the 8W pod. In contrast, the dip within the 8E pod is steeper and undulating but is most commonly around 80° S. Several graphitic horizons of varying thickness are present in the McClean South target area and extend beyond and into other parts of the property.

No current resource estimate, prepared in accordance with NI 43-101, exists for the mineralization identified to date at the McClean South pods.

The McClean Lake property is located on the eastern edge of the Athabasca Basin in northern Saskatchewan, approximately 750 kilometres north of Saskatoon. Denison holds a 22.5% ownership interest in the MLJV and the McClean Lake uranium mill, one of the world’s largest uranium processing facilities. The mill has licensed annual production capacity of 24.0 million pounds U3O8, and is currently operating under a 10-year license expiring in 2027. The mill is contracted to process the ore from the Cigar Lake mine under a toll milling agreement (up to 18.0 million pounds U3O8 per year). The MLJV is an unincorporated contractual arrangement between Orano Canada with a 77.5% interest and Denison with a 22.5% interest. Orano Canada is the operator of the project.

Denison is a uranium exploration and development company with interests focused in the Athabasca Basin region of northern Saskatchewan, Canada. The Company’s flagship project is the 90% owned Wheeler River Uranium Project, which is the largest undeveloped uranium project in the infrastructure rich eastern portion of the Athabasca Basin region of northern Saskatchewan. In addition to Denison’s interests in the MLJV, Denison’s interests in Saskatchewan include a 25.17% interest in the Midwest Main and Midwest A deposits, and a 66.90% interest in the Tthe Heldeth Túé (“THT,” formerly J Zone) and Huskie deposits on the Waterbury Lake property. Each of Midwest Main, Midwest A, THT and Huskie are located within 20 kilometres of the McClean Lake mill.

Denison is engaged in mine decommissioning and environmental services through its Closed Mines group (formerly Denison Environmental Services), which manages Denison’s Elliot Lake reclamation projects and provides post-closure mine care and maintenance services to a variety of industry and government clients.

Denison is also the manager of Uranium Participation Corp., a publicly traded company which invests in uranium oxide and uranium hexafluoride.

The technical information contained in this release has been reviewed and approved by Mr. Andrew Yackulic, P. Geo., Denison’s Director, Exploration, who is a Qualified Person in accordance with the requirements of NI 43-101. 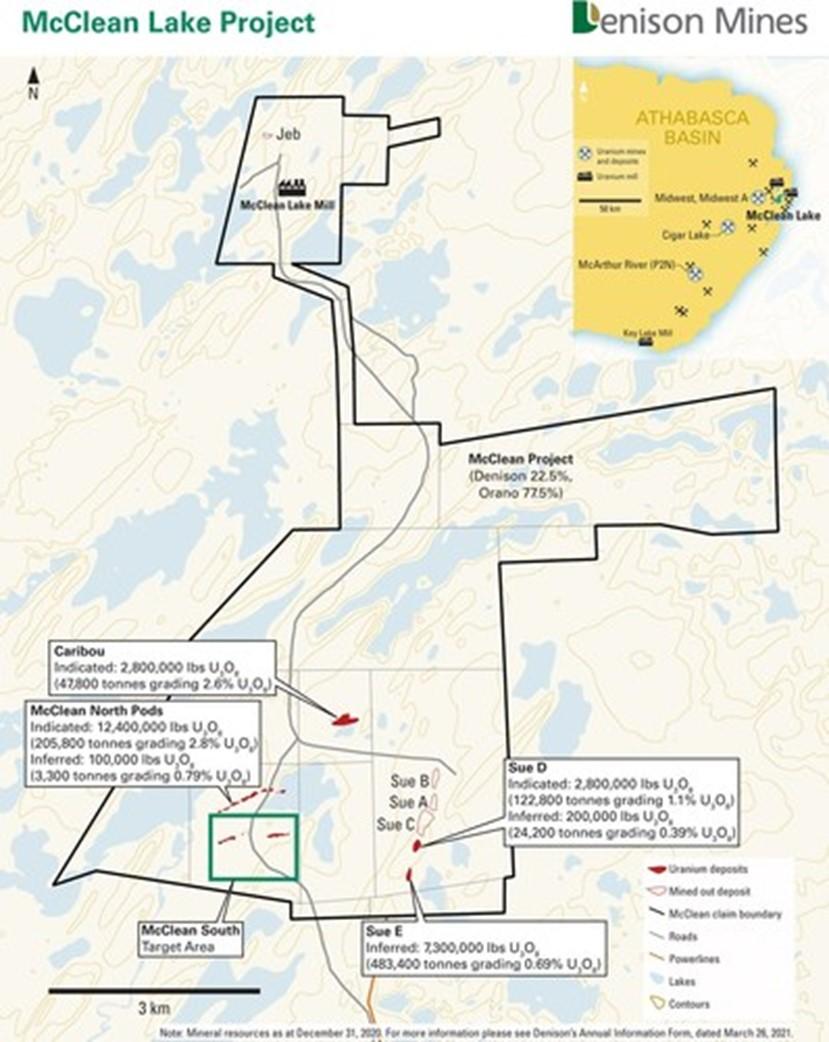 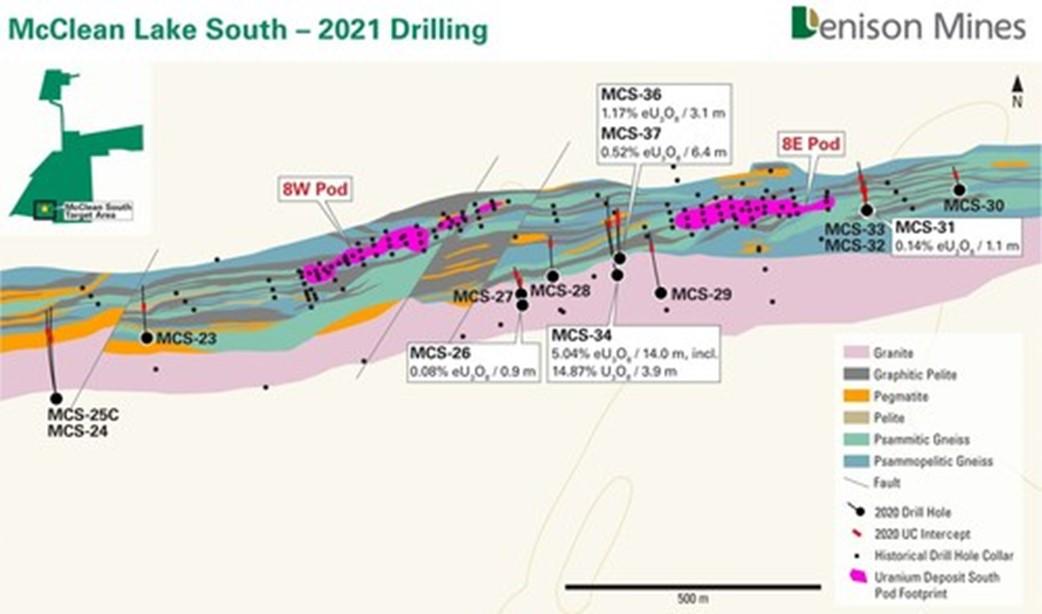