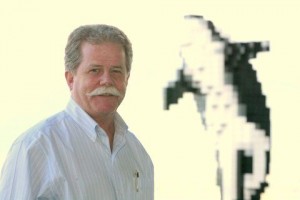 An associate of mine, Branden Haynes, steered me over to Sonoro Metals Corp. (SMO: TSX-V)’s Ken MacLeod, Pres. & CEO, to hear the stories of their Mexican silver and gold properties, and I can see why he was motivated to do so.

While Ken gave me the overview for my intended PDAC wrap-up article, we were joined by some ‘industry heavyweights’ Bob Termuende and Yale Simpson (the latter of Exeter Resource Corp. (XRC: TSX-V XRA: AMEX EXB: FSE)) who both expressed enthusiasm for the strategy being employed by the management team of Sonoro, especially at the 100%-owned Chipriona project in eastern Sonoro State, Mexico, a mining-friendly country your author has now had the pleasure of covering many opportunities within. (Great Panther Silver Ltd. (GPR: TSX, GPL: NYSE MKT), MAG Silver Corp. (MAG: TSX, MVG: NYSE.A)…).

The 420 Ha property, with a mineralized zone of 1,000m x 400m, is about 300 km east of Hermosillo in the Mohave Megashear region of the Sierra Madre Gold Belt, and lies adjacent to Agnico Eagle Mines Ltd. (AEM: NYSE, AEM: TSX)’s 800K oz. gold La India Mine and only 15Km NW of Alamos Gold Inc. (AGI: TSX, AGI: NYSE MKT)’s 2M oz gold Mulatos Mine… a great trend to be within.

A good capital structure, with only 22.2M shares, and 35.8M F/D, bodes well for the future accretive value to shareholders.

Seven years ago your author first met MacLeod who was Pres & CEO of Western GeoPower, which was ultimately sold to RAM Power Corp. (RPG: TSX) for $50M in 2009. Another person should be mentioned in this brief intro: Melvin Herdrick, Exploration Manager, the Mexican-based geo. responsible for the technical discoveries of Pediment Gold Corp., which was sold to Argonaut Gold Inc. (AR: TSX) for $167M in 2011.

A second Mexican property is San Marcial, which we will cover in the future;… and new property acquisitions in the Tintina Gold Belt in Alaska in a Joint Venture with Northern Empire Resources Corp. (NM: TSX-V) formerly Prosperity Goldfields Corp.… more later.

David O’Brien is the owner of Int’l Mining Research Inc. which employs Media, Events and Online exposure programs, including MineSnooper.com. O’Brien also owns W.I.T. Marketing Writing & Media, an ad agency, and has been contributing articles to TheProspectorNEWS.com and magazine, on demand. He owns no shares in the above companies.       dobrien@InternationalMiningResearch.com