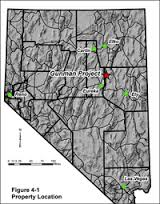 Cypress Development Corp. (TSX-V:CYP) (OTC Pink:CYDVF) (Frankfurt:C1Z) is pleased to announce that the Company has been advised by the United States Department of the Interior (Bureau of Land Management Nevada) that Cypress’ application of a Notice of Intent to conduct exploration activity at its wholly owned 1140 acre Gunman zinc-silver-gold project in the Diamond Range, White Pine County, Nevada, has been received and approved by the BLM.

The Notice of Intent to explore on the Gunman project includes 8 drill sites and 3,775 feet of associated access roads. A financial bond has now been deposited with the BLM  by Cypress and the Gunman project has been assigned BLM case file number NVN-092882.

Cypress Development’s Gunman project is well located on the southern extent of the Carlin Trend and contains carbonate replacement style, high grade zinc and silver oxide mineralization. It is the Company’s intent to extend this type of mineralization along strike while also closely monitoring gold and trace element data. A planned 2014 Phase 1 Reverse Circulation (RC) drill program is expected to commence in early spring.

Cypress Development is now moving forward with a tendering process to select a drill contractor that will complete the 2014 Phase 1, RC drill program this spring. Phase 1 RC drilling will consist, in part, of a confirmation drill program of the high grade RH zone in order to provide high quality data to complete an independent resource estimation at Gunman and to obtain large samples of mineralization for metal recovery studies.

Cominco Ltd. conducted a due diligence investigation of the Gunman project following the discovery of very high zinc and silver mineralization by Cypress in 2000. As part of the due diligence work, Cominco conducted a series of zinc assays using an acetic acid leach method. The results indicate that zinc recovery from oxidized mineralization at Gunman by acetic acid leaching is excellent. A comparison chart of ICP assay vs. Acetic Acid Leach assay is presented below.

The data indicate that a simple heap leach operation could very likely be effective in recovering zinc from oxide mineralization at Gunman. The data above represent only a simple bench scale study on small sample sizes. A more detailed study will be required to confirm and expand upon the very encouraging recovery data obtained by the simple acetic leach test.

Cypress will also explore, via RC drilling, ground adjacent to the RH North discovery hole GD-15 that intersected multiple zones of zinc-silver mineralization approximately 1300 feet north of the high grade RH zone along strike. In addition, the Company will conduct a surface sampling program of carbonate rubble crop in the Far North Target Area as preliminary observations made during recent staking indicate that abundant altered carbonate rock is present in a position on strike with the known high grade mineralization to the south. The sampling will be a soil sample grid and abundant rock chip sampling as a first pass. Identification of significant zinc-silver mineralization in the north portion of the Gunman property would immediately increase the scope of the project.

Mineralization at the Gunman project appears to be controlled by a series of well developed NNE trending fracture zones. This setting is seen in other locations along the Carlin and the Battle Mountain gold trends where the NS to NNE alignments of mineralized zones are located in cross cutting structural zones within or adjacent to the main NNW striking trends. The mineralization of the zinc-silver zones on the Gunman is located close to surface. The very high grade of zinc-silver mineralization seen in the RH zone is a compelling reason to continue exploration on the Gunman project.

Past surface sampling and drilling by Cypress on the Gunman property has resulted in the discovery of a series of zones of zinc-silver mineralization over a strike length of 2500 feet. The northern most mineralization known (hole GD-15) on the property was discovered at the end of the most recent drill program in 2007 and this mineralization remains essentially unexplored.

Significant zinc and silver assays previously reported by Cypress from the Gunman project include: