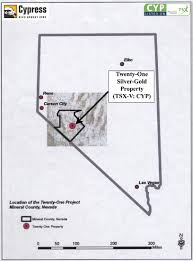 With the majority of past drilling on the Gunman project predating National Instrument (NI) 43-101 Cypress has commissioned Riverbend Geological Services of Beausejour, Manitoba to complete an independent NI 43-101 Technical Report. The Technical Report and recommendations will be used by Cypress in the planning of a RC drill program in order to complete an independent NI 43-101 Compliant Resource Estimate on the Gunman RH Zone. The Company anticipates that this drill program will commence in early April.

A strike length of approximately 2 miles (south to north) has been staked to allow Cypress to effectively explore for additional high grade zinc-silver oxide and sulphide mineralization along the contact of Permian age carbonate-clastic units and recent gravels created by a range front normal fault.  The mineralized carbonate unit at the Gunman project is localized within the east limb of a fault bounded syncline. The shallow mineralization consists of very high grade zinc-silver oxides and local sulphides along with arsenic, gold and mercury mineralization within karsted and strongly oxidized, Permian age silty limestone host rocks.  The dominant surface expression of the known zone is a series of jasperiod outcrops and subcrops.  These jasperiods are anomalous in zinc-silver-arsenic-gold-antimony and mercury.

Previously reported assays from Cypress drilling in 2000 include zinc values in the 5% to plus 30% range with silver values of 10ppm to plus 200ppm (up to 8 ounce/ton silver). Gold values over .033 ounce/ton occur locally within mineralized zones. Only a small percentage of the known and interpreted extent of the shallow sandy limestone zinc-silver host has been explored by RC and diamond drilling.

Significant zinc and silver assays previously reported by Cypress from the Gunman project include:

Other significant zinc and silver assays previously reported by Cypress from the Gunman project include:

Don Huston, President of Cypress previously commented: “The Gunman project is a high-quality asset in Cypress’ portfolio with significant upside exploration potential. Three RC drill programs totaling approx. 38,000 feet have been completed by the Company on the project with significant grades between 5% to 33% zinc and 0.5 to 15.0 oz per ton silver over considerable widths encountered. There is a bullish outlook for the zinc market due to ongoing demand growth and an impending supply shortage coincident with the closures of numerous major mines globally. More than 2 million tons of required new zinc supply is forecasted by 2016 yet there are very few new zinc mines in the development pipeline. We believe there will be strong upward pressure on the price of the commodity and the high grade, shallow Gunman zinc-silver project offers Cypress and its shareholders leveraged exposure to this potential price increase.”

A recompilation of all previous historic data on the Gunman project is currently underway.