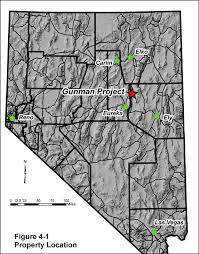 Cypress Development Corp has contracted to New Frontier Drilling of Fallon, Nevada, to complete approximately 3000 feet of RC drilling in a Phase 1 program on the Gunman project.

President Don Huston stated: “it’s time for Cypress Development to become proactive at the Company’s Gunman zinc-silver oxide project in northeast Nevada. There is a bullish outlook for the zinc market with the tightening of zinc mine supply world wide, illustrated by a global zinc metal deficit in 2013 for the first time in five years. Cypress believes it has a great opportunity to duplicate the RH zinc-silver rich zone discovered at the Gunman project in 2000 with extended drilling in 2014 to the RH North Zone “

A surface sampling program has also been initiated on the newly staked adjacent ground which forms the northern extension of the Gunman property. The Company’s senior geologist, Mr. Robert Marvin, has mobilized to the Gunman project and has established an exploration grid to facilitate the systematic sampling of rock exposure on the north of the property.

Cypress will continue in its exploration efforts to delineate the RH North target area with the potential establishment of a mineralized zone similar to the existing high grade RH zinc-silver oxide discovery zone located approximately 1500 feet to the south in the middle of the property.

Mineralization at the Gunman project appears to be controlled by a series of well developed NNE trending fracture zones. This setting is seen in other locations along the Carlin and the Battle Mountain gold trends where the NS to NNE alignments of mineralized zones are located in cross cutting structural zones within or adjacent to the main NNW striking trends. The mineralization of the zinc-silver zones on the Gunman is located close to surface. The very high grade of zinc-silver mineralization seen in the RH zone is a compelling reason to continue exploration on the Gunman project.

Past surface sampling and drilling by Cypress on the Gunman property has resulted in the discovery of a series of zones of zinc-silver mineralization over a strike length of 2500 feet. The northern most mineralization known (hole GD-15) on the property was discovered at the end of the most recent drill program in 2007 and this mineralization remains essentially unexplored.