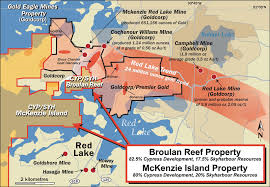 The Company is processing all data from previous work programs on its Mackenzie Island property with the intent of developing drill targets for the 2015 exploration season.Cypress has contracted to have all of its property boundaries surveyed with a Global Positioning System at this time.

The Mackenzie Island property abuts the Goldcorp Cochenour / Bruce Channel Gold Mine on its west boundary. It is anticipated that Goldcorp will begin production on its newly retooled Cochenour Mine project in the summer of 2015. The Bruce Channel gold deposit was purchased by Goldcorp in 2008 when it acquired Gold Eagle Mines in a transaction valued at $1.5 billion.

Gold Eagle had previously filed a NI 43-101 Technical Report title “Gold Mineralization Found in the Bruce Channel Zone and in the Western Discovery Zone, Gold Eagle Mine Property, Red Lake, Ontario” dated October 27, 2006 and prepared by William J. Lewis, B. Sc., P. Geo. The Western Discovery Zone lies immediately east and on strike of Cypress’ McKenzie Island property and has an inferred resource estimate of 309,000 tonnes at 16.67 grams per tonne gold for 165,700 contained ounces. The known mineralization within the Western Discovery Zone is dominantly in a near-horizontal sheet geometry so exploration for the extension of that mineralized zone onto Cypress’ claim would appear to be doable. Cypress intends to further explore the possible extension of this encouraging gold target onto the Company’s ground.

Cypress has compiled data available on the north side of the Dome Stock and it is evident that a major geological contact exists between the greenstone host volcanics and the intrusive. This contact stretches three kilometers east to west across Mackenzie Island in the middle of Cypress’ claim group.

The Company is in the planning stage for an exploration program for the summer of 2015.

Cypress Development Corp. is a diversified precious and base metals exploration and development company with properties in Red Lake, Ontario, Canada, and in Nevada, U.S.A.