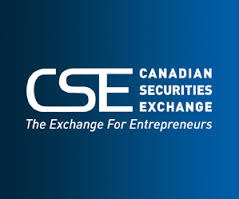 The Canadian Securities Exchange is pleased to announce the achievement of a number of important milestones during the third quarter of 2014.

“The accelerating expansion we see on all fronts illustrates clearly that entrepreneurs looking to tap the public markets for growth capital are increasingly aware of the advantages offered by the Canadian Securities Exchange,” said CSE Chief Executive Officer Richard Carleton. “Our streamlined compliance process, low listing costs and issuer support initiatives are proving the right fit for more and more businesses in an environment where cost of capital is more paramount to the success of small-cap companies than ever before.”

“Trading volume at record levels and issuers finding receptive audiences for financing efforts shows that a growing number of investors, both individuals and institutions, are coming to appreciate the opportunities to deploy capital available on the CSE,” said James Black, Vice President, Listings Development. “Our services are attracting early stage businesses as well as companies that are already established in their respective industries. The exchange will continue to grow alongside its listed companies as they achieve success in their own businesses.”

The CSE has welcomed a record 60 new listed companies year-to-date. With a large number of applications in hand from prospective issuers, the CSE will continue to build on this record number for the remainder of the year.

About the Canadian Securities Exchange:

The Canadian Securities Exchange is the only exchange providing trading and market information services for all securities listed in Canada. Recognized as an exchange by the Ontario Securities Commission in 2004, the CSE is designed to facilitate the capital formation process for public companies through a streamlined approach to company regulation that emphasizes disclosure and the provision of efficient secondary market trading services for investors. The exchange is home to more than 250 issues covering a broad range of industry sectors.