After raising C$2.3M @ C$0.06 (including a half 10c 2y warrant) in July of this year, Tectonic Metals (TSX.V:TECT) (OTCQB:TETOF) (FSE:T15B) recently received so much interest after CEO Tony Reda has been doing the rounds at conferences and roadshows, helped by Quinton Hennigh of Crescat Capital who has quite a bit of clout, that the company announced another financing on October 27, 2022. This time it is a C$2M non-brokered private placement at a price of 8c per share, plus a full warrant exercisable at 12c. Whereas the last financing fell a bit short on expectations due to extremely adverse market conditions, this raise comes as something of a surprise, and shows the level of support from Crescat Capital, with their technical head Quinton Hennigh clearly focusing on the potential of the fairly recently acquired Flat Gold Project.

Against a backdrop of deteriorating economic metrics worldwide, raging inflation, a Fed remaining on course to hike to 4.5-5% rates, shortages everywhere and Russia not exactly looking for peace in the Ukraine “special operation”, this C$2M raise is nothing short of remarkable.

After completing the drilling program conducted at Seventymile last summer with decent results to show for it, Tectonic announced the commencement of metallurgical testing at their very interesting (and Quinton Hennigh’s favorite) Flat Gold Project that follows up on historic work suggesting gold at this property could very well be free milling which implies a more cost-effective mineral extraction process. Historic metallurgical work indicates an oxidized profile up to 200m depth (drilling didn’t go deeper and the average drill depth for the project is 100m), and the same 1990 report reports that the ore is not refractory. According to management, the significance of metallurgical work to unlocking the potential of Flat cannot be understated. The historic met work was very limited and tested only one location, but, even so, it already pointed towards oxidized ore, and the current met work will be much more thorough. More on this program later.

It was good to see the company working the markets around the recently announced financing, and this generated quite a bit of enthusiasm over the last few weeks: 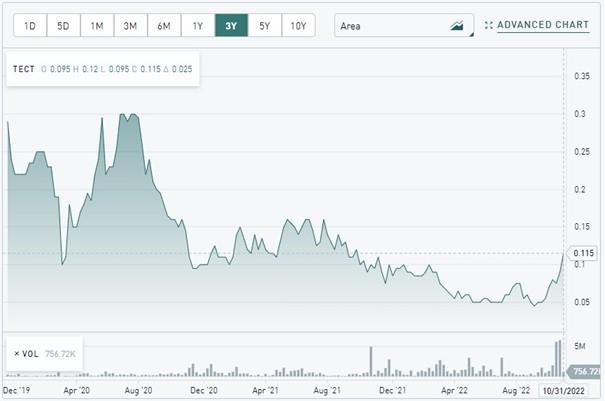 The share price and volumes increased significantly, providing Tectonic with a more fitting market cap of C$23M. After talking to CEO Tony Reda, the timeline for Tectonic consists predominantly of completing the metallurgical test work in the coming 2 months,  analyzing historic core, trenching, drill targeting, and commencing building an exploration camp in January-March. Drilling will likely commence when the winter subsides in April, making life much more convenient and cost-efficient. He also added: “Though Flat is remote by any standards, one of its attractions is its accessibility and existing infrastructure which includes a 4,100’ airstrip that can accommodate a C-130 Hercules and its 48,000lbs payload, roads leading to the mineralized zones that may be traversed by a Ford F-150 and structures in the town of Flat which have some potential for being repurposed for future accommodation with some renovation work. This infrastructure reduces the need to rely so heavily on costly helicopter-supported drilling as many of the mineralized zones may be accessed via solid roads and trails. This existing infrastructure footprint is a testament to the longstanding mining activity in the area that dates back over a century. “

The money for the current raise is predominantly meant for drill preparation and drilling itself will require another raise somewhere in Q1, 2023. I wondered why Crescat Capital came in at this moment, as I assumed they were so enthusiastic they wanted to drill straightaway. When I approached Quinton Hennigh about this, he answered:

“We funded them now, because they have a lot of work they can do over the winter.  This includes re-assaying historic core to get it up to compliance.  Metallurgical work is critical.  And this funding should allow them to put deposits down for the program next summer.  And it was cheap.”

This makes sense, as Tectonic likely has to make reservations for drill rigs, as these are very hard to come by these days. As the potential for Flat is huge as I point out below, the potential upside for this stock could easily be a ten-bagger, as Yukon darling (and another Crescat/Hennigh favorite) Snowline Gold (SGD.CSE) already boasts a market cap of C$362.66M based on very global back-of-the-envelope guesstimates of 10Moz Au based on just 10 excellent holes with thick, relatively continuous intersections. Flat is much more spread out but the sheer dimensions and sampling results indicate large-scale potential.

As a reminder, the Flat Gold Project is fully owned by Tectonic Metals, and is located 40km north and in the same mineral belt as the 39Moz @ 2.24g/t Au Donlin Gold Project, jointly owned and operated by Barrick and Novagold, who are spending $60M at Donlin this year. Flat is a 92,000-acre district-scale intrusion-hosted gold system with multi-million-ounce potential in the heart of Alaska’s fourth most prolific placer mining district. The property has also produced 1.4Moz of placer gold historically.

The priority target, Chicken Mountain, hosts a robust 4km long gold-in-soil anomaly where all 55 drill holes hit gold mineralization to an average drill depth of only 100 metres vertical; mineralization remains open along strike and at depth.  According to historical published reports, Chicken Mountain is the likely source of the majority of the aforementioned historic 1.4Moz of placer gold mined in the area.  Historic drilling from 1997 in55 holes all intercepted mineralization, and returned pretty interesting highlights like 12.5g/t Au over 24.7m, 1.36g/t Au over 36.6m and 1.28g/t Au 31.7m with many intercepts starting from surface.

According to CEO Tony Reda, the placer production and the high-grade results were an important reason for Quinton Hennigh to develop significant interest in Flat. Other reasons were of course the huge size of the anomaly, the oxidized near surface open pit potential, and the infrastructure. He likes the Golden Apex target as well, and wonders what the source is for the placer gold, where the next Fort Knox could be. I asked Quinton if he had other reasons to believe in the potential of Flat, and this is what he answered:

“I think Flat looks like a very robust reduced intrusion type gold deposit.  All historic holes hit significant gold. The broad expression of alluvial gold is a characteristic as it is at Ft Knox. I think the project could easily host +10Moz at 1-2 gpt Au. Metallurgy should be good, and that is being tested right now.”

I quizzed Quinton a bit further on met work, as 1-2g/t Au open pit grades usually are economic on standard recoveries, and drill programs typically don’t need extensive met work before drill targeting. This time Tectonic is searching for oxidized ore so it automatically becomes more important. According to Quinton:

“Metallurgy is critical here!  This is very remote.  It is near Donlin Creek, and that deposit still sits there mainly due to metallurgy.  Donlin is refractory, so it will be capital intensive and high cost to extract.  I expect capex to easily be $4-5B and AISC to be $1300-1500/oz.

Flat is a Tintina type intrusion related system.  IF the metallurgy is favorable like Ft Knox or Eagle, then resulting capex should be modest, perhaps $0.7-1B and AISC of $1000-1200/oz. If it is refractory, then there is a problem. I do not think it will be, but the test work is needed for proof.

In short, metallurgy is critical, especially when chasing deposits in the middle of nowhere like this. Why spend money if the deposit cannot deliver the goods?”

This makes more sense, as the refractory potential needs to be ruled out for sure. Oxidized deposits give Tectonic much more margin for solid economics, as a 0.5-0.6g/t heap leach grade is already economic, with much lower capex to go with that, not needing huge deposits for economies of scale as well.

I already looked into doing a very global resource estimate myself, and it is one of the reasons I like Tectonic Metals as an investment. When extrapolating very generally to a back-of-the-envelope mineralized envelope, potential is there for a 1500x200x30x2.75t/m3 = 25Mt target, containing an estimated 800koz Au at an assumed 1g/t Au. And this is just assuming a g*m number of 30 on average.

When looking at the sampling map, the actual underlying target is much bigger, to the tune of a very globally estimated 4000×700 (on average) x30x2.75t/m3 = 230Mt, so you can do your own math on this if Tectonic gets lucky, and Hennigh would be right. As always before getting too euphoric, just sampling results, even combined with favorable geophysics mean not that much, as drill results often fail to prove up economic mineralization, but in this case the sampling results combined with historic drilling is pointing towards the right direction for sure. The aforementioned Golden Apex, which has seen two historic drill holes that never reached their target drill depth, also appears promising and may be another Chicken Mountain according to management. Of course, the exact drill targets for the next drill program aren’t defined yet but will be disclosed in due time in Q1, 2023.

The recently announced non-brokered raise will enable Tectonic to drill their new flagship Flat Gold Project soon, after the metallurgical test work program, and a boots-on-the-ground prospecting and trenching campaign have been completed.  Management expects to commence drilling around March/April of next year, and I am sure this will be one of the most anticipated and closely followed drill programs in the junior mining sector. Will CEO Tony Reda and other Kaminak greats hit another Valley (Snowline Gold flagship) as Crescat Capital advisor Quinton Hennigh is hoping for? I would settle for much less but who knows, completed drilling and sampling indicate something very substantial. Stay tuned!

I hope you will find this article interesting and useful, and will have further interest in my upcoming articles on mining. To never miss a thing, please subscribe to my free newsletter at www.criticalinvestor.eu, in order to get an email notice of my new articles soon after they are published.

The author is not a registered investment advisor, and currently has a position in this stock. Tectonic Metals is a sponsoring company. All facts are to be checked by the reader. For more information go to www.tectonicmetals.com and read the company’s profile and official documents on www.sedar.com, also for important risk disclosures. This article is provided for information purposes only, and is not intended to be investment advice of any kind, and all readers are encouraged to do their own due diligence, and talk to their own licensed investment advisors prior to making any investment decisions. 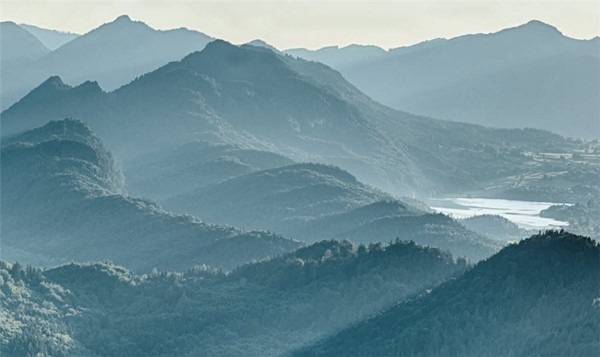