After doing the pretty interesting interview with my Dutch fellow countryman Kees Dekker, it is time to show several examples of his analyst reports. The first one is a critical analysis of a new junior gold producer, Atlantic Gold Corporation. This company was actually one of my favorite holdings for a long time, despite this I no longer have it in my portfolio as I view it to be fair valued since Q2, 2018. The basis for this article is an analysis privately made by Kees, and after I got to read this report it seemed interesting to me to contact Atlantic Gold management, in order to see if they would be so cooperating to provide constructive feedback.

Fortunately they did, and the result is an analysis with several rounds of feedback by both Atlantic and Kees. Yours truly also added several questions, opinions (sometimes differing from Kees and/or Atlantic as we all have different views) and remarks here and there, as I love doing this anyway, but also in an attempt to provide more reference, and get things more clear for myself and the audience. As the combined analysis with feedback resulted in a 45 page article, my syndication websites deemed it much too long for publication, so I decided to have it syndicated by providing just the executive summary with feedback. The full-length article including feedback can be found soon on my own website www.criticalinvestor.eu.

All presented charts are provided by Kees Dekker, unless stated otherwise.

Atlantic Gold Corporation (TSX-V:AGB) is a Canadian gold mining company, which has a number of projects in Nova Scotia, Canada, together referred to as the Moose River project.  After acquiring in August 2014 the first two of these projects, Touquoy and Cochrane Hill, it rapidly proceeded to acquire two more projects, Beaver Dam and Fifteen Mile Stream, close to Touquoy.  The combined projects had sufficient critical mass to be developed to a mine and construction at Touquoy was given the go-ahead mid 2016.   Commercial production was reached on 1 March 2018, which was within budget and on time.

The market has greatly rewarded Atlantic Gold’s performance by five-folding the share price since February 2016.

This study has had great problems with reviewing the business plan to determine whether the share price performance and current capitalisation are properly underpinned by the intrinsic values of the projects.  The 2018 technical report, which purports to substantiate the merits of the Moose River project, is basically a cobbling together of two reports.

Atlantic Gold commentary: This is not correct. The recent report published in 2018 supports the disclosure of new Mineral Resources and Mineral Reserves at Fifteen Mile Stream and Cochrane Hill underpinned by new drilling, resource models, metallurgical testwork, operating costs, pit designs, plant design, and all other modifying factors that must be considered when assessing economic viability.

The first study, completed in 2015, is about production starting from Touquoy and the adjacent Beaver Dam deposits (referred to as Phase 1).  The other part of the report deals with production from 2021 onwards from Fifteen Mile Stream, followed by Cochrane Hill (referred to as Phase 2 Expansion).  The cobbling-together approach to the combined study report is evident from Phase 1 parameters not having been updated, even including the forecast capital expenditure in 2016 and 2017.

Atlantic Gold commentary: We stated in the technical report that we would update the numbers once we had 12 months operating data.

Response KD: I am confident that you fully adhered to NI.43-101 regulations, otherwise you would not have been allowed to published. However, if the purpose of technical reports is to fully inform the reader, one should include a lot more.The limitations of NI 43-101 requirements are for example evident by the gross majority of producers being able to consistently publishing “reserves” yet rarely able to pay dividends. Basically the mines/projects at best sustain themselves most of the time. Often shareholders need to chip in to keep the companies afloat.

TCI commentary: I have to admit that actual capex could have been updated in this combined report, with opex pending for the first full year of production. Using one quarter of opex figures of a ramping up mine was not helping anyone in my view, so it made sense to wait for a full first year of production data.

The review of the report raises a number of concerns, such as: 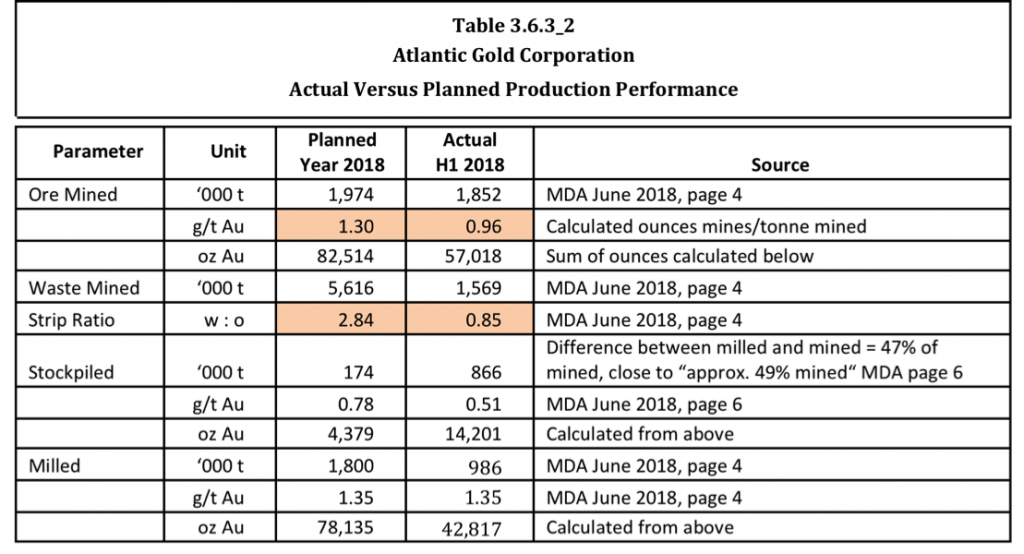 Atlantic Gold commentary: The lower grade in H1 2018 was due to the mine having to modify its working sequence because of the removal of historic tailings that required removal procedures to be approved by the provincial regulators.

Response KD: The explanation by Atlantic Gold management that the lower grade was due to the mine having to modify the working sequence, because of the removal of historic tailings does not explain the lower grade, at best the fact that equipment had to be used for tailings removal and not available for mining or and waste and the lower the planned strip ratio.

TCI Commentary: The company tried to explain this in the MD&A of Q2 2018:

“During the first half of 2018, a total of 1,852,353 tonnes of ore were mined, at a waste to ore ratio of 0.85:1 with a total of 3,421,473 tonnes of material moved. Approximately 49% of the ore mined in the first half of 2018 was stockpiled as low and medium-grade material which will be readily available for processing later in the mine life. This material was assumed to be waste in the 2015 Feasibility Study. Waste material was used to build the Tailings Management Facility (“TMF”) and the waste dump with its ditches and water collection area.”

Wrongly assuming waste to this degree is worrying in my view. The chances of mis-categorizing ore as waste and vice versa seem significant when using the uncapped high-grades with a large search radius to influence neighbouring block grades. These high grades have a nugget component of 80% of the grade. Therefore the risks of much lower average grade than forecast are real, and I am really wondering if they can mine as selectively as they say.

Response KD: How can moving tailings have anything to do with the grade of ore mined?  Refer to the table above; noticeable is that they have mined much less waste than planned, probably to be able to hit ore mining harder (twice planned rate!) to get sufficient higher grade blocks to achieve planned mill grade.  This points to them having grade trouble, I have no doubt about that.

Atlantic Gold commentary: It should be noted that the 2015 FS did not include a stockpiling strategy, which was developed in 2017 to consider both pit discard and economic cut-off grades based on known costs. Grade control drilling on a 5 m x 5 m pattern is used for ore/waste definition not the resource model. For the year to date grade control model to mill reconciliation is within 1%. Reconciliation is done to bullion. On selectively, the author offers an opinion not facts.

Atlantic Gold commentary: Comparing the mining costs at Detour with Moose River is like comparing apples with pineapples. Detour is by no stretch of the imagination a simpler operation despite the higher mining rate. Also, Detour has higher fuel costs, longer haulage distance and much higher labour costs due to the FIFO nature of their operations. Mining costs at MRC are well-known since Atlantic has the benefit of more than two years of operating data.  Mining cost/t is a bit lower than the PFS, G&A/Processing is a bit higher due to above expected maintenance, but the company is actively working on a large number of tweaks and improvements. The Feasibility study has $9.00 to $10.00/tonne processing cost. We expect the costs to vary between $10.00 and $12.15 depending on the maintenance required. Higher costs are mostly on maintenance while we make tweaks to the crushing circuit and also labour costs because we are building capacity and capabilities for the other projects. 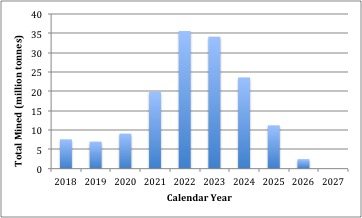 The planned expansion is for tripling of plant throughput. 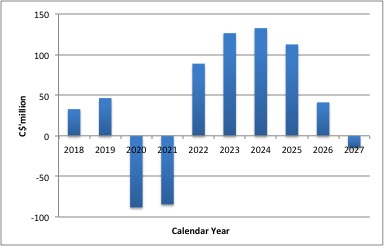 The above graph shows that the company’s financial performance is totally dominated by having to ensure it has the required funding to develop first Fifteen Mile Stream and a year later Cochrane Hill.  Once constructed the Moose Rover project has five years life left should it not be very successful in identifying additional reserves.

At the share price of C$1.59 on 3 October Atlantic Gold has a market capitalisation of C$376 million.  When accounting for dilution and net current assets, but ignoring the effect of loan servicing because the cash flow model has accounted for this, an Enterprise Value of C$370 million (US$287 million) is derived.  This is almost 40% higher than the net present value of the cash flow model, which is C$266 million for a discount rate of 7.5%.  This value was derived assuming that the very low operating cost rates proposed by Atlantic Gold are valid.

In conclusion, this valuation points to Atlantic Gold being heavily overvalued, irrespective of the many concerns.  Overvaluation of producing companies is a feature of the equity markets.  That is why this report emphasises not the overvaluation, but the concerns about the business plan which could mean that the calculated value of C$266 million, based on the inputs of Atlantic Gold, is far too high.