The Corona virus pandemic together with the Saudi Arabia-Russia oil production increase took its toll on the equity markets the last few weeks. The commodity markets in particular got hit too, as main end user China got hit by a halt in manufacturing plants across the economy. Precious metals like gold rose initially, but after the virus spread globally it got sold off ruthlessly like any other asset class. Golden Arrow Resources (GRG.V, GARWF.US, G6A.FSE) as a gold explorer didn’t come out completely unharmed either, as the following chart shows:

The drop in the share price for Golden Arrow is relatively comparable to that of SSR Mining, the company Golden Arrow holds roughly 1M shares of (and which are the bulk of tangible assets at the moment):

At a current market capitalization of just C$14.3M, Golden Arrow trades below the value of their SSR Mining holding, which attributes to C$16.2M. Besides this, Golden Arrow has a modest cash position and their exploration assets among which the promising Indiana gold project in Chile, so it is safe to say that the company has reached decent support levels technically and fundamentally speaking. Management decided this was the case as well, and came to the conclusion that it was probably easier to buy back shares in order to create accretive value for shareholders instead of trying to create value through the drill bit on their projects.

For that purpose, management announced a normal course issuer bid on March 12, 2020, to purchase up to 10,658,050 shares being equal to 10% of the float. This bid commenced on March 17, 2020 and will end on the earlier of March 16, 2021. The shares will be bought in the open market by PI Financial on behalf of Golden Arrow Resources. Management and the Board clearly think this will be advantageous for shareholders, as they commented as follows:

“The board of directors of the company are of the opinion that the recent market prices of its shares do not reflect the underlying value of its property portfolio and its strong financial position. Accordingly, the purchase of shares through the bid is in the best interests of the company and its shareholders, as it will increase the proportionate share interest of remaining shareholders. The bid will afford an increased degree of liquidity to the company’s shareholders. The directors also believe that there will be long term benefits to the company with fewer shares issued and outstanding.”

This news release was followed a few days later on March 16, 2020 by a statement of the President, Chairman and CEO Joseph Grosso, of which a few highlights are presented here:

“I believe that today’s market sentiment has resulted in a share price that does not reflect the Company’s asset value, or our future potential value. At this time, our asset value includes:

In addition, our potential value includes:

I believe that the current market is creating the significant disparity seen between the share price and the combination of our asset value and exploration potential. This has created the opportunity for management to initiate an economical buyback of up to 10% of the public float of our shares, as approved by the TSX Venture Exchange. This will benefit the shareholders by increasing their proportionate share interest, increasing liquidity provide long-term benefits afforded by a tighter structure.”

After reading this, I wasn’t immediately convinced if this was the best possible action for a junior explorer with a lot of current assets to its disposal, in a bear market. I have several reasons for this.

Notwithstanding this, because of the current rout for oil companies, even the likes of Shell have halted their share buy back programs to save cash now, for harsh times to come. So, why Golden Arrow management decided to initiate a buy back program at a point where its SSR Mining shares are valued at about 40% lower levels compared to the highs of a few weeks ago, whereas Golden Arrow lost just 33% and already recovered towards a 20% loss from the share price right before the outbreak (probably caused partially by the buyback program itself), wasn’t really clear to me. If 10% of the float will be bought at an average price of 13c, this means C$1.38M of precious cash will be gone. Therefore I asked them for more clarity on the subject.

Joseph Grosso commented himself as followed: “Golden Arrow has been trading at a discount to not only value, but to its cash (and cash equivalent) ever since the sale of Puna Operations to SSR Mining. Many investors had purchased Golden Arrow’s shares as a production story; even though we were a fairly passive investor in that project. The recent general market sell-off has exacerbated the discount. I believe that by initiating the repurchase of up to 10% of the company’s public float, we can show to the market that we firmly stand behind the value underpinning Golden Arrow. Since the announcement of our buyback program, the company’s shares are up by 20%. By reducing some of the outstanding shares, Golden Arrow is in effect mopping up excess stock held by investors with different investment objectives, and increasing the inherent value held across all remaining shareholders. As the bull market in gold continues to advance this should provide great leverage to all of our investors.”

One could wonder if investors who were in it for the leveraged production play didn’t already leave, and the sell-off wasn’t connected to a higher degree to the broader market sell-off itself, but let’s see what happens. At least they are buying back at an absolute low, and the leverage is optimized.

In the meantime, Golden Arrow progressed on their ongoing exploration programs, and the one at the Flecha de Oro project in Argentina delivered the first sampling results at the Esperanza and Puzzle properties. Sampling and mapping continued throughout the month of January at the Esperanza property, identifying high-grade and visible gold hosted in epithermal quartz veins. Especially the results at Esperanza were encouraging in my view, as shown here in this table:

Everything topping 1g/t Au at surface is showing high potential in my view, so if about 40 of 500 samples show these results, the sampling program was successful in my opinion. Several samples also involved visible gold, as can be seen at these pictures (in green): 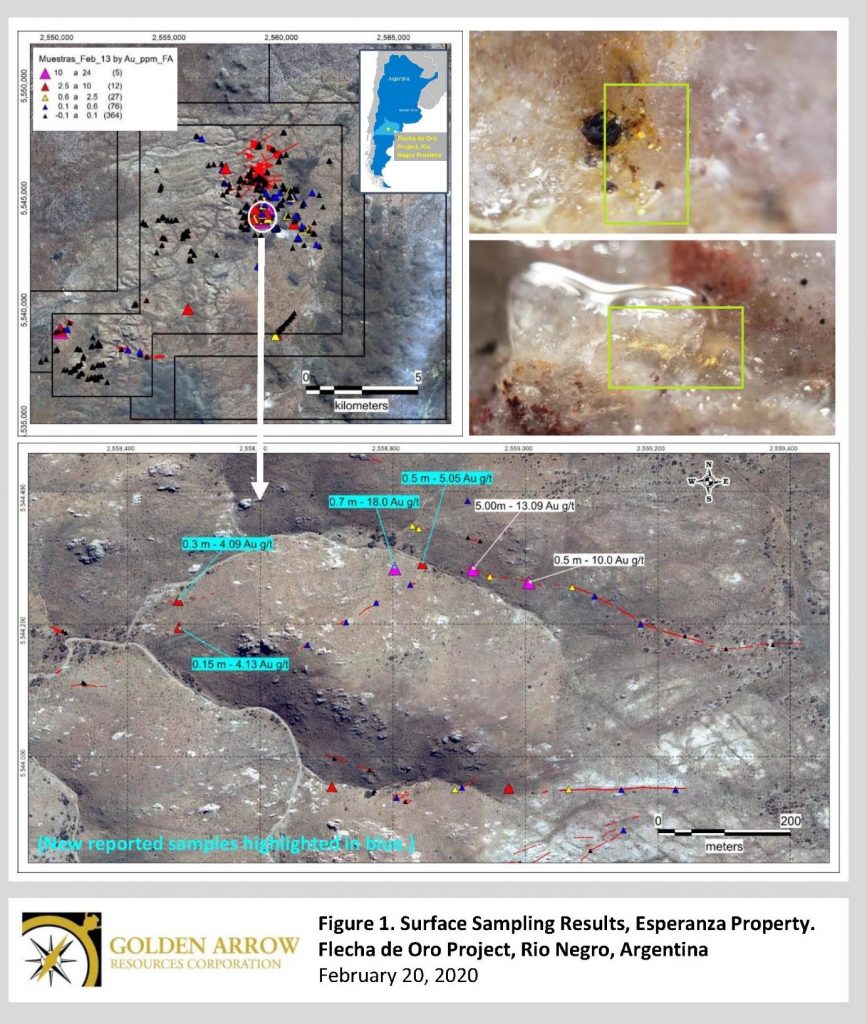 At Esperanza, Golden Arrow’s target is to define high grade mineralized zones within the 16 kilometers of identified quartz and chalcedony veins that display epithermal textures. The mapping program is continuing to gain greater understanding of the structural plumbing system and distribution of classic epithermal vein textures which can provide formation temperature information, which are both important in targeting thicker and higher-grade zones.

The company is using the Cerro Vanguardia district as an exploration model for the Esperanza property. There are geological similarities between the two areas, in particular the presence of swarms of low sulphidation epithermal quartz veins in an area of approximately 100 square kilometres. The Cerro Vanguardia district is located in Santa Cruz province in southern Argentina, and includes over 100 gold and silver-bearing epithermal veins. The district has a cumulative exposed vein strike extent of more than 240 kilometres, and has produced more than 4.5 million ounces of gold over the last 20 years.

Golden Arrow Resources also received sampling results for the Puzzle property, but these were, despite establishing a trend of 6.5km, of much lower grade, and therefore of lower interest/potential in my view, especially since it is not heap leachable potential:

The trend can be seen here: 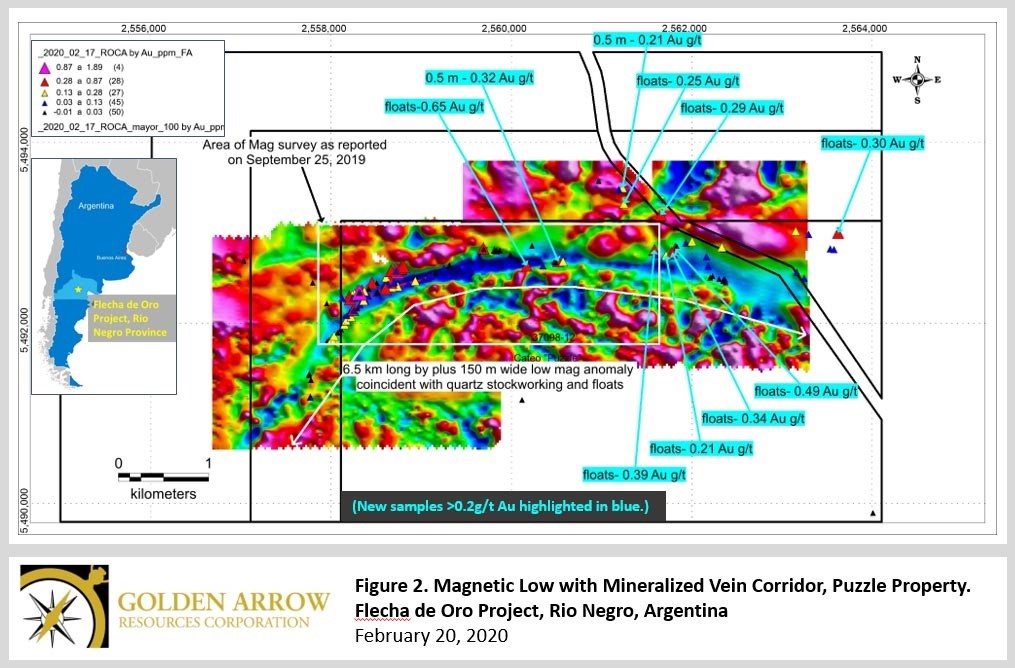 Despite these low grade sampling results at Puzzle, the company made applications for additional concessions around both the Esperanza and Puzzle properties.

I also wondered if the Corona pandemic had any influence on the ongoing exploration programs, and McEwen had this to say about this subject: “The Corona pandemic is a global phenomenon. Our first priority is the safety of our staff and personnel. Our organization is abiding by all the local regulations in every jurisdiction to keep our people safe. Although our exploration programs have been placed on a temporary holding pattern, we expect to pick up when this pandemic has passed us. We will provide updates, as appropriate.”

The share buyback program of 10% of the Golden Arrow Resources float came a bit as a surprise for me, as this is unusual for junior mining companies. After contacting Joseph Grosso, the reasoning became more clear, as they figured there were still investors with the objective of holding a (leveraged to silver) production play selling their shares, and they wanted to clean those up. The Corona virus seems to have a delaying impact on operations, according to Brian McEwen, as they paused their exploration programs in order to comply with all pandemic related regulations. It seems investors have to wait out the pandemic and its fall out, but in the mean time these share price levels trading below cash seem an interesting time to entry (or re-entry). 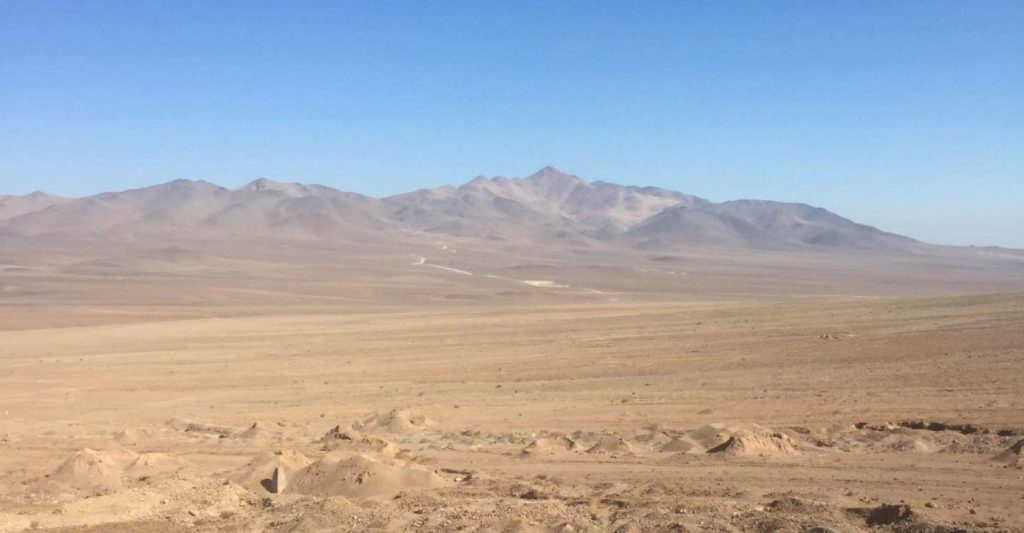