With copper beating all time highs recently, and gold briefly touching US$1900/oz, Meridian Mining (TSX-V: MNO) seems to be in a good place, delivering their second set of assays from their Cabaçal VMS Copper-Gold Project in Brazil. Their ongoing 10,000m field program of diamond drilling recently returned assays from hole CD-005 to CD-009, and all holes contained economic mineralization. This will probably not come as a surprise for the verification holes of historic drill results, but the good news is the stepout holes into the lesser drilled areas outside the limits of mine development sometimes returned even better results. The standout hole in this case is of course CD-009, producing no less than 66.1m @ 1.1% CuEq from 86.9m depth.

As management was targeting the Southern Copper Zone (SCZ) through CD-006 and CD-009 for high grade NW-SE trending alteration pipe hosting copper-gold-silver mineralization, which usually returns relatively short, high grade results, the long intercept of 1.1% CuEq came a bit as a surprise to them. The extremely positive outcome in CD-009 was the presence of not only the broad disseminated copper-gold mineralization but also discrete higher grade gold intervals (2.7m @ 14.0g/t Au, 1.5% Cu, 7.0g/t Ag, within the aforementioned broader zone of 66.1m @ 1.1% CuEq. These sorts of grades would have normally been targeted by the historical underground development, based on the 3g/t gold cut-off grade. The presence of such intersections indicates that high-grade gold trends remain open beyond the limits of mine development at the point of closure.

The drilling at the Eastern Copper Zone (ECZ) through CD-005, CD-007 and CD-008 targeted further near surface sulphide mineralization, and this played out perfectly, considering the results: 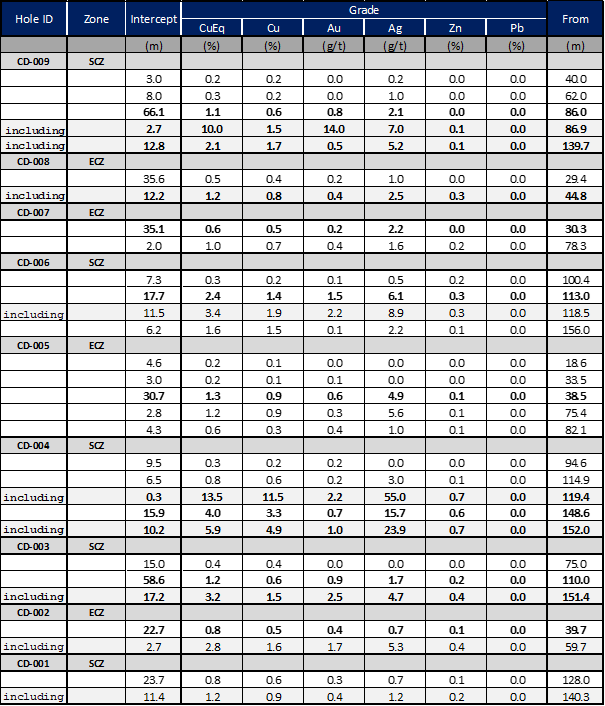 All intercepts are estimated to have a true width of 90% of intersection widths, which is even more impressive. On a sidenote, the company reported additional assays on holes CD-003 and CD-004 on May 5, 2021, adding some more high-grade mineralization, although not meaningful compared to the existing results.

The ongoing drilling campaign is designed to both infill and twin historic holes. The current batch of holes in the case of CD-006 and CD-009, the holes were drilled as part of a fan into the Southern Copper Zone, where highlights of past drilling include results of 13.4m @ 5.50% Cu, 1.31g/t Au, and 24.72g/t Ag. Holes CD005 – CD007 were drilled as a series of infill holes between historical results . Holes CD005-CD007-CD008 were designed to infill on section 240-NW, where the drilling becomes more widely spaced in the shallower up-dip portion of the deposit.

The drill collar locations are indicated on the map below: 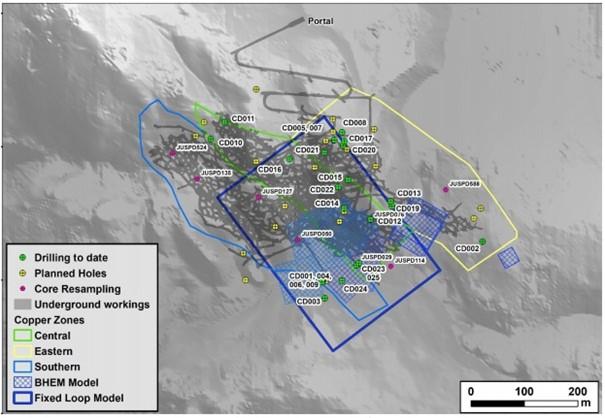 As can be seen, the most impressive holes CD-006 and CD-009 are drilled well beyond and south of the existing mine workings, which bodes well for an eventual resource expansion. These holes were drilled from the location of the historical drill pad of JUSPD 596. According to management, the last 12.8m of CD-009 graded over 2.0% CuEq before being terminated in a mining void, emphasizing again that the historical mining was not optimised for extraction of a copper equivalent cut-off grade. This hole will not be extended beyond the mining void for now.

I noticed drill collars labelled as high as CD024 being indicated on the map, and wondered which holes were already drilled, which are drilled now, and for which holes we could expect assays (and when the next batch). CEO Dr Adrian McArthur commented that holes up to CD021 have been received by the laboratory with the others being processed on site for dispatch. A steady stream of results will be reported over the weeks ahead. Holes already completed are all coded in green on the map, with some of the immediately planned holes are in yellow; drilling plans are constantly being reviewed as an ongoing survey program continues to locate and validate the position of the historical drill collars.

When looking at the complete table of drill results, it appeared that the results for CD-001/004/006/009 differed quite a bit although drilled from the same location, and I asked Dr McArthur for an explanation. Could this be faulting? He answered that these holes were drilled orthogonally into a SW plunging mineralisation package, which consists of a lower stringer breccia zone and upper disseminated (and locally stringer zones). These intervals can merge and diverge (typically of alteration and mineralization pathways in with variable permeability in the original volcano-sedimentary pile). CD009 (the more northern of the holes) enters a zone where the mineralisation is more contiguous.

The current presentation available on the company website contains further clarifying sections, as can be seen here: 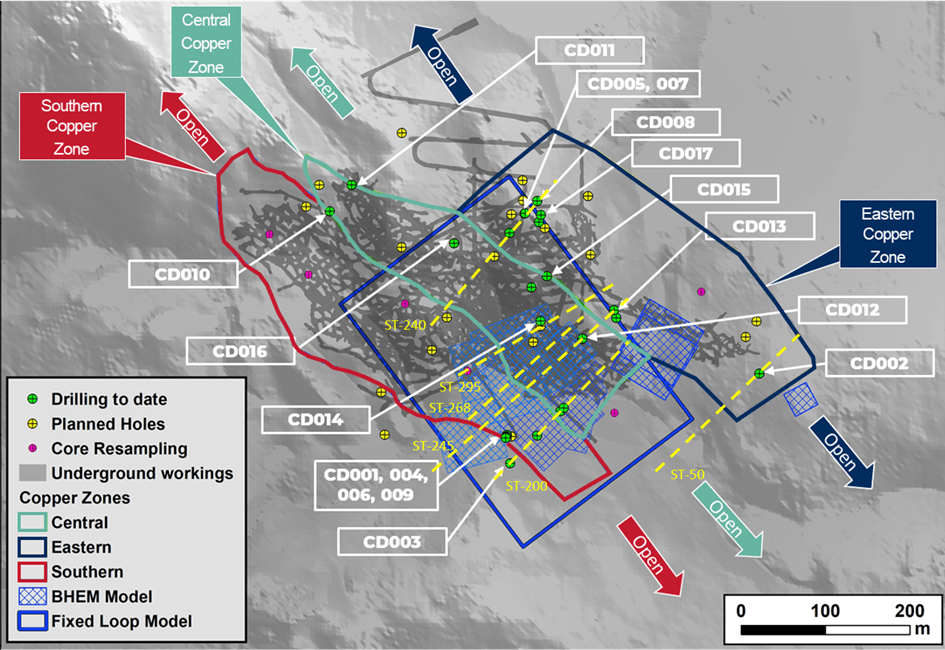 It will be clear there is some faulting going on, combined with the stratigraphic variations mentioned by McArthur. According to him, with the holes being orthogonal, the intersections span adjacent cross-sections. Significantly on section ST-240, the trends of modelled conductors from the bore-hole geophysical program are illustrated. Section ST-245 shows again that significant copper mineralization was undeveloped with in face hole JUSPD076 on the same section crossing a mining void with mineralization above and below.

As can be seen on this map but also the first one, several historic holes are being resampled, and I wondered why these were exactly resampled, and what the historic assay results were on them if this could be disclosed already. McArthur advised that the results are shortly to be released, providing comparison with the historical intervals and the new assays. Some results have already been partly reported, with hole JUSPD050 has been resampled already, and returned 16.8m @ 2.1% Cu, 2.0g/t Au, 3.0g/t Ag & 0.2% Zn from 123.3m. The resampling achieved higher copper/gold grades to the tune of about 30% gross metal value, so this was undoubtedly a positive. When looking at another resampled hole, JUSPD076 with a much lower average grade copper and no gold, the copper grades were exactly the same, and the low level silver couldn’t be detected, and is being reanalyzed at the moment.

As a reminder, the current drilling is part of the Cabacal Central 60-70 hole drill program for 8,000m, of which 30 holes are twinning holes, in order to verify the 21.7Mt historic resource estimate. A third drill rig is operational now, which will slightly increase the turn around time for drilling to assay results. The company also bought high-powered borehole EM equipment, which will increase the radius of detection from about 50m to about 150m. Equipment is currently under construction and is expected to be deployed in the field by mid-June. This scheduling is still up to date. According to McArthur we can expect results at least until the end of Q3:

“As we continue to focus the first 8,000m of our inaugural 10,000m drill and trenching program on the Cabaçal mine, we still have 2,000m budgeted to confirm the already defined near-mine and regional targets of our VMS camp. We expect that additional results will continue through the summer and autumn.”

As the high recoveries were discussed in my last article as well, I wondered when Meridian Mining would be doing new metallurgic test work, in order to verify these high recoveries from historic mining operations. McArthur answered that metallurgical work will be conducted in the third quarter to supplement the already extensive data from historical operational records. Any final requirements for geotechnical and metallurgical work can be expected to be conducted as part of the final feasibility studies.

The second batch of Cabaçal assays solidifies even further that Meridian is advancing a reliable historic resource into a NI43-101 compliant gem. The verification and infill holes confirm just as intended, or even better. The company has also identified a series of near mine geophysical and geochemical targets to target extensions for building markedly on the 21.7Mt historic resource. These targets may well lead to an expansion of the drilling program in order to define the ultimate limits of the mineralization envelope. I am very much looking forward to a PEA on this project, as an NPV8 could easily top US$300M at for example US$1600/oz gold and US$4/lb copper. It was a bit unfortunate to see the share price enduring some profit taking after the news came out, but I simply view this as a buying opportunity as I don’t think we will see these sub 70c levels much longer.

I hope you will find this article interesting and useful and will have further interest in my upcoming articles on mining. To never miss a thing, please subscribe to my free newsletter, in order to get an email notice of my new articles soon after they are published.

The author is not a registered investment advisor and has a long position in this stock. Meridian Mining is a sponsoring company. All facts are to be checked by the reader. For more information go to www.meridianmining.co and read the company’s profile and official documents on www.sedar.com, also for important risk disclosures. This article is provided for information purposes only and is not intended to be investment advice of any kind, and all readers are encouraged to do their own due diligence and talk to their own licensed investment advisors prior to making any investment decisions. 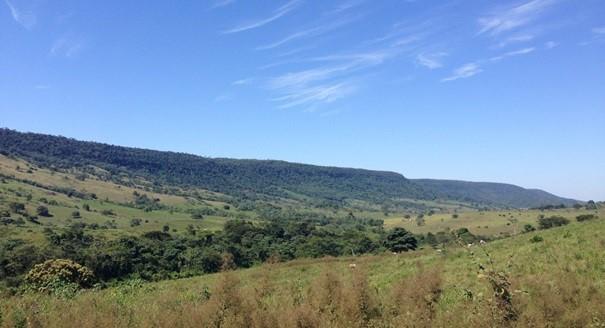