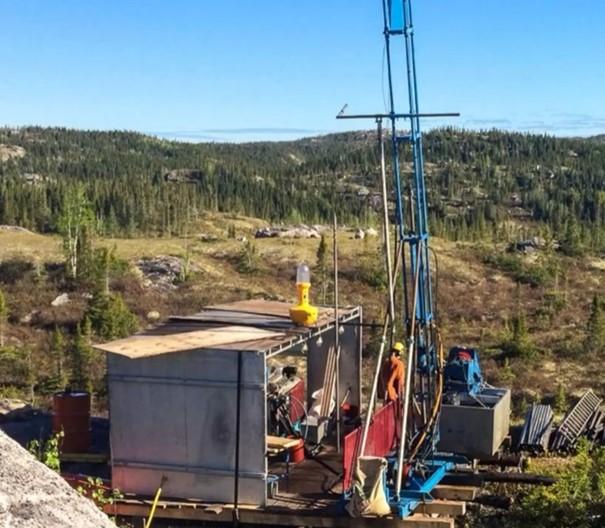 These holes were part of a completed 4,000m Phase II drill campaign, following a 3,587m Phase I drill program, which was highlighted by a 0.5m @ 55g/t Au intercept. Both programs are at a very early stage in Vior’s systematic exploration process of an extensive project with lots of targets still to be tested, so it is too soon to draw conclusions about mineralized potential yet, although I definitely hoped for more from Phase II drilling. As the company also requires additional funds to further their exploration efforts, some longtime committed shareholders like Osisko Mining Inc., as well as some Quebec based institutional funds that include, FSTQ, SIDEX, Desjardins Capital and SDBJ, were happy to support and provide fresh cash to the tune of C$1.134M, as announced on July 29, 2022.

The announced closing of C$509k was the second tranche of a non-brokered private placement. A first tranche of C$625k was closed on July 22, 2022, bringing the total at C$1.134M.  The share price was set at C$0.13 per share and a half warrant (C$0.21 for a period of 30 months). The warrant has a pretty quick accelerated expiry as well, activated when the share price is trading at or above C$0.35 for 10 consecutive trading days, making sure Vior receives another C$1M from these warrants shortly after things start moving.

A total of 4.8M shares were issued in the first tranche, taken up by FSTQ, SIDEX and Osisko Mining, bringing the total shareholdings of Osisko Mining to 7.8% of outstanding shares, and 11.26% on a partially diluted basis. The second tranche saw another 3.915M shares being issued, bringing the newly issued total at 8.715M shares and 4.37M warrants. In this second tranche, CEO Fedosiewich managed to pull in two more Quebec-based institutional funds, Desjardins Capital and SDBJ, on board for proceeds of C$307k, which is testament to his great financial network originating from his time as an investment banker.

With a resulting treasury of approximately C$2.55M, Vior is sufficiently capitalized to begin a third drill program at Belleterre. According to Fedosiewich, this third program will consist of a more substantial drill program beginning this Winter, once the data compilation and drill targeting process is completed.

Let’s have a look at the drill results of the Phase II program. For this program, 10 holes were completed, targeting the historic mine workings, which in turn predominantly revolved around mining the 12W vein structure. As a reminder, the Phase I drill program consisted of 5 holes (3,857m of drilling), and had one economic highlight of 0.5m @ 55g/t Au. The target areas for both programs can be seen in this map: 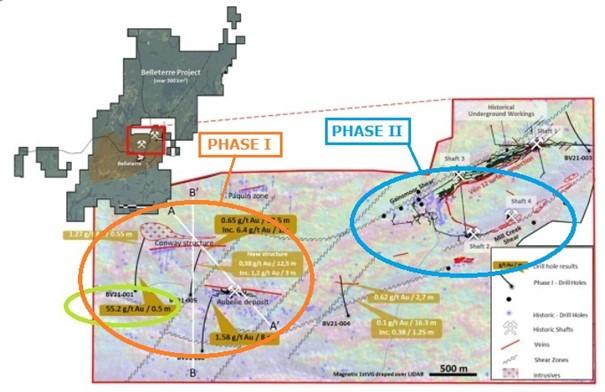 The Phase II program targeted select areas adjacent to the historic mine workings at Shaft 2 and Shaft 3 to better understand the structural controls on high-grade gold mineralization at Belleterre. The 12W deformation structure, located directly on-strike with Shaft 3, returned the strongest intercepts from multiple holes, including zones of 1.0 to 15.85m of quartz veining, shearing, and pervasive quartz flooding. Hole BV22-011 generated the highlight result, with 1.35m @ 12.87 g/t Au within a broader 15.85m@ 1.28 g/t Au intercept, meaning a residual grade of just 0.2g/t besides the high-grade highlight. I wondered why they included the low grade halo, as any underground mine plan cut-off probably excludes these values. Was this to include lower grade veins which could eventually point towards higher grade veins nearby?

EVP Eustache answered: “Yes, this is exactly right, as our geologists have  identified that the gold distribution on the 12W structure is concentrated on both sides of the deformation zone. In the BV22-011 intersection, we have been able to pinpoint geological continuity, which includes the high-grade intercept of 12.87 g/t Au, and is being interpreted as the hanging wall.

There is another intercept of 1m at 1.26 g/t Au on the other side of the 12W (or footwall), with traces of gold and quartz veining occurring in between the hanging wall and footwall. These recent results will allow us to better identify the gold distribution over the 12W structure, and we expect that grades as well as widths should improve in our future drill programs.

CEO Fedosiewich was pleased with the results of Phase I and II, as he stated:

“Belleterre was historically known as a high-grade narrow vein gold mine, however, our team is very encouraged by some thicker, shear-hosted style of mineralization observed in our first two drill programs, which is common across many greenstone belts in Ontario and Quebec. Phases I and II have confirmed the potential to expand historically mined veins along strike and at depth as well as to make new discoveries along several newly identified gold-bearing structures.”

Findings indicated a robust extension of the 12W structure according to management, with some veins showing visible gold. 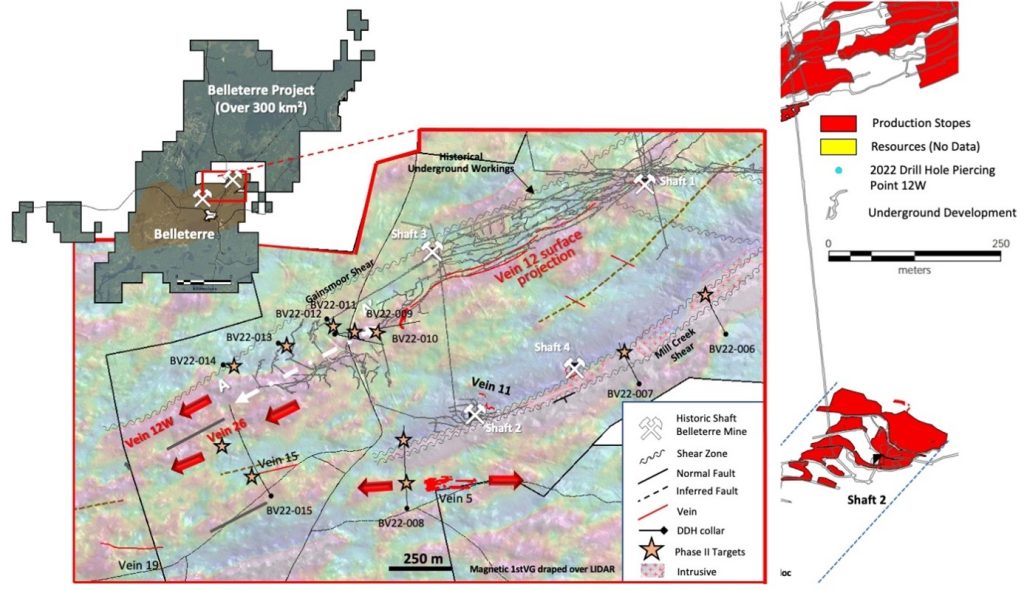 The 12W structure also remains open at depth and laterally, and most importantly gold mineralization appears to correlate with the intersection of a secondary NW-SE structural orientation also observed at the mine. This orientation could be a key structural control to the gold-bearing mineralization. 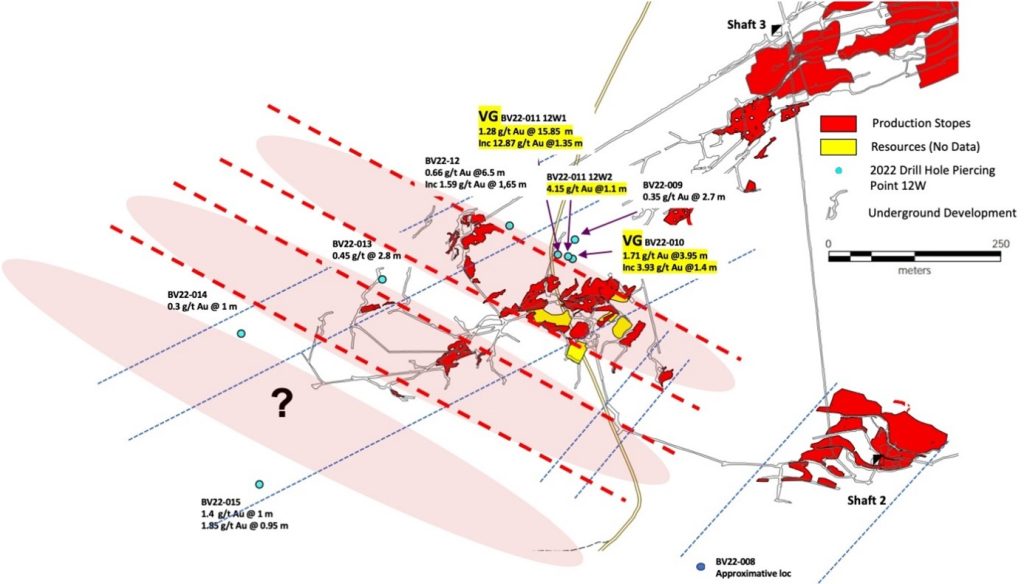 Of 15 holes drilled by Vior in Phases I & II, 10 holes returned prospective gold intercepts in strongly altered and mineralized quartz veins, indicating the discovery potential at the Belleterre camp according to company management.

Whereas Phase II focused more on the 12W structure, as a reminder, the objective of the Phase I program was to test the continuity of multiple gold-bearing veins at depth and better define the geological framework of the historic Belleterre mine trend to the west, which has seen limited historic drilling below -200 m. Drilling at depth has successfully intersected the down-dip projections of multiple historically mineralized vein structures, and other previously unrecognized gold-bearing quartz veins and structures. 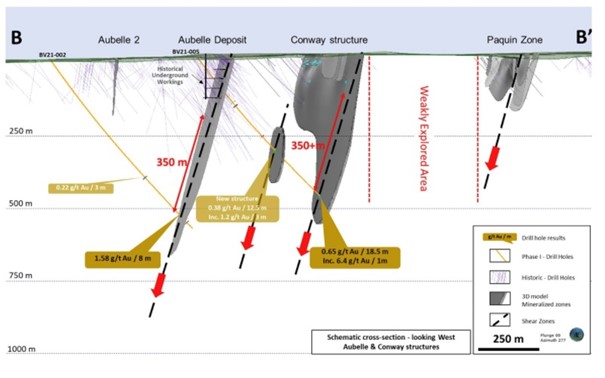 The highlights of Phase II can be observed in the tables below, with drilling at the 12W structure aimed less deep: 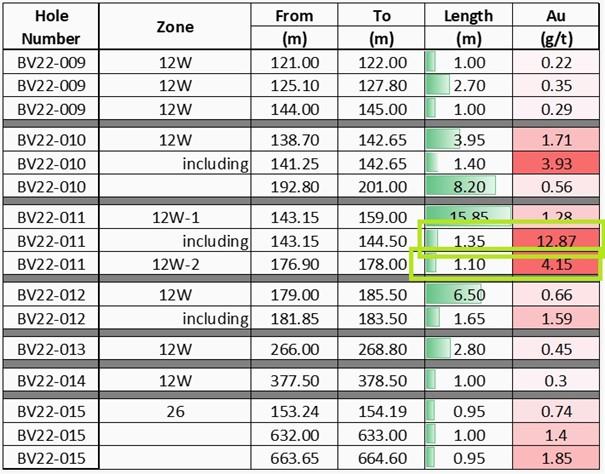 Drill holes BV21-006, 007 and 008 from Phase II did not intercept any noteworthy mineralization, however, according to EVP Laurent Eustache: “This is the nature of exploration, where most often you need to test various areas to better understand the geological gold potential and its distribution. Even in an advanced and proven mining camp like Belleterre, where high-grade gold has already been produced, sometimes gold is not easily discovered in the initial drill campaigns. It is very easy to miss a good intercept or deposit with just a few drill holes, as evidenced by many great discoveries made in the Abitibi that took many drill holes before the right structures were discovered.”

As a reminder, the Phase II drill program consisted of ten high-priority drill targets totaling over 4,000 meters and was focused on the former Belleterre mine concessions. The ten holes are further specified below:

Figure 2 can be seen here, showing the Phase II drill targets and their context: 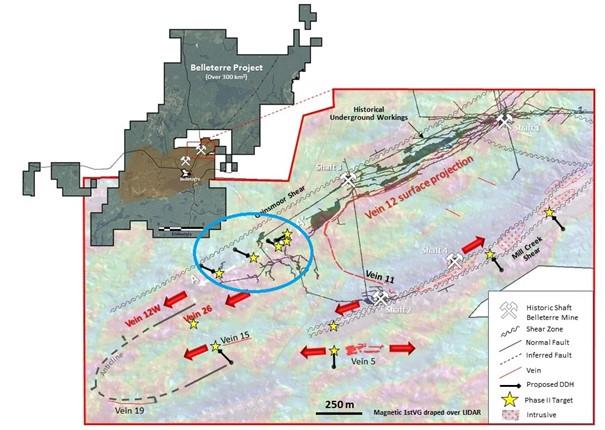 Investors probably had slightly higher hopes for the Phase II drilling at the 12W structure, as most of the mined-out mineralization was produced from this very vein in the past, and likely with gold left behind in the vein shoot. Besides this, lots of historical drilling intercepted narrow veins with high grade mineralization, with highlights like 20.6g/t Au, 58.1g/t Au and 65.8g/t Au, mostly within a 100m below the deepest mined out level, as shown in Figure 3 below, indicating historical high-grade mineralization in an updated 3D model: 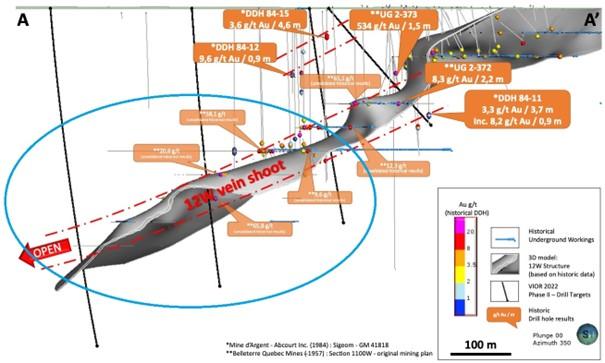 Myself and management got excited by the seemingly low risk exploration target at depth, but the drill bit seemed to have missed the historically indicated high grade veins for now. Of course it still is early days, and CEO Fedosiewich and EVP Eustache had this to explain regarding this subject: “We had higher expectations on some of the targeted drill holes, however, exploration and drill targeting is not an exact science. We have learned a lot from the geology of the results and hope to better vectorize with our drill targeting for the next drill program on the 12W structure. In addition, the results from Phase II on the 12W structure have demonstrated some locally robust grade including VG, width, gold continuity and a little more geological complexity than we expected, which are all ingredients that you want to see when working towards a new discovery.”

Regarding their second priority Skyfall project, Vior recently announced the acquisition of 24 claims covering 1,355ha adjacent to the project, for a consideration of 40k shares, and the company is still working on the geophysical data reprocessing, with a clear focus on Belleterre for the coming months.

The current cash position of Vior sits at approx. C$2.55M, and the company is cashed up at the moment. It is completing a summer field exploration program at Belleterre and will be planning the Phase III drill program, which will be announced once data compilation and drill targeting is completed this Fall.

It was good to see Vior raising another C$1.13M in a difficult market, as this enables them to plan a Phase III drill program at Belleterre. The latest batch of drill results didn’t exactly dominate the headlines, but at least it confirmed the extension of the 12W structure. As was the case with the Phase I results, the lower grade intercepts provided valuable vectoring information for Vior’s geologists to establish narrow vein structures, which typically pinch and swell, requiring lots of additional drilling to be delineated properly. I am looking forward to the drill targets of the upcoming Phase III program, and even more towards drill results of course. Stay tuned!

The author is not a registered investment advisor, and currently has a long position in this stock. Vior Inc. is a sponsoring company. All facts are to be checked by the reader. For more information go to www.vior.ca and read the company’s profile and official documents on www.sedar.com, also for important risk disclosures. This article is provided for information purposes only, and is not intended to be investment advice of any kind, and all readers are encouraged to do their own due diligence, and talk to their own licensed investment advisors prior to making any investment decisions.