After a year of slow progress for Avrupa Minerals (TSX-V:AVU) (OTC:AVPMF) and JV partner MATSA at the Sesmarias target, part of their flagship Alvalade project in Portugal, it is refreshing to see Avrupa somewhat diversifying away by acquiring four exploration properties in Finland, with some of them even having a historic resource. Since Finland has become something of a hotspot lately, with Aurion Resources (AU.V), Rupert Resources (RUP.V), Firefox Gold (FFOX.V) and Mawson Gold (MAW.TO) being in the news on and off the last few years, it could very well be possible for Avrupa to enjoy some free Finland enthusiasm from investors. On the other hand, more attention means more scrutiny, so it will be interesting to see when they will be able to raise cash, and start exploring.

Avrupa Minerals announced on December 20, 2021 the signing of a binding letter agreement with Akkerman Exploration BV, to acquire 100% ownership of Akkerman Finland OY (AFOY). This is nothing less than a Dutch company, and it is quite rare to see countrymen of mine engaging in trading mining properties, since The Netherlands does not have any active mine or mining projects anymore, and I only know a handful of Dutch players in the mining industry. But enough about my amazement. The acquisition handles 4 properties, 3 of them are base metal projects, located in the past-producing and highly prospective Vihanti-Pyhäsalmi VMS district in central Finland, where deposits have the same geological makeup as the ones found in the Iberian Pyrite Belt, where Avrupa has been exploring for many years now. The fourth project is a gold project in a greenstone-hosted shear zone, which is located along strike with the Oijärvi gold project, which Gold Line Resources acquired from Agnico Eagle for $10M, and has a historic (2013 so pretty recent) inferred resource of 250koz @ 4.11g/t Au and 1.9Moz @ 31.11g/t Ag. Maps of this project can be seen here (Source Gold Line Resources website): 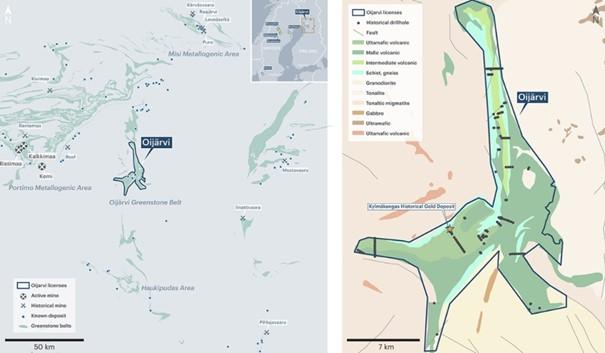 Gold Line Resources has set targets of >1Moz Au and >7Moz Ag, so there seems to be quite a bit of potential. As per their website:

“The main Kylmäkangas deposit hosts massive quartz-veins containing gold, silver and base metals along the mineralized shear zone, with gold anomalous sedimentary rocks present in the area.-  The geological structures of the area, along with the thick shear zones and high-grade intercepts and faults, characterize a deposit of potentially multimillion ounces.”

At a current share price of C$0.070, this means an acquisition price of C$210k in equity, C$175k in cash, and C$400k in exploration expenditures, so a total compensation of C$785k. For this amount it is Avrupa that will be the operator, although AFOY still has the deciding voice during the first stage of the earn-in to 49% ownership for Avrupa. Before we look into the properties, it is good to mention that the four projects need to be upgraded to licences first. For this, the company has until the end of January 2022 to decide upon what areas within the Kolima Project to extract for license application. The review and application process is already underway for Kolima, and the company expects to present the application to the Finnish mining bureau by mid-January.

License areas in the other three projects need to be defined later in 2022 and 2023. Once license areas are defined and the application process is underway, Avrupa will oversee detailed systematic data compilation and review, historic drill core review, basic surface geochemical exploration, and new drill targeting in preparation for drilling when the license applications are approved. According to CEO Paul Kuhn, this work will continue throughout 2022. Basic exploration in the project areas is permitted throughout the licensing process, and the company will take advantage of this allowance to better define priority areas of interest that can be upgraded to license applications.

I do know Finland has quite a reputation of being very thorough on permitting, with long turnaround times, so let’s hope this is not getting in the way of quick exploration.

This is an overview of the locations of the 4 properties: 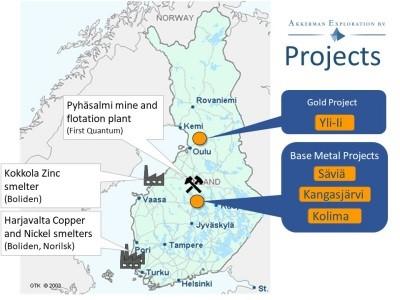 The first project is called the Pielavesi Reservation, and includes the Säviä target. The project covers about 213km2, contains a small historic resource, and has been drilled quite extensively at certain targets, although a number of these targets didn’t return economic mineralization. However, the property is very large and underexplored, and hasn’t seen any modern exploration techniques in the last 30 years. 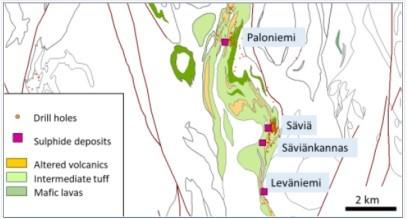 Two historic resource estimates were completed in the distant past: a 1968 resource of 4Mt @ 1.1% Cu and a separate resource of 1Mt @ 2% Zn, and a 1986 resource of 1.8Mt @ 1.52% Cu. These numbers are obviously too small in order to form the base for an economic operation, but it is a nice start, as a relatively small high grade copper operation would need at least 20-25Mt nowadays. As the region harbours three other deposits, the potential is certainly there. According to Kuhn, this is a typical VMS district where they will probably find clusters of mineralization, though size is not predictable of course. However the deposits are very old and there has been substantial deformation and geological change in these old Pre-Cambrian rocks. Exploration will be challenging, but this is Avrupa’s specialty.

The second project is the 187km2 Kolima Property. Historic exploration efforts defined a 2000 x 200-400m zone with zinc mineralization, but also numerous boulders containing gold and copper are present, in typical VMS fashion and geology. A resource wasn’t defined despite 70 drill holes completed. I asked Kuhn if he could disclose more information on this project, and he stated: “Mineralization occurs in thin layers and laminations of sphalerite, which are normally indicative of distal portions of a massive sulfide body. The mass has not yet been located. The 70 holes are not all drilled in one area, but spread around the district. No economic resource was discovered, and vectoring has not yet been defined. This will be one of our first projects: review all the old work and see if we can find potential vectoring information. The airborne geophysics will undoubtedly help us here.” 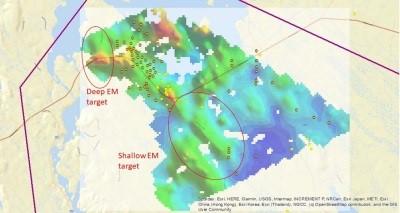 The third project is the Kangasjärvi Property. This 203km2 claim set covers the tiny but high grade Kangasjärvi zinc deposit, which was exposed to surface and mined partially. The latest known historic resource was reported at about 300kt @ 5.4% Zn. The grade is extremely good for open pit zinc, but 300kt isn’t economic. 3 more mineral occurrences have been identified, but not followed up since, and can be seen here: 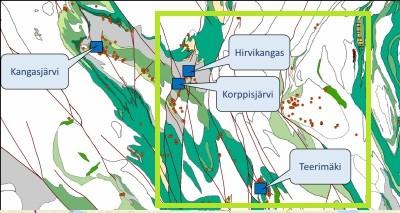 AFOY did complete airborne SkyTEM surveys on the Pielavesi and Kangasjärvi projects, and both companies are reviewing and analyzing the data together, attempting to define drill targets. According to CEO Kuhn, this work will continue during the first year of the exploration program with targets on the Kolima Project worked first as it is the oldest of the project areas. 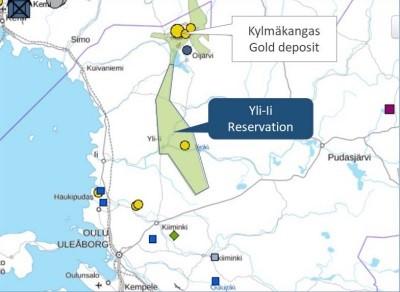 Initial studies over a period of 13 years (2001 to 2014) turned up gold-in-till anomalies over intensely sheared and altered rocks.  Limited drilling resulted in one intercept of 3 g/t gold over two meters at the Kupsusselkä prospect.

When glossing over all projects, the first impression is one of size: all projects are large. I have learned from Zach Flood (CEO from client Kenorland Minerals) that large packages in prospective areas are good as you increase the odds. I do wonder if this wouldn’t take up too much resources to drill permit, sample, define targets, pay holding costs etc. CEO Kuhn answered, “These projects, or reservations, are large areas, indeed. From the reservations we pick out the best areas of interest, as defined by geology, airborne geophysics, historic drilling and mining, etc. We then select the most interesting areas within the reservation and make license applications for these areas.  We will whittle down 300 km2 to 30 km2 in this process, which obviously lowers the monetary risk factors and much better defines the areas of potential success, where we obviously want to work!”

What I do like here is the extensive Yli-li greenstone project which captures a long stretch of greenstone to the south. Another project I like a lot is the Pielavesi project, with several known deposits nearby. I asked CEO Kuhn about his opinion on which projects he thinks are the most prospective for economic mineralization, and what kind of targets he is looking for. He answered that both project areas have obvious first-pass excitement. Our priority, of course, is to define areas where we expect to find mineralization, whether it be VMS or shear-hosted gold mineralization. Once we have a better idea of what is possible, we will decide whether to move it ahead ourselves, or engage a joint venture partner, as is our business model. There are other companies already working in both areas, so we know of the interest in these projects.

For now, there still is exploration going on at Sesmarias, a high priority target of the Alvalade project. The historic Lousal mine also forms a substantial element of this project.

I wondered about the status of the reconstruction of old Lousal data, in order for Avrupa and MATSA to construct a 3D model, which in turn could guide their drilling nearby. CEO Kuhn stated that, “The acquisition of the data is now complete and will be entered into a 3-D modelling program during January/February.  We found a lot of historic information in several old storage areas at the mine and in the government geological survey.  This is quite exciting and we look forward to putting the model together.”

As MATSA was looking to deploy a second rig at the Alvalade project a few months ago, depending on mobilization and landowner authorization of particular drillsites, it was time to get an update on this as well. According to Kuhn, “We had a second drill rig for a single hole in the Caveira Mine area, but the contractor vacated the site after one hole for a better, longer job.  We expect to report results from this hole and from Sesmarias in early January 2022.

Since drilling at Sesmarias progresses pretty slowly, and the geology is very complex and folded, Avrupa management decided to take matters in their own hand a bit more, and acquired 4 Finnish properties. These properties aren’t just a nice mix of prospective greenstone (gold) and VMS projects (base metals), but also quite substantial, and sometimes already have a small historic resource at good grades. The company is now pretty cash strapped, but will probably have to raise in the near future, so they could start exploration as soon as the licenses are approved and the exploration permits are received. In my view this seems a refreshing, new start for Avrupa Minerals, and with current enthusiastic Finnish gold sentiment and gold recovering during days of high inflation, this could be a smart move.

The author is not a registered investment advisor, and currently has a long position in this stock. Avrupa Minerals is a sponsoring company. All facts are to be checked by the reader. For more information go to www.avrupaminerals.com and read the company’s profile and official documents on www.sedar.com, also for important risk disclosures. This article is provided for information purposes only, and is not intended to be investment advice of any kind, and all readers are encouraged to do their own due diligence, and talk to their own licensed investment advisors prior to making any investment decisions.