As lithium sentiment has been improving dramatically since Q4, 2020 for various reasons, Argentina Lithium & Energy Corp. (TSX-V: LIT, FSE: OAY1, OTC: PNXLF) is looking to restart their activities again, after a long period of inactivity due to low lithium product prices. Since the success of Tesla (US:TSLA), skyrocketing since November of last year, everything Electric Vehicle (EV) related received a huge boost of positivism. Conventional car manufacturers were quickly to emphasize their strategies of converting their entire fleet into EV by 2030-2035, and this in turn seems to have resulted into a “gold rush” of sorts into green battery metals, like lithium, nickel and cobalt. As can be seen in the lithium product price charts below, taken from the always useful quick updates about the lithium industry by Matt Bohlsen, this resulted in a sharp upturn:

As the owner of two early stage lithium projects in Argentina, as part of the socalled Lithium Triangle, Argentina Lithium also saw a doubling in share price since November 2020, even spiking at a quadruple in February 2021. The company decided to announce a private placement of C$0.5M @ C$0.09 and a full 3 year (C$0.15 exercise) warrant on March 29, 2021, and closed it oversubscribed at April 14, 2021, for C$0.76M in proceeds. Besides general working capital, this money will be directed towards starting up exploration activities on their lithium projects, and potentially acquiring new lithium projects. Let’s have a look at the revitalisation efforts of Argentina Lithium in this article.

Argentina Lithium is an exploration and development company, focusing its lithium exploration efforts on northern Argentina, with 100% control of more than 22,000 hectares of mining tenures. The company is a member of the Grosso Group, lead by Joe Grosso, and is a resource management group that has pioneered exploration in Argentina since 1993.

The company’s Incahuasi Lithium Project in the Catamarca province is their flagship project, accompanied by the Antofalla project, located in the Salta province. 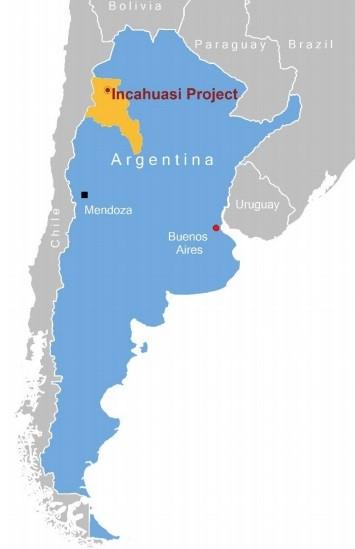 The company sports a tiny market capitalization of C$6.0M based on a May 7, 2021 share price of C$0.14. I expect the company to issue a new option serie soon, as they did with Blue Sky Uranium, in order to incentivize management, new staff, consultants, etc. CEO Niko Cacos had this to say about this subject when questioned:”the success of any company is always dependent on the quality and the talent of the management team. Having such a team incentivized not boosts their performance, but also aligns their interest with that of shareholders”.

Management owns 4.5M shares, or about 10% of outstanding shares. Founder Joe Grosso owns 3.7M shares, Director David Terry owns 415k shares. CEO Cacos sold 480k shares on February 12, 2021, and still owns 750k shares. When asked about this feat, he replied that this position was owned through a holding company owned by his family trust. The decision to sell was not his, but because he serves as a trustee he had to file an insider report. Fair enough. Major shareholders include friends and family who, together with management, own approximately 50% of the outstanding shares.

As can be seen in the chart, although the company hasn’t done much besides doing a raise at the end of March and the first weeks of April of this year, the share price did get a pulse again on the back of Tesla success since the summer of 2020, reinvigorating lithium sentiment and lithium product prices. A rising tide lifts all boats so to say.

The management team of Argentina Lithium & Energy is also at the core of the Grosso Group team, and is led by President and CEO Nikolaos Cacos, who has been with the Grosso Group since inception in 1993, and also the President and CEO of Blue Sky Uranium since 2005, and a Director of Golden Arrow Resources since 2004. All three companies are members of the Grosso Group, and operate predominantly in Argentina. CFO Darren Urquhart isn’t that long with the group but also closely involved like Cacos as he is CFO of all three companies.

When we are talking about the Grosso Group, there is no way we can go around the founder and Director, Joseph (Joe) Grosso. He became one of the early pioneers of the mining sector in Argentina in 1993 when mining was opened to foreign investment, and was named Argentina’s ‘Mining Man of The Year’ in 2005. He has successfully formed strategic alliances and negotiated with mining industry majors such as Barrick, Teck, Newmont , Viceroy (now Yamana Gold) and Vale, and government officials at all levels. At the moment he is a director of Argentina Lithium, the Chairman of Blue Sky Uranium, and Executive Chairman, CEO and President of Golden Arrow Resources, which is the flagship company of the Grosso Group. To me, Joe Grosso is instrumental and successful in managing any jurisdictional risk in Argentina, and very important for Argentina Lithium in this role.

Another important person is Director David Terry, PhD Geo, who is an extremely knowledgeable geologist, has been with the Grosso Group for a long time, and currently is the President and CEO of Genesis Metals, and director of Golden Arrow Resources, Great Bear Resources, and Aftermath Silver.

So far for management, let’s have a quick look at the company projects.

The company owns two projects, the Incahuasi and Antofalla projects. Both projects are located in the socalled Lithium Triangle, an area incorporating parts of Chile, Bolivia and Northern Argentina, which produces about half of the world’s lithium, most of it through salt lake brine operations, and hosts about 60% of known lithium reserves. 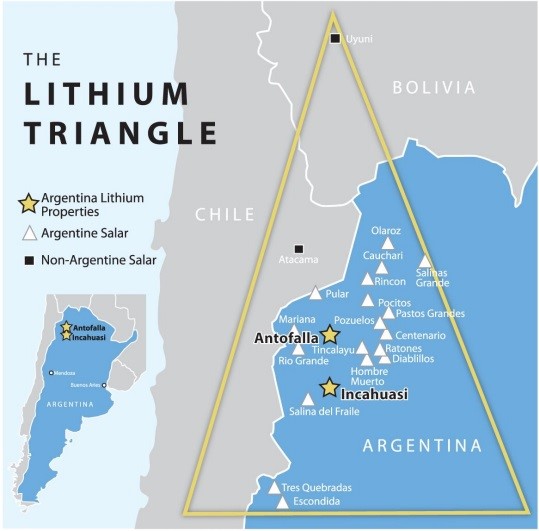 Argentina itself produces about 10% of world production (2020 figures), making it a top five global producer. With Cauchari/Olaroz and Tres Quebradas, Argentina hosts 2 of the world’s best and largest brine projects, with the undisputed number one being Atacama in Chile. Uyuni in Bolivia is also very large, but suffers from high grade contaminants like magnesium, and isn’t an ideal mining jurisdiction.

The company believes the two projects are underexplored, and particularly in case of their flagship Incahuasi project, supports conditions for quality brines at depth. Both projects are located at high altitudes in extremely dry environments, which are ideal for brine operations. The Antofalla project is part of the Antofalla salar (salt lake in Spanish), which has been explored by for example major lithium producer Albemarle. Their reported drill hole grades from the salar in the past include 350 mg/L lithium and 6,400 mg/l potassium. For reference, an economic lithium grade at current lithium product prices surpasses the 500 mg/L mark, so some serious drilling still has to be done here. 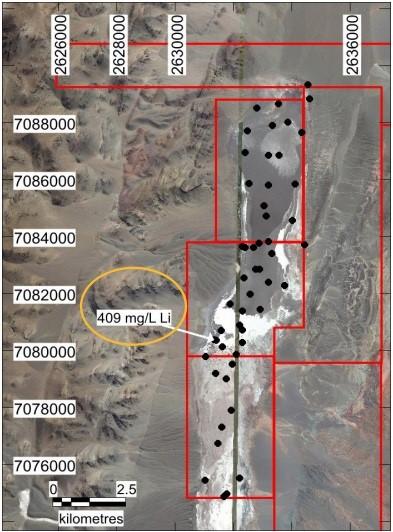 Argentina Lithium completed reconaissance exploration in 2018 at Incahuasi with modest, non-economic results from sampling, and basically shelved their efforts on both projects since then due to crashing lithium product prices, and is looking to revitalize things again, as lithium sentiment and pricing is improving strongly on the back of ever increasing EV initiatives.

On the back of the recently closed financing, management is anticipating to resume exploration activities during the second half of this year, have currently identified a number of lithium opportunities within the Triangle, and are working hard to secure them.

After closing the recent, small C$0.76M financing, management of Argentina Lithium & Energy is looking to start things up again asap, as lithium sentiment has improved significantly after experiencing over two difficult years. The company already owns 2 projects in the Lithium Triangle, the world’s hotspot for brine projects, but since the existing results weren’t economic yet, management is looking to do more exploration on the Incahuasi and Antofalla projects, but is also working hard to acquire other projects, to increase chances of exploration success in the near future.

Since the market cap is just a very tiny C$6M, strong results at the drill bit will most likely leverage into a multi-bagger for shareholders. A lot has to be done before this could be a reality, but the potential returns for this high risk/high reward lithium play with seasoned management with much experience in Argentina and access to cash could justify a gamble at this stage.

I hope you will find this article interesting and useful, and will have further interest in my upcoming articles on mining. To never miss a thing, please subscribe to my free newsletter on www.criticalinvestor.eu in order to get an email notice of my new articles soon after they are published.

The author is not a registered investment advisor, and has a long position in this stock. Argentina Lithium and Energy is a sponsoring company. All facts are to be checked by the reader. For more information go to www.argentinalithium.com and read the company’s profile and official documents on www.sedar.com, also for important risk disclosures. This article is provided for information purposes only, and is not intended to be investment advice of any kind, and all readers are encouraged to do their own due diligence, and talk to their own licensed investment advisors prior to making any investment decisions.