There seems to be no end in sight for current battery metals sentiment, and lithium product prices are the largest beneficiaries in this regard, which is obviously of interest for Argentina Lithium & Energy Corp. (TSX-V: LIT) (FSE: OAY1) (OTC: PNXLF). The company already owns several early stage lithium projects in Argentina, and recently signed an option agreement to acquire two more projects, which will be discussed later in this article.

Most recently, even Ford announced an investment of US$7B as part of a US$30B program in order to convert their operations into an electric vehicle producer, a car brand that I don’t really associate with progressive thinking. As a consequence, there appears to be a shortage of lithium products, which can be witnessed by current pricing charts. It is not that easy to find decent and especially recent charts anymore, as my usual trusted source for prices Matt Bohlsen at Seekingalpha has vanished behind a paywall now with his free articles unfortunately. By means of replacement, I found several other sources, as there is Tradingeconomics: 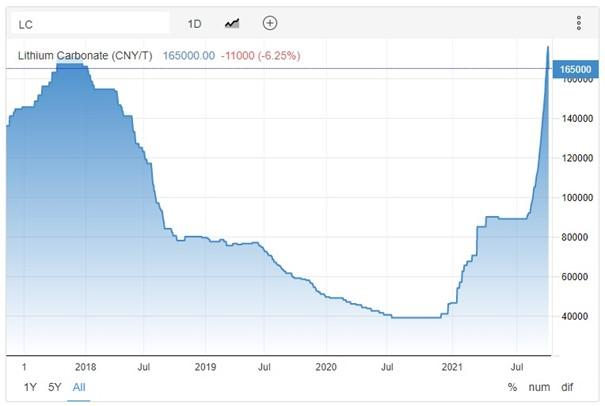 Unfortunately these prices are in Chinese Yuan/Renminbi, so as 1 yuan is US$0.155, 1 ton LCE is worth US$25,757. Please note these are domestic prices. Another source (Fastmarkets) represents lithium carbonate at US$20.50/t: 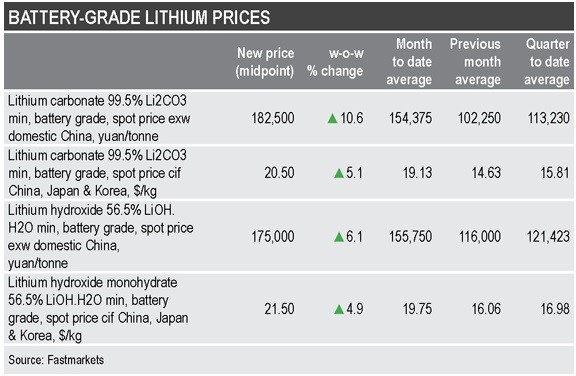 These prices are in fact all time highs, according to Platts. Fastmarkets also publishes useful charts, representing the difference between international markets in USD, and Chinese domestic markets in yuan: 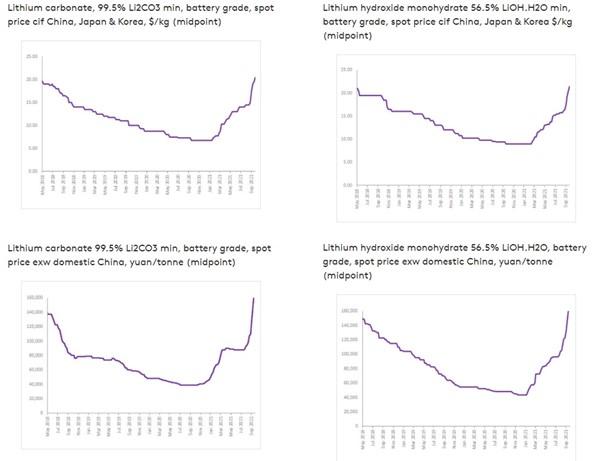 It is interesting to see the domestic pricing experiencing a bigger spike. According to Argentina Lithium CEO Niko Cacos, this is most likely caused by higher interest for everything EV related in China. If the current shortages of lithium products are short-lived and caused by COVID is hard to say, consensus among analysts seems to be LCE pricing exceeding US$15,000-16,000 for years to come. This is of course an excellent development for Argentina Lithium, which is in the process of revitalizing the company. After raising a modest C$0.76M in April of this year, the company set out to acquire more exploration assets.

By entering an option agreement to acquire a 100% interest in the Rincon West and Pocitos properties in the centre of the lithium district of the Salta Province (a mining friendly jurisdiction in Argentina), the company meaningfully expanded their lithium project portfolio. The terms for the two properties, with a combined footprint of 18,227 hectares, aren’t cheap, as the company already issued 750,000 shares to the local vendor on signing plus C$500,000 worth of shares over a 12-month period; and cash payments totaling US$4,200,000 over 36 months, but limited to only US$1,050,000 in the first 18 months, US$800,000 of which are firm commitments over the first year. At a share price of C$0.29, this meant the 750k shares are worth C$217,500, and the total compensation would be C$6.05M. This is quite something for a company with a C$12.65M market cap, which just weeks earlier traded at about half of this: 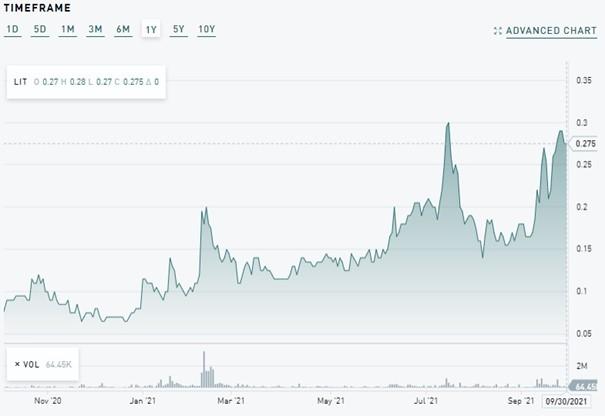 The share price of Argentina Lithium already appreciated on lithium sentiment, but still doesn’t have a resource or drilled economic intercepts. Imagine what will happen if they do on one of their new properties. There isn’t much information to go on per the news release, but in my view the Rincon West property seems the most interesting one, as it is located on the west side of the Rincon Salar, owned by Rincon Mining (private) and Argosy Minerals (ASX-listed), which operate individually and very differently from each other.

Rincon Mining has been testing a pilot plant since 2017, testing a technology that would avoid using evaporation ponds. They tried to raise US$650M in vain for 2 years since 2018, and as a consequence changed the technology in 2020, and downsized the plant from 25kt LCE to 10kt LCE. They are fully owned by well-known mining financier Sentient Equity Partners, and are looking to raise US$100M now.

Argosy is already advancing a first 2,000 tpa LCE modular unit through construction, seeking production mid 2022. If successful, this will be expanded rapidly into a capacity of 10,000tpa LCE. Here is an areal view of their project: 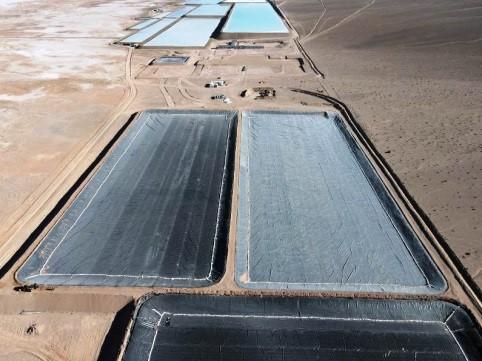 They have a modest JORC resource of 245kt Li2CO3, at an average grade of 321mg/L, which needs a lithium product price of over US$10,000/t Li2CO3 in order to be economic. This seems a formality now fortunately, although it wasn’t just 6 months ago. As can be seen on this map, taken from the presentation of Argosy, there is plenty of room for Argentina Lithium to acquire interesting claims of the Rincon Salar, as the coveted brines containing lithium are located at depth (below 100m at this particular salar): 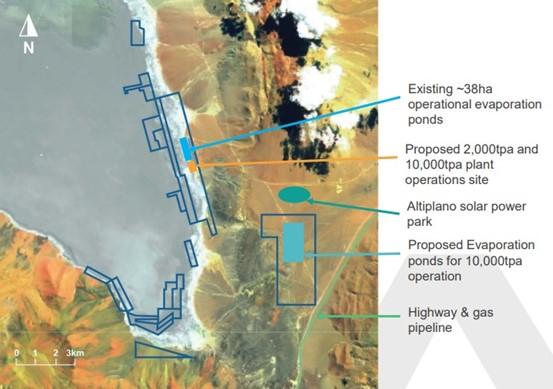 According to CEO Cacos, a site map with claims and more information can be expected in the presentation around a week from now. I delved into my own database of information, and came up with this table, lining up a number of well-known salar-type brine deposits in the Americas, with most of them in the Lithium triangle:

To my delight the Salar the Rincon was also present. As can be deducted, the average lithium grade isn’t very high, but at current prices this shouldn’t be a problem, as Argosy is proving already. With lithium brine deposits, one always has to be careful with contaminants, for example calcium or magnesium, as they cause increased processing costs. For this salar the magnesium/calcium/sulfate content is somewhat above average but certainly not problematic.

There isn’t much information available on the second property, the Pocitos prospect, as it is located on the western side of the Pocitos salar, but has seen modest lithium exploration in the past, including geophysics and surface sampling, with very limited drilling.

The company also optioned additional properties at the Salar the Antofalla on August 4, 2021, where they already owned a significant 9,000 hectare land package. Argentina Lithium is earning into a 100% interest in a 5,380.5 hectare property set adjacent to the existing claims. Albemarle owns the largest part of this salar, which has a historic estimate of 11.8Mt LCE @ 350mg/l Li. Terms of the option agreement include cash payments totaling US$4,000,000 over 42 months, but limited to only C$600,000 in the first 18 months. The option also includes annual exploration expenditure commitments of C$500,000 in year one, followed by C$1.5M in year two, C$2.0M in year 3 and C$3.0M in year 4, totaling payments at C$12.1M. These amounts mean that the company has to explore aggressively, and find something worthwhile, in order to get the share price to significantly higher levels, so sufficient money could be raised by then to handle the payments, besides financing ongoing exploration programs and G&A.

The latest option agreements mean significant payment obligations for the company within one year, and as the current cash position is at C$500K now, I was wondering when management was looking to raise money in the markets, and how much. If resuming exploration activities this year is still the goal as stated in my last article, doing a placement soon is certainly necessary. According to CEO Cacos. As we are finalizing our exploration plans, which we will announce shortly, it is certain that we are going to have to raise additional funds to finance these programs.

Furthermore I asked Cacos what his plans/strategy are for the first 6-12 months, regarding exploration programs, exploration drill permits, or even acquisition of more projects. He answered: “As mentioned above, our exploration plans will be announced soon. Argentina holds tremendous opportunities for making new lithium discoveries, especially within the Lithium Triangle. It remains one of the most underexplored countries in the world. Therefore, even with the onset of our exploration programs, we continue to prospect and look for new opportunities, as there is great promise to make multiple world-class lithium discoveries in this country.” It will be interesting to see what the company is up to in the short term for sure.

After signing two option agreements for a 100% ownership in 3 different lithium brine projects in Argentina, management appears to have sufficient projects to work on for the foreseeable future. Raising cash for upcoming exploration programs is the top priority now, and hopefully the company can start drilling as soon as possible, as the markets are enjoying an extremely strong lithium sentiment the last six months. I am looking forward to the exploration programs and other developments of this tiny lithium player, which is finally gearing up for action.

I hope you will find this article interesting and useful, and will have further interest in my upcoming articles on mining. To never miss a thing, please subscribe to my free newsletter on www.criticalinvestor.eu in order to get an email notice of my new articles soon after they are published.

The author is not a registered investment advisor, and has a long position in this stock. Argentina Lithium and Energy is a sponsoring company. All facts are to be checked by the reader. For more information go to www.argentinalithium.com and read the company’s profile and official documents on www.sedar.com, also for important risk disclosures. This article is provided for information purposes only, and is not intended to be investment advice of any kind, and all readers are encouraged to do their own due diligence, and talk to their own licensed investment advisors prior to making any investment decisions. 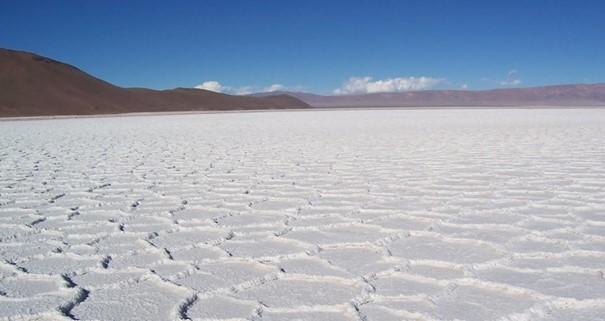