Alianza Minerals (ANZ.V, TARSF.US) recently completed the 2021 drilling campaign at their flagship Haldane silver project in the historic Keno Hill Mining District. After the impressive 1.78m @ 818g/t silver and 1.26m @3,267g/t silver intercepts, the company finally seems to be on track for economic silver mineralization, and created some expectations along the road as well. The drillers managed to hit more silver at each hole they drilled since, although the results weren’t as stellar yet, but still decent.

On September 23, the last two holes were reported from the 2021 drill program at Haldane, focusing on the West Fault target, HLD21-26 and HLD21-27. These holes were 50m stepouts along the Ewing North Fault, and can be seen here: 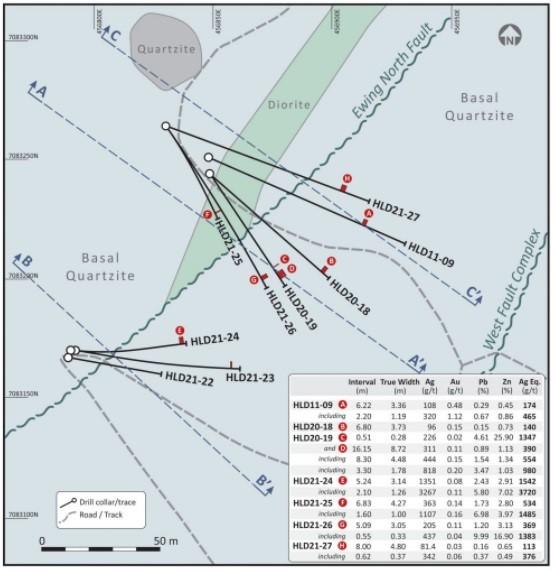 The aforementioned two best holes are HLD20-19 and HLD21-24, and it will be clear from looking at the table that quite a lot of intercepts also contain substantial amounts of zinc and lead, resulting in a sometimes much higher AgEq grade. It is far from uncommon to see these two metals show up at zinc mineralization, and can often contribute meaningful amounts of byproduct, lowering the opex of a mine.

“After the exceptional result from drilling late in 2020 in HLD20-19, our approach was to determine the orientation of high grade shoots of vein mineralization through a grid pattern of 50 metre step outs on strike and down dip. This approach was successful in extending mineralization to depth and identifying the likely orientation of high-grade silver mineralization. This drilling also indicates that the West Fault is a complex of structures and veining tends to be strongest in an upper structure (WF2) in the northeast and transitions to a lower structure (WF1) to the southwest.”

These two structures can be seen here: 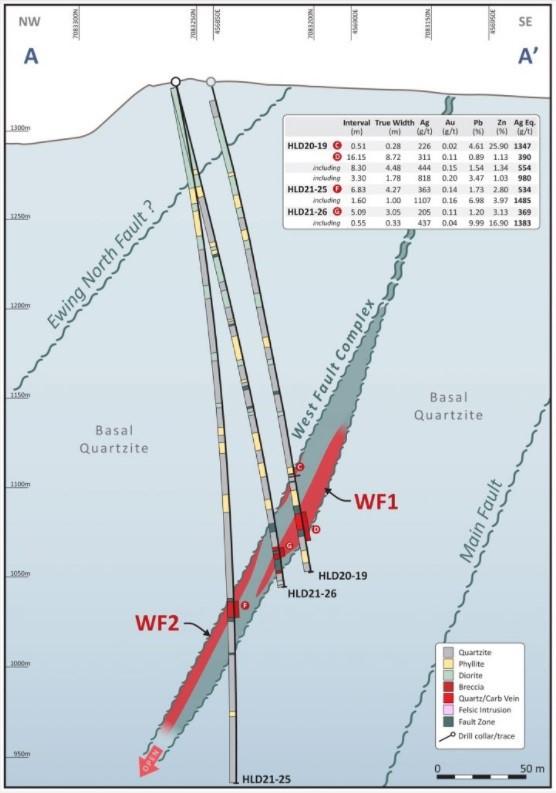 Weber continued: “Although strong veining within the West Fault structure was seen in both HLD21-26 and HLD21-27, the overall width was slightly wider and the galena (and closely associated silver) content was lower in general which leads us to believe that the strongest, thickest and potentially highest grade mineralization may lie along strike to the southwest and down plunge. We look forward to our next phase of work which will target this extension.”

It wasn’t exactly clear to me why Weber and his team think the best mineralization might be located to the southwest along strike, and most likely not to the northeast (although they don’t rule it out either) which had a hole returning more or less the same results. This is what he had to say about it: “We prefer the downdip and the southwest directions as the intersections in holes 24 and 25 show the system is open to depth. We will, at some point, drill the northeast direction and could see the vein strengthen in that direction. But for now the results point to higher priority drilling to the southwest.”

Management currently views the area where the width and grade of the vein is the strongest, as a complex of faults and splays rather than a single discreet fault structure. The latest concept is believed to be a “step over” from the WF1 vein to the WF2, occurring in the vicinity of the HLD21-24 and -25. The orientation of the step over might plunge steeply to the southwest in the plane of the West Fault Complex and high-grade shoot geometries could also be aligned in this direction. CEO Weber expects to drill further stepouts around Q2, 2022, but targeting of those holes is just starting now with an in depth evaluation of the results, and relating them to geological observations in drilling. Once that is further along they will have a better idea of the size and scope of the next program.

The West Fault Complex is traced for over 650m and can be interpreted to extend to 1.1 km in length before merging with the 2.2 km-long Main Zone structure.  Drill testing to date covers only a fraction of the West Fault Complex target. As a reminder, here is an overview: 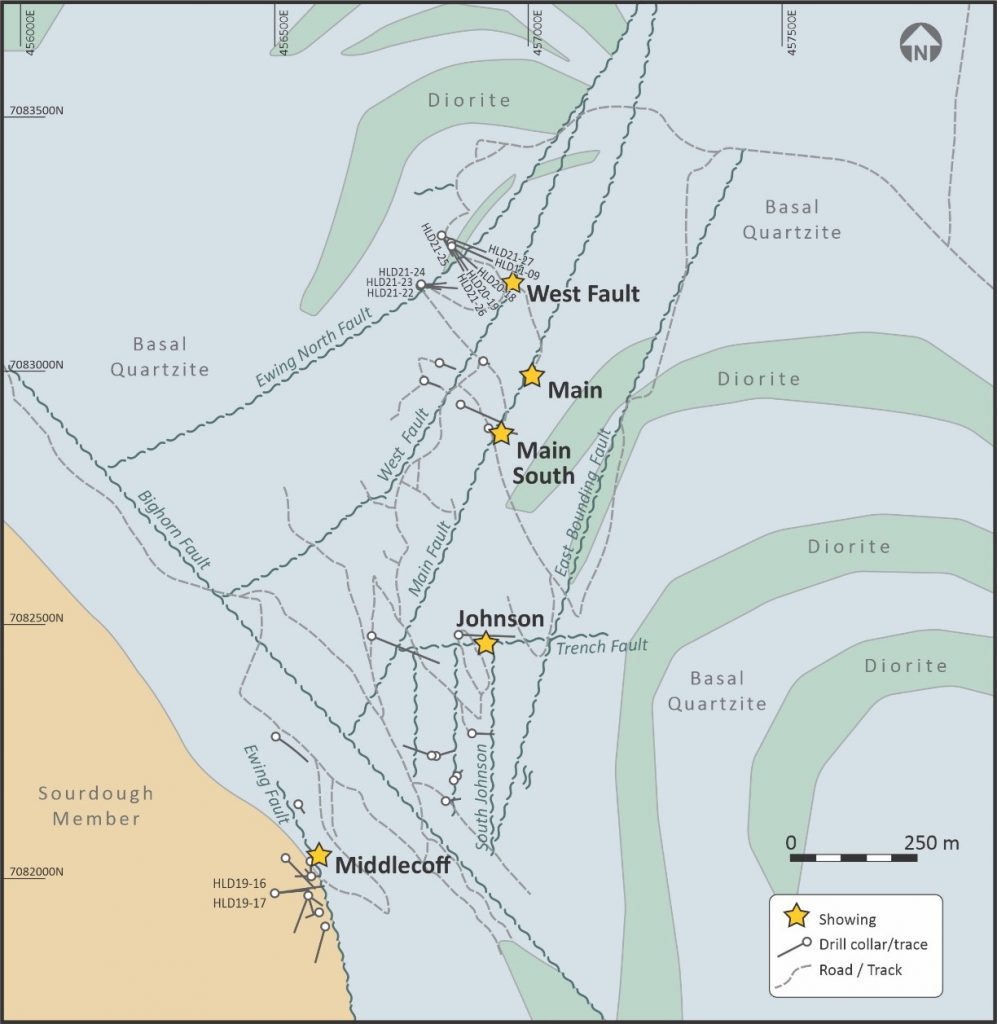 Silver mineralization has now been intersected in nine holes that pierce the WF1 and WF2 veins over 90 metres of dip direction and 100 metres of strike direction. The West Fault Complex is one of the four high-priority silver-lead-zinc-bearing vein drill targets at Haldane, shown in the map above. 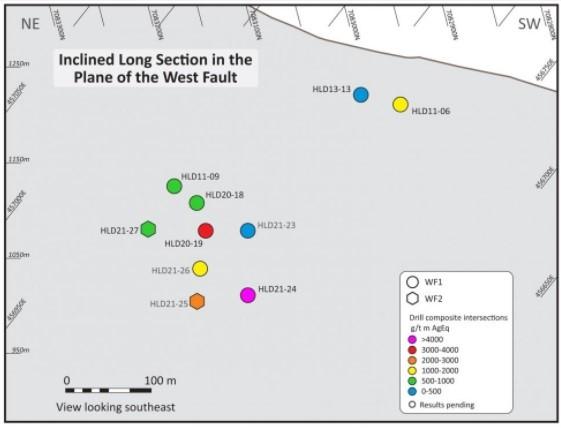 The reported holes from August 18 (HLD21-23 and HLD21-25), combined with best hole to date HLD21-24 (reported on July 12 and discussed in an earlier article) were a nice set of assays, showing economic results down dip and along strike, represented by this table:

The high grade remains confined to narrow veins. As the minimum width for large scale mining is usually 2m, these veins are still very economic, as the gross metal value for 300g/t Ag is US$110/t if a vein would be 1m wide, as another 1m of waste would have to be mined as well. Underground mining costs are usually in the range of US$45-60/t, so there is a healthy margin.  It is interesting to see that if silver grades aren’t spectacular, often the zinc grade is substantial. As the deeper intercepts seem to have the highest silver-equivalent grades, I wondered why management didn’t drill deeper targets as well with their last holes, hitting the structure below for example HLD21-24. I also wondered if the geology of nearby drilling Alexco Resource (AXU.TO) couldn’t provide useful conceptual information about potential trajectories of silver veins at Haldane, as the geological makeup is the same for the entire Keno Hill District. As a reminder, Alexco Resource (AXU.TO) has drilled results like 8.76m @ 3,583 g/t Ag, 5.3m @2,070 g.t Ag, 8.15m @ 1,414 g/t, 6.12m @1,560 g/t and 7.46m @1,381 g/t Ag at their project nearby, and is looking to increase the existing resource of 45Moz @ 844 g/t Ag. They own several other high grade deposits in Keno Hill as well, only confirming the very prolific nature of the Keno Hill region. CEO Weber answered: “Our program was planned to test the most likely vein plunges as indicated by the orientations at the other Keno District mines, including those that Alexco is actively mining. In the 2020 plan we wanted test the extensions up and down dip of hole 19. We tested down dip with Holes 24 and 25, which showed the extensions to depth, be we wanted to stick to the original plan to test up dip with hole 27.”

Despite the good results, the share price appears to be sideranging since March of this year and even breaking down further: 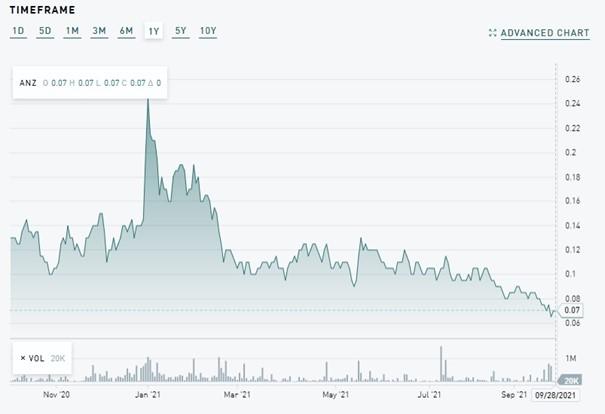 In my view, there are a number of reasons for this. The summer doldrums and the weakening silver price have undoubtedly had its fair share of impact on investor sentiment as well, and tax loss selling seems to have started even earlier this year. Notwithstanding this, the good drill results at Haldane didn’t receive much enthusiasm, as if only stellar intercepts indicating pretty economic and sizeable deposits could move the needle nowadays. To me this is not justified, as exploration is a difficult business, and such deposits aren’t found at the first drill hole anymore, but it appears to be the new normal in this period of negative sentiment. Until this sentiment changes, there is not much Alianza can do it seems, but keeping up the good work at Haldane, hoping sentiment turns positive again and potentially producing good results on their other targets and projects.

Management would definitely like to continue to grow the West Fault target, but would also like to go back to Middlecoff and their new Bighorn target, to follow up on the new vein targets discovered in 2019 drilling. According to Weber, plans for these targets will be incorporated into the 2022 planning. Holes at these targets will be prioritized in the sequencing for next year’s drilling.

Besides Haldane, the company is working at Twin Canyon in Colorado, and Tim Silver in the Yukon. They are working on a drill permit for Twin Canyon. According to management, indications are that the grant of the permit is imminent, and it is likely that potential partners are waiting for the permit grant to complete a deal to explore the project.

Regarding the Tim project, Coeur Mining, the operator of the JV, has completed a reconaissance exploration program, which included a SkyTEM airborne geophysical survey that was followed up by mapping, trenching and soil geochemical surveys. According to CEO Weber, results of this program are not complete yet, but Coeur has indicated its desire to conduct additional trenching and followed by diamond drilling in 2022.

Regarding the Yanac Copper project in Peru, Pedro Castillo has finally been chosen for president, unfortunately he is vehemently anti-mining, notwithstanding this management is actively talking to potential partners in order to drill test the copper porphyry target here, discussions are ongoing.

Alianza Minerals also announced the first acquisition under the recently formed Strategic Alliance with Imperial X (now called Cloudbreak Discovery, PLC), involving the Klondike Project, located in Colorado, US. Management views this as an excellent opportunity to explore for economic copper mineralization, as the project has the following highlights:

Alianza is currently actively exploring the project, and just finished a sampling program, which already generated numerous copper showings like this one:

According to CEO Weber, the alliance partners have a group interested in taking on the Klondike project. They expect this new group to push the exploration towards drilling quite quickly, so the application for a drill permit has been initiated. It is conceivable that a drill program could be completed in 2022.

As a reminder, the strategy of the alliance is to acquire and explore copper deposits in the United States, more precisely in Arizona, Colorado, New Mexico and Utah. Under the terms, either company can introduce projects to the Strategic Alliance. Projects accepted will be held 50/50 but funding of the initial acquisition and any preliminary work programs will be funded 40% by the introducing partner and 60% by the other party. Weber stated to me that they have another acquisition closing soon, and he is headed to Colorado in early October to look at Twin Canyon, Klondike and potential targets for the Strategic Alliance.

The Haldane project, and more specifically the West Fault target, keeps returning (very) economic intercepts. Management believes that the strongest, thickest and potentially highest grade mineralization may lie along strike to the southwest and down plunge. It will be very interesting to see if Alianza Minerals will finally be able to hit Alexco type of intercepts, hereby proving the possibly equal mineral potential of their own claim package, as it is part of the same geological formation at Keno Hill. Besides Haldane, there are a number of other projects under exploration, of which Tim, Klondike and new copper acquisitons can be expected to provide news results prior to Christmas. Tim results should be interesting, especially with early indications of a 2022 drilling program providing exposure to another high grade silver project.

I hope you will find this article interesting and useful, and will have further interest in my upcoming articles on mining. To never miss a thing, please subscribe to my free newsletter, in order to get an email notice of my new articles soon after they are published.

The author is not a registered investment advisor, and currently has a long position in this stock. Alianza Minerals is a sponsoring company. All facts are to be checked by the reader. For more information go to www.alianzaminerals.com and read the company’s profile and official documents on www.sedar.com, also for important risk disclosures. This article is provided for information purposes only, and is not intended to be investment advice of any kind, and all readers are encouraged to do their own due diligence, and talk to their own licensed investment advisors prior to making any investment decisions.