As precious metal prices, alongside allmost all other metals, are performing well, Alianza Minerals (ANZ.V, TARSF.US) management received lots of interest, and was able to reel in subscriptions for their non-brokered C$1.2M private placement, announced at May 31, 2021. The placement consisted of C$0.12 flow through shares, with no warrants attached to it, which is a sign of strength and rare. Red Cloud Securities acts as a finder, and will be, together with other finders, eligible for a finders fee of 7% in cash and 7% in finders fee warrants. These warrants are exercisable into shares at C$0.12 for a period of 2 years. The proceeds of this round will be used for exploration on the flagship Haldane Silver project in Keno Hill, located in the Yukon.

After this financing will be closed, which is planned to happen the next few days, the treasury of Alianza Minerals will contain C$2.2M The company also enjoyed warrant exercises to the tune of C$625,000 since September 30, 2020, coming from the July 2019 and February 2020 private placements. According to CEO Jason Weber, more exercises can be expected in the coming months (There are 11.35 million warrants at $0.10 expiring July 2022 and an additional 19.1 million expiring in Feb 2023 – we expect those to be exercised soon as share price moves up and/or they get close to expiry – especially the July 2022 set). According to him, Alianza is now fully funded until Q2, 2022.

As there actually were no plans in Q1 to do more financings for the remainder of this year, I wondered what changed Weber’s mind, although the golden rule is when you can get the money just take it. According to him, there was financing available, and with the challenge in finding drills for projects in the Yukon this year, he felt  it was important to expand the current program while they had the rig on site, as it will be very difficult to locate another later this season to bring back to Haldane. I also wondered if he wouldn’t ramp up exploration if they hit something big at Haldane, with more rigs, raising more funds, especially when silver prices keep increasing. He answered that .Alianza would definitely want to ramp up with a big program at West Fault should the drilling be successful, but that would be subject to drill rig/crew availability.

Recently the company announced the commencing of Phase 2 drilling at Haldane on May 17, 2021. This has been slightly delayed as it was planned to start in April. According to Weber this small delay was caused by a late winter in the Yukon. The first results are expected late July. This program will focus on the West Fault target, where highlight drill hole HLD20-19, reported on January 28, 2021 intersected 16.15 m (estimated true width 8.72 m) averaging 311 g/t silver, 0.89% lead and 1.13% zinc. This includes a high-grade interval of 818 g/t silver, 3.47% lead and 1.03% zinc (980 g/t AgEq) over 3.3 m (1.78 m estimated true width). Drilling at the Middlecoff target returned less spectacular results, with hole HLD20-21 having 0.4m @ 342g/t Ag from 186m to show for, and HLD20-20 returning no mineralization at all as it was terminated before the target depth due to excessive hole deviation. According to management, it shows that the structure is continuous to the south, and they will continue to explore to the south and depth for thick, high grade silver intercepts as witnessed at West Fault drilling.

This Phase 2 drilling will systematically follow up on this result testing along strike and down dip to define possible high-grade mineralized shoots associated with HLD20-19. The target remains open in all directions. It is expected that up to 4 holes will be completed in the current campaign. An overview of Phase 2 drilling can be seen here:

A more zoomed in map can be seen below: 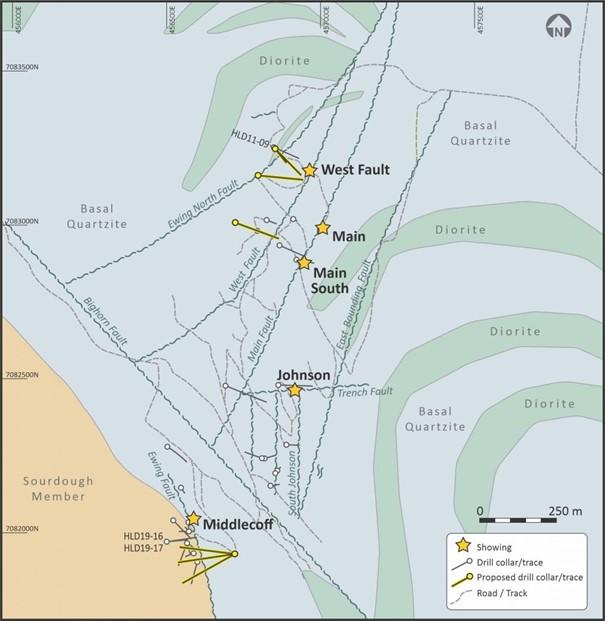 Looking a bit more in detail on the West Fault Drilling: 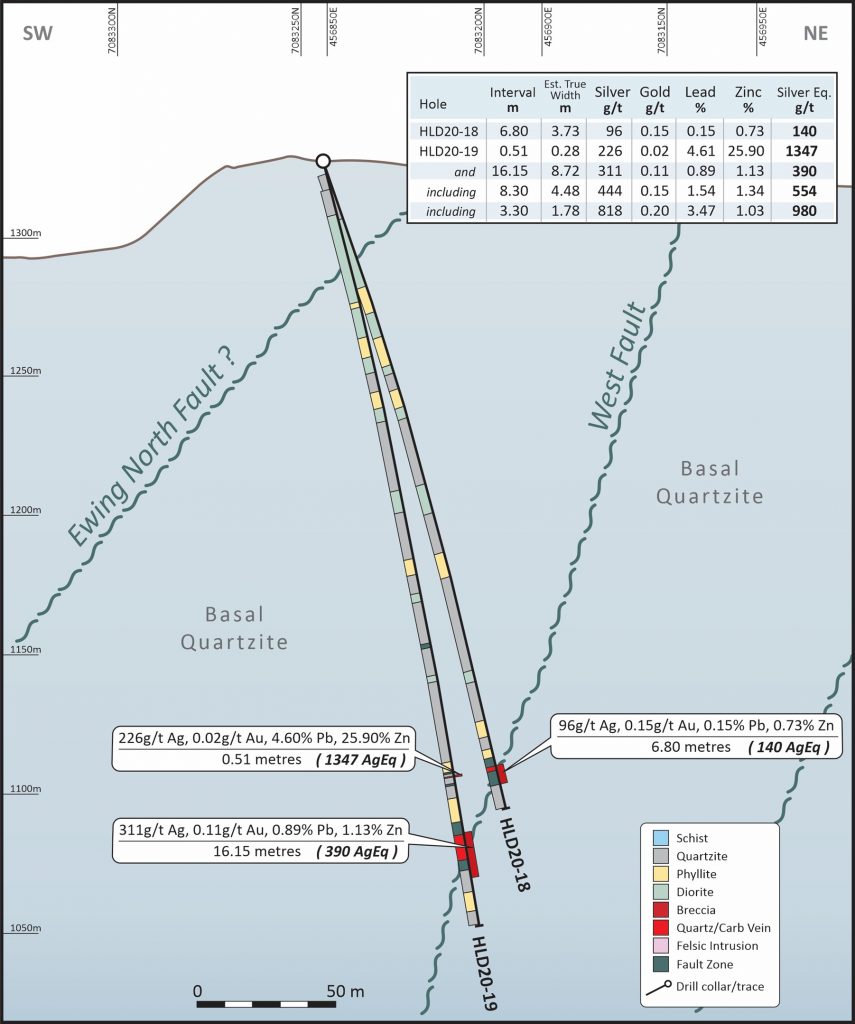 As can be concluded from the scale in this map, these three holes are just a very small part of the West Fault Structure, which currently is interpreted by management to be over 1,750m in strike length. The following section shows the intercepts relative to the two main faults. I asked CEO Weber if he could be so kind to draw the currently planned trajectories on this map in yellow of the 4 drill holes that are drilled now, and asked him why these specific trajectories and locations were chosen. He was happy to outline the 4 collars, and replied that they are systematically stepping out on ~50 m centres to identify the orientation of a high grade “shoot” that may be represented by the intersection in HLD20-19. As they get more information (drillholes) they update the order of planned pierce points.

As a reminder, Weber’s positive attitude is reinforced by the great drill results that Alexco is currently producing at their Bermingham Northeast Deep Zone, which is located in the center of the Keno Hill mining district, in between the old mines. Highlights of their program were 8.76m @ 3,583 g/t Ag, 5.3m @2,070 g.t Ag, 8.15m @ 1,414 g/t, 6.12m @1,560 g/t and 7.46m @1,381 g/t Ag. Alexco is drilling to expand the existing resource of 45Moz @ 844 g/t Ag at depth, and they own several other high grade deposits in Keno Hill, only confirming to Weber that their Haldane location is close to prolific areas.

Other active projects of Alianza Minerals are Twin Canyon in Colorado, and Tim Silver in the Yukon. They expect to get a drill permit for Twin Canyon this summer, and are actively looking to find a JV partner who could assist in exploration. The goal is to start drilling in Q3 of this year. 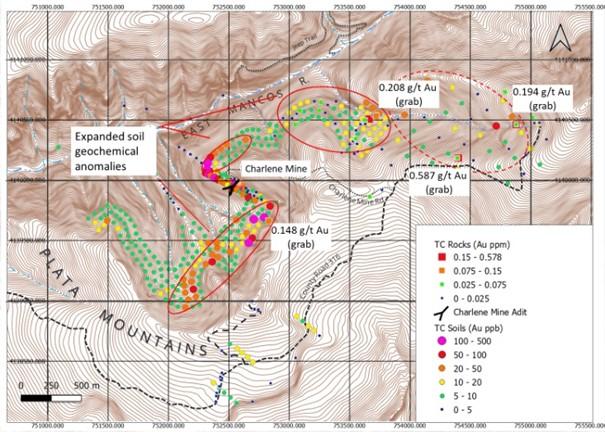 The company completed a soil sampling survey, and an underground structural mapping and sampling program on the Charlene Mine (see center of map below), and successfully detected gold values (up to 6.28g/t Au), and expanded the gold in soil anomaly footprint.

CEO Weber was enthusiastic about the results so far:

“We are excited by the results of our sampling programs at Twin Canyon. We have now demonstrated a large anomalous gold footprint over 3,000 metres in length with multiple prospective altered host stratigraphic horizons. A key component of the program was gaining an understanding of structural controls for gold mineralization, which we have achieved along with returning numerous multi-gram-per-tonne gold analyses.  This knowledge will be utilized in designing and refining drill targets at Twin Canyon and will be integral to finding a partner to advance the project through drilling.”

Regarding the Tim project, Coeur Mining, the operator of the JV, has commenced a reconaissance exploration program last month, which consists of a SkyTEM airborne geophysical survey, and will be followed up by groundwork later this season. The survey is expected to collect magnetic and resistivity data over the concessions to help identify and delineate structural features on the property. It is also expected that this data will be valuable in mapping geology in areas of sparse outcrop. This data will be used to plan subsequent work including mapping, soil geochemical sampling and trenching later this summer. According to Weber, the results of the survey are already known to Coeur, but he is not allowed to share them, as is often the case when the JV partner is the operator. I asked him if he had a grasp on what and when he was able to share any exploration results with the general audience, and according to him it will most likely be late 2021 before they have anything they can release publicly.

On a final note, the company also reported on April 28 the acquisition of additional data on the Yanac Copper project in Peru. Yanac is a drill-ready copper porphyry project, and the data contained results from a 5 hole RC drill program from 2005. One hole returned 232m @023% Cu and 0.015% Mo. The company was planning to target follow up drilling, but the current elections in Peru seem to point towards a very close victory for candidate Pedro Castillo, who is vehemently anti-mining, so management is waiting for the definitive outcome. According to Weber, a victory for Castillo has no consequences for holding the project in the near term, but it would factor in the decision-making process if the climate for mining in Peru were to drastically change for the worse. He added that they are actively talking to potential partners to take the project on so any uncertainty has not had a large impact yet.

The wait is on for the upcoming drill results on Haldane which are expected late July, and an additional C$1.2M in the coffers of the company doesn’t hurt of course. The goal is resembling the central Keno Hill grades, as drilled by the likes of Alexco, routinely containing 4 digit silver grade results over 5-10m. If Alianza could succeed in producing such assays, and the silver price holds up or rises even further as is widely anticipated among experts, the tiny market cap of C$15M should be something of the past real soon. As the company is involved in more than one project, the gamble isn’t as binary as with a one project greenfield explorer.

I hope you will find this article interesting and useful, and will have further interest in my upcoming articles on mining. To never miss a thing, please subscribe to my free newsletter, in order to get an email notice of my new articles soon after they are published.

The author is not a registered investment advisor, and currently has a long position in this stock. Alianza Minerals is a sponsoring company. All facts are to be checked by the reader. For more information go to www.alianzaminerals.com and read the company’s profile and official documents on www.sedar.com, also for important risk disclosures. This article is provided for information purposes only, and is not intended to be investment advice of any kind, and all readers are encouraged to do their own due diligence, and talk to their own licensed investment advisors prior to making any investment decisions. 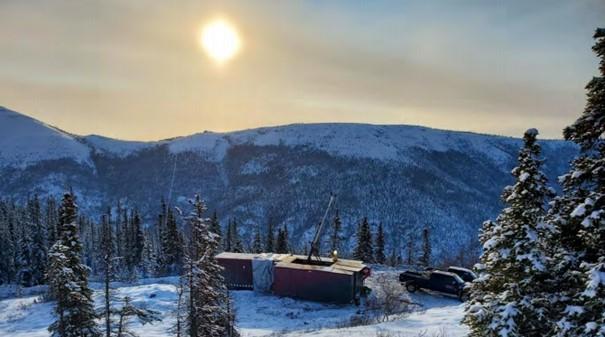