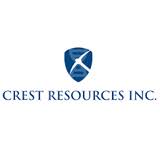 Crest Resources Inc. (CSE: CRES) is pleased to announce that the Company and its co-vendors have entered into agreements with Mariner Resources Corp. to sell Mariner a 100% undivided interest, subject to a retained royalty reserved by underlying vendors, in the True Grit and Middle Ridge North gold properties located in Central Newfoundland and Labrador.

Crest President and CEO Michael Collins comments, “Crest has worked hard to develop a strong package of projects in the Exploits subzone in Newfoundland. Mariner is a Newfoundland focused company with an exceptional management team with a history of exploration successes. We believe that Mariner will be very successful in exploring and developing the Middle Ridge and True Grit Gold Projects.”

Under the terms of the Agreements, Mariner will acquire a 100% interest in the Properties for consideration of 7,000,000 common shares of Mariner. A 2.0% net smelter returns royalty on one mineral license, of which Mariner can purchase 1.0% NSR for $1,000,000 at any time, is reserved by the underlying vendor of the license. The Vendors’ interest in the Properties is currently held 85% by the Company, 5% by Volatus Capital Corp. and 10% by Nicholas Rodway, an officer of the Company. The Company will receive 5,822,500 common shares of Mariner in the transaction.

The technical portion of this news release has been reviewed and approved by Mr. Nicholas Rodway, P.Geo. and VP Corporate Development and a shareholder of Crest and Mariner, a qualified person as defined under NI 43-101.

Crest Resources Inc. is a British Columbia company listed on the Canadian Securities Exchange. The Company’s principal business activity is the acquisition, exploration and evaluation of mineral property assets in Canada, Australia and Peru and the investment in mineral exploration companies and related mining technologies of merit.