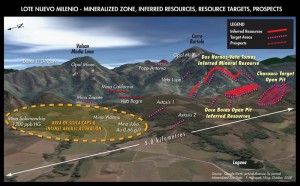 Cream Minerals Ltd. (TSX VENTURE:CMA)(OTCBB:CRMXF)(FRANKFURT:DFL) wishes to announce that the Company has entered into a letter of intent for the sale of the Company’s Nuevo Milenio Silver-Gold Property to a British Columbia numbered company controlled by a consortium group which includes shareholders of Cream for consideration of $600,000. The Transaction will take the form of a sale of all of the outstanding shares of the Company’s wholly-owned subsidiary, Cream Minerals de Mexico S.A. de C.V., which owns 100% of the 2,612.5 ha Nuevo Milenio Silver-Gold Property located in Nayarit State, Mexico. The Transaction is subject to the execution of a definitive agreement, as well as disinterested shareholder approval and the approval of the TSX Venture Exchange.

“We have engaged in an exhaustive and thorough canvassing of the market for potential buyers or joint venture partners for Nuevo Milenio since initiating our strategic review process in July 2012. Having engaged in discussions with numerous companies and given the context of the extremely challenging market conditions and financing environment for the entire junior mining sector, I believe the sale of Nuevo Milenio at this time is the only reasonable way for Cream to continue as a going concern, with immediate liquidity to allow us to move ahead and explore additional opportunities to rebuild shareholder value,” stated Michael O’Connor, President and Chief Executive Officer of Cream.