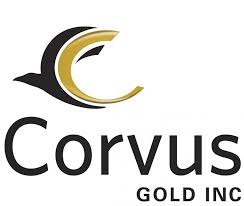 Corvus Gold Inc. (TSX: KOR) (OTCQX:CORVF) announces it has received further assay results from ten new drill holes from its 2017 Phase I drill program at the Mother Lode project in southern Nevada (Table 1). The latest results include northwest and deep in-pit drilling, as well as step-out drilling to the west highlighted by hole ML17-020, which returned 96.0 m @ 1.35 g/t gold and 1.24 g/t silver. Results continue to expand high-grade zones both laterally and at depth, which is potentially increasing the overall size and grade of the Mother Lode deposit (Figure 1).

The Phase I drill program, which ended December 16, 2017, completed 12,829 metres of drilling, representing 42 holes, 25 of which have now been reported. Phase II of the exploration drill program has commenced and is scheduled to drill 10,000 metres, focused on further expanding the deposit to the west, north and at depth.

Holes ML17-018 through ML17-022 successfully demonstrate the continued grade and thickness of the shallow dipping sediment hosted deposit to the west.The new holes have drilled deeper in the system and appear to have intersected a new zone of mineralization below the currently targeted deposit. This is illustrated by hole ML17-020, which ended in 7.62 m @ 3.46 g/t gold and 9.98 g/t silver within 27.4 m at 1.31 g/t gold and 3.9 g/t silver.Most of the new deeper holes ended in mineralization that is currently believed to be related at depth.Deeper drilling will be required to evaluate the potential of this new zone and will be conducted in the 2018 exploration program.

Drill hole ML17-017 (35.1 m @ 1.97 g/t gold) from the northwestern extension of the deposit, extends mineralization intercepted in hole ML17-003 and historic hole ML-338 (56.6 m @ 1.35 g/t gold & 73.2 m @ 2.05 g/t gold) to the west.Hole ML17-017, similar to ML-17-003 and historic hole ML-338 was not completed to its intended target depth, as they were lost due to poor rock conditions. The Company completed two additional holes to the north of hole ML-338 during the Phase I drill program with assays pending.These two new northern step-out holes were completed to the intended target depth and should provide insight into the expansion potential of this zone of mineralization.

Drill holes ML17-016 and ML17-023 through ML17-025 were drilled under the historic Mother Lode pit and are designed to verify and potentially expand the historic mineral resource estimate.The intercepts in these holes have matched well with the historic resource which is generally thinner and lower grade on the southern end of the deposit.Significantly, it appears drilling has intersected a new zone of mineralization at depth below the historic resource as illustrated by hole ML17-025 (13.7 m @ 1.41 g/t gold) and hole ML17-016 (9.1 m @ 0.98 g/t gold & 12.2 m @ 0.96 g/t gold).Prior historical drilling primarily used vertical drill holes to a nominal depth of about 500 feet (150 m), with many holes ending in mineralization. 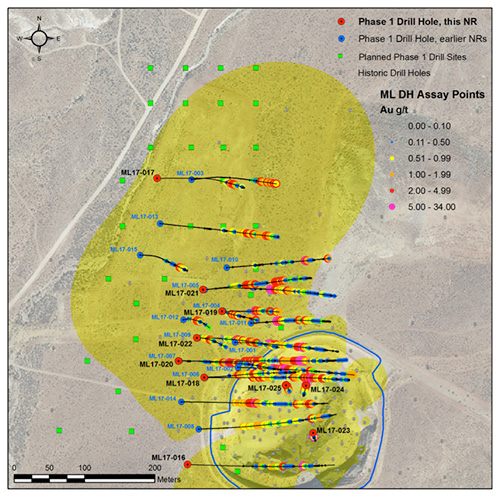 Jeff Pontius, President and CEO of Corvus states “As we continue to receive results from the Mother Lode deposit, the continuity of this new Nevada gold discovery is exciting with not one drill hole missing mineralization to date. The thickness, high grade and extent of the deposit improves with each round of results.  The start of our expanded 2018 Phase II drill program is exciting as we continue to march the deposit to the north and west as well as assess the depth extent of the system.  Mother Lode is exceeding our expectations and developing into a major new Nevada gold discovery.”

Phase I – Mother Lode Significant Drilling Results – Main & North Targets
(Reported intercepts are not true widths as there is currently insufficient data to calculate true orientation in space. Mineralized intervals are calculated using a 0.3 g/t cutoff unless otherwise indicated below)

The work program at Mother Lode was designed and supervised by Mark Reischman, Corvus Gold’s Nevada Exploration Manager, who is responsible for all aspects of the work, including the quality control/quality assurance program.  On-site personnel at the project log and track all samples prior to sealing and shipping.  Quality control is monitored by the insertion of blind certified standard reference materials and blanks into each sample shipment.  All resource sample shipments are sealed and shipped to American Assay Laboratories (“AAL”) in Reno, Nevada, for preparation and assaying.  AAL is independent of the Company.  AAL’s quality system complies with the requirements for the International Standards ISO 9001:2000 and ISO 17025:1999.  Analytical accuracy and precision are monitored by the analysis of reagent blanks, reference material and replicate samples.  Finally, representative blind duplicate samples are forwarded to AAL and an ISO compliant third-party laboratory for additional quality control.  A qualified person, has verified the data underlying the information disclosed herein, including sampling, analytical and test data underlying the information by reviewing the reports of AAL, methodologies, results and all procedures undertaken for quality assurance and quality control in a manner consistent with industry practice, and all matters were consistent and accurate according to his professional judgement.  There were no limitations on the verification process.

Corvus controls 100% of its North Bullfrog Project, which covers approximately 72 km² in southern Nevada.  The property package is made up of a number of private mineral leases of patented federal mining claims and 865 federal unpatented mining claims.  The project has excellent infrastructure, being adjacent to a major highway and power corridor as well as a large water right. The Company also controls 140 federal unpatented mining claims on the Mother Lode project which totals 1,147 hectares, which it owns 100% of.