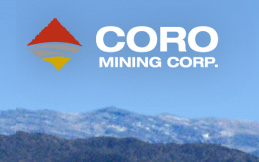 Coro Mining Corp. (TSX:COP) is pleased to announce that it has signed a Letter of Intent with ProPipe SA, an engineering firm based in Santiago, Chile which gives ProPipe the right to earn up to a 50% interest in the Berta property, located approximately 20km west of the village of Inca de Oro, in the III Region of Chile. Coro also announces that it has renegotiated the terms of its underlying option agreement to acquire Berta, by reducing the payment due on 10th June 2013 from US$1,500,000 to US$500,000 and the final payment due on 10th June 2014 from US$3,500,000 to US$2,500,000. A 1.5% NSR will now apply to all production from the property.

Alan Stephens, President and CEO of Coro commented, “We are delighted that ProPipe have agreed to become our partner on the Berta project, and are confident that their extensive Chilean engineering experience will result in the expeditious development of an operation capable of producing approximately 5,000 tpy copper cathode, on a highly cost effective basis. ProPipe carried out the Company’s recent NI43-101 resource estimate technical report and as a result are fully familiar with the project. We hope that Berta will form the basis of a new business partnership which will combine Coro’s demonstrated ability to identify new projects, and ProPipe’s capacity to develop them efficiently and will be the first step in building a sustainable cash flow generating business for the Company.”

Victor Araya, Director of ProPipe commented, “We are very pleased to have the opportunity to participate in the development of Berta, and wish to advance it to a production decision as soon as possible. ProPipe look forward to establishing a relationship with Coro, and hope that it will lead to new opportunities to build a high technology, performance mining business in Chile in the future.”

Within 10 days of signing the LOI, Coro will form a new company, NewSCM and transfer its rights to the Berta property.

ProPipe may earn up to 50% of the shares in NewSCM by completing a series of payments, work commitments and project financing, thereby earning percentages of that company as follows;

Coro announced a NI43-101 compliant resource estimate for the Berta Sur area, in its news release NR12-19, dated December 6th 2012 and the results of preliminary metallurgical test work in its news release NR12-17, dated November 5th 2012. We see potential for additional resources on the property in the Berta Central deposits, and believe there may be potential in the surrounding district to augment these.

All final agreements have been signed with Teck for the sale of the Chacay property and we are in the final stages of registering the claims transfer with the authorities. Payment of US$2,000,000, as described in our news release NR13-03, dated April 2nd 2013, will be received upon delivery of proof of transfer to Teck, which we expect to be completed very shortly.

In light of the current difficult market conditions, Coro has elected to seek partners for its three active Chilean exploration projects. Confidentiality agreements have been signed with a number of companies, and data and field reviews completed by several of them.

The approval process for the update to the Company’s approved Environmental Impact Study submitted to the government of Mendoza, Argentina in July 2012, in relation to the San Jorge Bi-provincial Leach Project continues to progress within the applicable time frames established by the provincial regulations. The SJBP Leach Project comprises a rock quarrying operation in Mendoza province together with a processing plant located in San Juan province, for the production of up to 25,000 tonnes per year of copper in cathode. The approval sought is confined to the proposed railway line to transport ore from the San Jorge quarry to a planned solvent extraction/electro-winning plant located in San Juan. Once granted, no further environmental approvals would be required from the Mendoza government, as the quarry itself and associated crushing facilities have already been approved in the existing EIS.

The SJBP Leach Project could be operated in full compliance with all existing laws and regulations in both provinces and applicable royalties would be paid to the province of Mendoza. Additionally, as no mineral processing would take place in Mendoza, no substances banned by the 7722 law would be employed there. We continue to look forward to the approval of this simple update by the Mendoza authorities later this year, so that a further EIS for the proposed plant facilities in San Juan province can be prepared and submitted.

Alan Stephens, FIMMM, President and CEO of Coro, a geologist with more than 37 years of experience, is the Qualified Person for Coro who has reviewed and approved the contents of this news release.

The Company was founded with the goal of building a mining company focused on medium-sized base and precious metals deposits in Latin America. The Company intends to achieve this through the exploration for, and acquisition of, projects that can be developed and placed into production. Coro’s properties include the Berta copper development project and the Payen, El Desesperado, Llancahue exploration properties all located in Chile; and the advanced San Jorge copper-gold project, in Argentina.