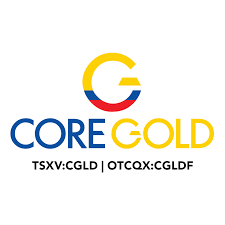 * Intervals correspond to drilled vein intervals; but figures (2 to 4) show the true widths of structures.

** Note: True width not applicable as the shape of this mineralized breccia body is unknown.

In the 2019 drilling campaign, 3,850 metres (m) of shallow near-surface diamond core holes (37) were completed, primarily directed for mine planning in Cerro Verde target with depths ranging from 26.4m to 200.65m. Three drill holes (CDH-100, CDH-101, CDH-102 – see Table 1 and Figures 1 to 4) within Cerro Verde were designed to extend previously identified mineralization in the Cerro Verde.  Samples from these three holes were assayed by a certified,  independent lab (Bureau Veritas – Inspectorate) to provide  certified assaying. All 3 holes successfully intercepted mineralized structures at Cerro Verde Prospect showing open mineralization to the northeast-southwest direction and at depth.

Comprehensive exploration drilling and geochemical sampling has been restricted due to the Company’s limited financial resources.  Mineralized intervals from 15 additional holes completed in 2019 have been sent to an independent lab for certified assaying and are expected in early Q1 2020.

“Shallow drilling has been executed to both, facilitate ongoing mine planning and extend and identify new mineralized targets.  Drill holes CDH-100, CDH-101 and CDH-102 were targeted to extend mineralization down dip and test veins over 2km of the Cerro Verde prospect.  Drill hole CDH-101 extended the Foto Vein 60m beneath the present mine level and confirmed the occurrence of a deeper hydrothermal breccia zone previously identified in CV19-28. Drilling was terminated in mineralization at 120.68m with the last two sample intervals assaying 6.69 g/t and 3.23 g/t gold. Dynasty Goldfield has obtained positive results in this year’s program. Plans and budget for the 2020 exploration drilling at Dynasty Goldfield have not been finalized,” said Mark Bailey, CEO and Director of Core Gold.

Located at the western extent of the 9km long zone of veining at Dynasty Goldfield, Cerro Verde is a 1.8km by 1.8km drilled vein array with high grade quartz hosted gold & silver mineralization associated with localized stockwork, breccia, and disseminated style gold mineralization proximal to veining, which remains open along strike to the east and southwest. Current mining from the Dynasty Goldfield Project is focused on a small portion of the Cerro Verde area with this small-scale open-pit production from the Cerro Verde area.

*Note: True width not applicable as the shape of this mineralized breccia body is unknown.

The Dynasty Goldfield Project covers an area of 13,909 hectares within 5 mining concessions. According to the NI 43-101 report from Maynard  A. (2018), the project area hosts 201 historical drill holes totaling 26,734 m of diamond core drilling (excluding the 2019 drill campaign of 37 holes for 3,850 m).  Historical drilling was completed on variable spacing extending over 9 km of mineralized strike as mapped and defined from surface soil, rock chip and channel sampling work completed from 2004 through 2007 by Dynasty Metals & Mining. In early 2017 the Company completed a name change to Core Gold Inc. and commenced small-scale production at the Dynasty Goldfield Project.

The western side of the Dynasty concessions include volcanic rocks (breccias and andesitic lavas) belonging to the Cretaceous to Palaeocene Pisayambo Volcanics and Celica Formation which has been intruded locally by dioritic rocks and mesothermal-epithermal gold bearing quartz veins and veinlets with occasional calcite-barite veins to the south, southeast and west. As many as 110 mineralized veins of varying thicknesses and without preferred orientation have been identified at the Dynasty Goldfield.

The mineralized veins in the volcanics mainly occur along a faulted zone near and sub-parallel to the contact with the Cretaceous Tangula Batholith outcropping to the east and south of the concessions.

The drilling program for 2019 was designed to intersect the mineralized structures mapped on surface, with the objective to understand the mineralization at depth. QA & QC procedures and protocols have been implemented by a certified lab to secure accuracy for these drill holes. Core samples have been shipped to Bureau Veritas Mineral Lab (Inspectorate) in Peru a certified international qualified laboratory as complying with ISO 9001:2008 (Certificate FS 34143). Fifty grams fire assay for gold (FA350-Au) and a Multi-Acid digestion ICP-ES for a package of 23 elements (4A370) were also exceuted.

Mr. John E. Bolanos, who is a qualified person under NI 43-101 regulations, has reviewed and approved the technical content of this news release. Mr. Bolanos is a technical consultant to the Company, with a M.Sc. Mining Geologist (U.K.) and a Professional Geologist Eng. from The Central University of Ecuador (honours degree). He is a registered member of the Society for Mining, Metallurgy & Exploration (SME) of the United States; Director of the Ecuadorian College of Engineers in Geology, Mines, Oil and Environment; and a member of the Mining Chamber of Ecuador. He has 29 years of experience in the exploration and mining industry throughout the Americas.

The Company is a Canadian based mining company involved in the mining, exploration and development of mineral properties in Ecuador. The Company is currently focused on gold production at its wholly-owned Dynasty Goldfield Project. Mineral is treated at the Company’s wholly-owned Portovelo treatment plant. The Company also owns other significant gold exploration projects including the Linderos and Copper Duke area in southern Ecuador all of which are on the main Peruvian Andean gold-copper belt extending into Ecuador.