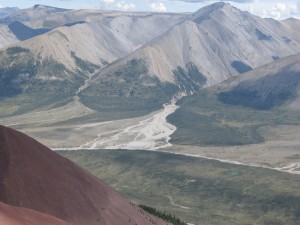 Copper North Mining Corp. (TSX-V:COL) is pleased to announce that it has signed an agreement to acquire a 100% interest in the Thor property from Electrum Resource Corporation. The Thor property consists of 8,700 hectares of mineral claims, is road accessible and is located approximately 20 kilometres south of the Kemess South mine-mill complex in North Central British Columbia. The property hosts several attractive large geophysical targets associated with intrusive complexes similar to those hosting the porphyry copper-gold deposits of the Kemess District.

Dr. Harlan Meade states that “recent geophysical survey information suggests that the Thor property has the potential to host several porphyry copper-gold deposits. Much of the target area is covered with overburden and largely unexplored. The best place to look for mines is adjacent to a mine; better still, is to make a discovery near a shutdown mine where the infrastructure is in place, such as the Kemess mine mill complex. The Thor acquisition is a nice complement to the Company’s re-engineering of the Carmacks copper-gold-silver project in the Yukon.”

Under the terms of the acquisition agreement, Copper North will acquire a 100% interest in the Thor property upon making the initial cash payment of $25,000 and issuing one (1) million common shares of the Company to Electrum. Copper North will maintain its 100% interest in the Thor property by making, over a six year period, additional cash payments totalling $500,000 (for an aggregate of $525,000), issuing four (4) million additional common shares (for an aggregate of 5 million common shares) and incurring exploration expenditures on the property totalling $5 million. If the Company fails to make a scheduled payment of cash or common shares, title to the property will revert to Electrum. In addition, Electrum will receive a 2% Net Smelter Return which is capped at $5 million. The Company agrees to pay an advanced royalty payment of $1 million if commercial production is not attained in respect of the Thor property before the seventh, eighth, ninth, tenth and eleventh anniversaries of the acquisition agreement. The acquisition agreement and Copper North’s obligations thereunder, including the initial cash payment and issuance of commons shares of the Company, are subject to approval of the TSX Venture Exchange.

The Thor property straddles the Moose River fault, a large regional structure, with small intrusions and associated alteration zones containing copper and gold mineralization in the East block. The area to the west of the Moose River fault is covered with extensive overburden cover. Aeromagnetic data suggests that the West block is underlain by a large intrusive complex characterized by increased magnetic susceptibility. Wide-spaced lines of Induced Polarization cover part of the West block and defined chargeability anomalies within the interpreted intrusive rocks. The chargeability response and coincident reduced magnetic susceptibility are characteristic of the alteration and mineralization of porphyry deposits.

Additional Induced Polarization surveying is planned for summer 2014 to complete coverage in the West and East blocks and better define targets for drill testing.

The technical information in this news release has been reviewed and approved by Dr. Harlan Meade, P. Geo. who is a “qualified person” as defined by National Instrument 43-101.